I Went to a Show's Co-Founder Jess Luther Talks Blogging, Two Years In 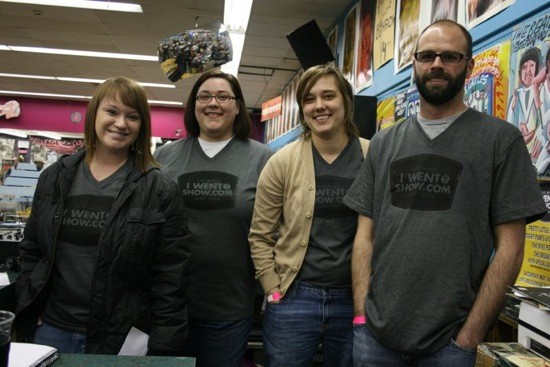 Ed. Musicians may get all the groupies, but there is more to a city's music world than people wielding instruments. To name a few: venue and studio owners, show promoters, assorted enthusiasts and -- the subject of this series -- bloggers.

In Music Blogs of St. Louis, we'll talk to the humans behind the computer screens about who they are, why they do it and some highlights of their experience.

I Went to a Show is a St. Louis bred music blog created by Jess Luther and Dave Baker. This weekend, IWTAS will celebrate its two-year anniversary at Off Broadway with Pretty Little Empire, Scarlet Tanager and Thankful Tree. It's PLE's first show in several months; the band's been holed up in the studio working on an upcoming full-length. The proceeds from the show will help fund that record. You can preview a new track on the IWTAS site right now.

A little over two years ago, a friendship formed when Baker and Luther realized they were tweeting about the same shows. Then Baker suggested he and Luther create a blog to document the St. Louis music scene.

"He came to me in May of 2010 and asked if I knew a bit about writing. I knew a little bit. And he knew a little bit about computers. But, we knew a lot about local music." says Luther. In June of 2010, ITWAS added Julie Dill, and in January of 2011 added Annie McCance to its repertoire. "The production on the web site has really increased vastly since we made it into a team of four. Annie designed the website. Julie is leaps and bounds a better writer than I am, and Dave is the networker. Everyone has their strengths. Collectively we're a lot stronger than we are individually."

The group focuses on disparate music genres, "Having four people with four different perspectives, and four different opinions on the types of shows they like to see allows us to expand our coverage." The result is an enthusiastic, often hilarious hodgepodge of reviews, previews, and the occasional report. As they gear up for their two-year anniversary party, Co-Creator Jess Luther spoke to RFT Music.

First Entry: May 25, 2010. "I know the writing was horrible. If there's an advice section in this, I say don't be afraid to put something out there and know you'll get better. The first blog post was about the now defunct band Theodore. They've since split into two different acts. At that time, Theodore was really high in the local popularity list-they were really loved. It was hosted by the Luminary, and they played downtown in front of a large art installation. That show really got me interested in music, and going to live shows."

Purpose: "To get more people to St. Louis venues and to help local musicians support their creative process."

Why That Focus: "I think we when first started, it was, 'Hey, let's start a blog. Blogs are cool.' Our mission, our goal, to directly support local musicians by going to shows came about after being at a ton of shows for the blog. We think that if we are personally interested, personally invested in what is taking place, that it will translate.

Tools of the Trade: "Once Julie composed a blog post of tweets. Sometimes we do a straight-up review. Other times we'll do a review mostly in pictures. You play to the skill set you have."

Favorite Entry: July 13, 2010. "I attended the second crawfish boil at Off Broadway. It was an incredibly fun day and night. Fattback performed. Fattback was lead by Dave Hagerty. Maybe two years ago he was killed in a car accident. I didn't know him personally, but I know he was really important in local music. I just remember how much fun he was having on stage. I have great memories from the night, and Fattback was a part of that."

Best Thing About Blogging: "It takes the Internet and makes it real for us. We have had the opportunity to meet a ton of musicians we admire. Moreover, as corny as it sounds, we've made really great friends. If you blog with sincerity and are willing to represent your blog with people, with real people, than I think it can be a humanistic enterprise. And it can be rewarding."

Biggest Difficulty in Blogging: "Two challenges we run into are: time and presenting something in a way that doesn't sound contrived. A big challenge is sitting down and investing your time on a weekly or daily basis for something you are doing for the love of it. ITWAS is ad-free, we don't get paid or attempt to get paid for anything we do. We all have full-time jobs. Conveying our sincerity is always difficult. It's easy to do face to face, but trying to convey what it feels like at a live show over the Internet is a difficult process.

Perk of the Job: "One thing I always like is if we are lucky enough to catch a band right before they start blowing up, so to speak. I love getting the chance to talk to a band or go to a show that's excellent. I love that feeling of wanting to tell everyone about a great band."

What to Look Out For: "Our blog's second anniversary party is happening at Off Broadway on Cinco de Mayo. Pretty Little Empire is headlining. The Thankful Tree and Scarlet Tanager are playing as well. It's $10 to get in and the money goes to help finance PLE's new record. We get to help out a band we love, and we get to have a birthday party."

Why You Should Start a Blog: "Starting a blog gives you the chance to use the Internet to connect with people in real life. And you have that feeling of creating something that is your own."