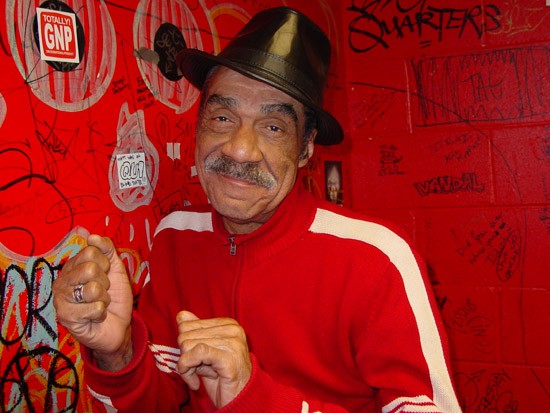 In the sordid and tangled history of popular music, Andre Williams is a larger than life figure, a prolific - to the point of incalculable - songwriter and a living and breathing Stagger Lee of R&B if ever there was one. In the '50s and '60s he wrote, produced and recorded for scores of labels big and small, developing, out of necessity, a slyly rhythmic spoken-word delivery that's rightly viewed as one of the earliest templates for rap. Words like "dirty," "funky" and "nasty" barely scratch the surface of what he brought to cuts like "The Funky Judge," "Shake a Tail Feather," "Jail Bait" and "Bacon Fat." These songs are not novelties. If rhythm and blues has an unconscious, Andre Williams, the Black Godfather, was hardwired to the id. At the age of 75, he still is.

Williams' return to St. Louis for a show at Off Broadway (3509 Lemp Avenue, 314-773-3363) on Friday, May 4, is notable for a few reasons. First, he'll be screening Agile, Mobile, Hostile: A Year with Andre Williams, a documentary about his recovery from addiction and return to performing and recording. Secondly, he's touring in support of a new album, Hoods and Shades his fourth studio album for the Bloodshot label. Third, he's Andre Fucking Williams. If you really need more reasons to see the man, read on.

Roy Kasten: Let's talk about how you got started in Detroit.

Andre Williams: When I got out of the navy I had to figure out what to do with the rest of my life. I couldn't it figure out until I got broke. And then I had to figure out how to make some money. I was walking down the street one day, noon I guess it was, and I seen a sign on the Warfield Theatre that said: "Talent show tonight. $25 to the winner." I said, "I'm gonna go in there and win that $25." I went in early that day and sat there all day, writing the song that I was going to sing. That night I won the talent show. So I had the right to participate the following week, and I won six weeks straight. The owner of the theatre was friends with Ms. Brown of Fortune Records, and she said to Ms. Brown, "You have to hear this guy." She came to my last week at the theatre and signed me right there.

You've written so many songs, but even with the big songs, "Twine Time" and "Shake a Tail Feather," you were often in the shadows. Other people were having most of the hits.

I knew I was with a small company. At that time other people with larger companies were covering the songs that were recorded for smaller companies. Those artists had the wherewithal.

Can you talk about working with Berry Gordy? The two of you didn't always see eye to eye.

Berry was a fantastic businessman. He was very strict and I've always been very loose. I'd take a chance on anything. But with Berry, you learn by the rules. I just couldn't deal with it. I would deal with it for a little while and then I'd leave or he'd kick me out of there. Then I'd go back, work a little while, then go to another company. And then soon as I got something going with that company, he'd hijack me back to his company!

How did you develop your spoken delivery, with that sense of rhythm and storytelling?

Truthfully, I wasn't the world's greatest singer. But I could tell a story. So I would pick a good story, get a good beat, a good rhythm, and put them together. I'd put on a bright red suit and red shoes, and go out there and get money! [Laughs.]

The new record Hoods and Shades, has a stripped-down sound, with acoustic-guitar rhythms driving it along, but then you bring in these funky sounds on top of it. The contrast is pretty dramatic.

Oh man. You're a genius. Folk funk! I've never thought of it that way!

In that song "Swamp Dogg's Hot Spot" you tell a story from way down south. How do you pull those images together?

If you've ever been down to Louisiana, it has this mystique that no other state has. It's swampy, wet and mysterious. It's that voodooism. I don't know if that's a word, but that's Louisiana. That was my concept. I thought about a bunch of swampy people going to a funky blues house. Can you imagine that? Maybe 20 guys, getting into their old 1957 station wagon, going into the woods to a real swampy night club, just one microphone, one loud speaker, maybe 14 tables and big buckets of beer. I just added a little sugar to the story, to make it palatable.

You want it to get played on the radio.

Yeah, you got it. And that takes me back to the challenge with the song "Shake a Tail Feather." I had that song in mind, but at first I didn't know it would be "Shake a Tail Feather." At that time the young girls were shaking their booties. But you couldn't say that on the radio. That's how clean the radio songs were. So I had to figure out how to say "shake your booty" without saying "shake your booty." Shake your tail wouldn't fly. But then I put a feather on top of the tail, and that cleaned it up! [Laughs.] That's how I slipped through with that one.

In St. Louis we'll be getting a chance to see the new movie Agile, Mobile and Hostile. Can you talk about how that came together?

It's really my life story. It was a young couple out of Los Angeles [Tricia Todd and Eric Matthies]. They were screenwriters, producers, and they approached me. They had heard about the struggles that I have been through and survived. They approached me and asked me if I wanted to relive those days in the film. At first I turned them down. I said, "Hell no. I don't even want to remember that." But then I heard the nickels and dimes jingle, and I figured, OK let's give it a try! [Laughs.] They came up with the idea and the finance and they just followed me around the world and started filming my rehabilitation process. I was going back into real life, coming out of that life of torture. And I do mean torture.