Beach Boys Pull Out All the Stops for Reunion Tour, Including Enlisting John Stamos 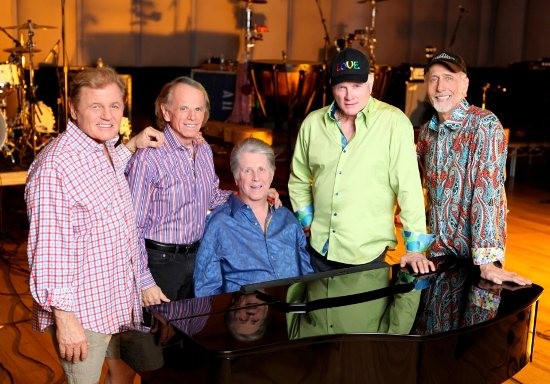 When it comes to the ever-subjective exercise of ranking the greatest bands of all time, The Beatles tend to be the default number one. Number two varies: Some would pick an obvious choice like the Rolling Stones or Led Zepplin, while others would pick a less universally popular band with great influence such as the Kinks or the Who.

But a solid contender for the somewhat-coveted number two spot would be the Beach Boys, the bodacious band that composed some of the greatest music of any age. This is a group, after all, that wrote catchy tunes about surfing and the sheer essence of longing and love. And more importantly, the members were intensely impressive musicians that influenced countless bands throughout the years.

Since most of the Beach Boys' biggest hits came about in the 1960s and 1970s, it would be easy to assume that group's best days faded long ago. But the group has been playing shows in various incarnations for the past couple of decades, including a worldwide tour that kicked off last week in Arizona. Previously feuding band members managed to patch up any hard feelings to get together for the group's 50th anniversary.

For whatever reason, the band didn't include a date on its tour that comes through St. Louis or any part of Missouri. But if anybody from the region decides to travel to the band's concerts, here are a few things to know about the band's latest tour:

Brian's back: The return of Brian Wilson to the fold is probably the most notable aspect of this tour. Wilson, of course, became something of a recluse during part of the band's history, so much so that it inspired a fairly popular Barenaked Ladies song. He was part of the Beach Boys until the 1990s, when he went through an especially bitter split with group. While several members toured as the Beach Boys, Wilson released Smile to extensive commercial and critical success.

Since Wilson wrote or co-wrote some of the Beach Boys' biggest hits, his return gives the tour an aura of credibility that's arguably been missing since he embarked on a solo tour.

And so is everybody else: Since the early 2000s, the Beach Boys have effectively consisted of Mike Love, Bruce Johnston and a bunch of touring musicians. But other members of the band that were around in the 1960s - namely Wilson, Al Jardine and David Marks - are returning for this reunion. Johnston, by the way, wrote Barry Manilow's "I Write the Songs," which won the Grammy for Song of the Year in 1977.

A full reunion of the original band is impossible, since both Carl Wilson and Dennis Wilson are deceased.

New album: Unlike other bands that reunite only to tour, The Beach Boys will release That's Why God Made the Radio on June 5. The band's first single - called, appropriately, "That's Why God Made the Radio - is reminiscent of some of the band's more soothing hits such as "In My Room" and "I Just Wasn't Made for These Times." The latter tune was recently featured on a rather bizarre episode of Mad Men.

Absolutely massive setlists: Any band that's been around for five decades possesses a lot of material. And St. Louis residents venturing to parts unknown to see the band will almost certainly be getting their money's worth. The group's shows have typically stretched for over 40 songs, encompassing early hits such as "Surfin' USA" and "Good Vibrations" and more recent tunes like "Kokomo." And unsurprisingly, the band is slipping in some material from the new album.

And for the amount of songs, the shows aren't that bad of a value depending on the specific seats. Including fees, tickets for the Chicago show are anywhere from $54.07 to $271.53.

John Stamos?!: The Beach Boys made a rather memorable appearance on Full House back in the day. And Stamos - who is also a reasonably talented musician - has been touring with the band off and on for years. The band asked Stamos to tag along for this tour, along with a gaggle of other back-up musicians. Cut... it ... out!

If all of these things aren't enough to hype up The Beach Boys' latest tour, maybe this will do the trick: