Six Best Songs About Work For May Day 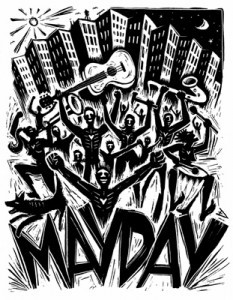 Today is May Day, also known as "International Worker's Day." To celebrate, kick your feet up and read our list of the six best songs about work. Feel free to let us know what your favorite working class songs are in our comments, just make sure the boss isn't looking.

It may be impossible to separate the song "9 to 5" from Dolly Parton's movie of the same name, and that's fine. The film 9 to 5 uses humor to bring attention to issues of women in the workplace, sexual harassment, and unfair business practices. The song "9 to 5" is more universal, trading out a specific boss character for a vague overlord known as "the man" and appealing to people of both genders who can relate to the monotony of the daily grind. The worst aspect of "9 to 5" is that it's too good as a pop song. You probably haven't heard this song in years, now good luck getting it dislodged from your cranium.

5. Todd Rundgren - "Bang On The Drum All Day" "Bang On The Drum All Day" is an oddball song in Todd Rundgren's generally serious catalog. The tune is really a musician's anthem. Swap "drum" out for any instrument and you get the illogical, impractical, immature attitude necessary to attempt to play music for a living. It's also one of the few songs that spends equal time complaining about work and looking forward to funner times, replete with a murder fantasy: "I get my sticks and go out to the shed / And I pound on that drum like it was the boss's head." We can all sympathize with that desire, although most of us don't imagine that bashing in the boss's skull would sound like synthesized steel drums.

4. Elvis Costello - "Welcome To The Working Week" Like most of Elvis Costello's songs, "Welcome To The Working Week" is not as simple as it seems. There are sideplots about fame and family and life in the big city. But none of that matters when that hook drops and Costello sings the song's title followed by "I know it don't thrill you, I hope it don't kill you" with a hyper doo-wop backing track. Clocking in around a minute and a half, "Welcome To The Working Week" is short and sweet, unlike your commute or your shift. 3. Talking Heads - "Don't Worry About The Government" David Byrne's character does not complain about his job in "Don't Worry About The Government." He loves his job, which is what makes the song so discomforting. Byrne's repetitious device - ending a line with a noun, starting the next line with the same one - comes off as compulsive, as does his unending love for his building. "Government" perfectly portrays the workaholic, all the way down to the generic sentiment of "I'll be working, working, but if you come visit / I'll put down what I'm doing / My friends are important."

To some, "Maggie's Farm" is about having a crappy job. To others, it's about slavery. To Bob Dylan, the two are practically the same.

1. Loverboy - "Working For The Weekend"

Forget the following things: the decade, the laughable hair and clothes, the lack of other hits in Loverboy's catalog. With those ideas banished, "Working For The Weekend" is downright incredible, particularly the way the moody verses and joyous choruses echo the track's weekday/weekend dynamic. "The Weekend" is a metaphor for the reasons we work, for our families and friends and passions. So in addition to having a hook sharp enough to snag a marlin, "Working For The Weekend" is the best song about work because it puts the necessary evils of employment into perspective.