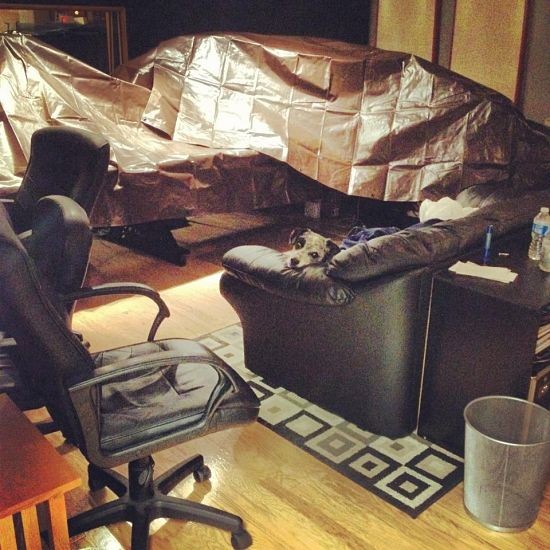 Undoubtedly you're already aware of the hailstorm this weekend. If your property did not suffer any damage, then at the very least your Facebook feed was likely filled with photos of hands holding up golfball to baseball-sized rocks of ice. On one news story I saw they reported all the way up to "teacup" sized hail, which seemed to me a strange choice for a unit of measurement, but I digress.

St. Louis's Firebrand Recording Studio -- winner of RFT "Best of" awards and go-to spot for many of our city's finest recording artists -- saw massive chunks of hail break through the skylights of their building, punch through the drop ceiling tiles and bombard the inside of their studio. "All things considered, it coulda been a lot worse, " says co-owner / operator Brian Sheffer. "If we hadn't capped the skylight in the live room the drummer and drums would have been getting hit with hail falling at terminal velocity." 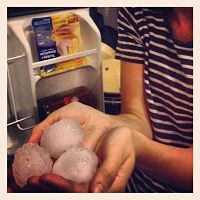 "We were actually up here tracking. I was working with a band and we were recording some drum tracks at the time," continues Brian. "We started hearing crazy things -- the building was getting pummeled with hail -- so we stopped the take that we were in the middle of and went to the front window, where we watched our cars get destroyed. Two of the three of us had our back windows smashed completely out - literally tennis ball, baseball sized hail. We scrambled to start fashioning trash bag tarps to keep water out of our cars, and as we're doing this i had the 'listen mic' on in the control room. I suddenly hear water running in the listen mic and i'm like 'fuck' and immediately stopped caring about my car, you know?"

"So I go into the live room and there's a stream of water dripping right onto the floor tom," Brian goes on to say. "I immediately get our trash can, dump the trash out of it and put the can on top of the floor tom to catch that water. As I'm doing that i hear another stream of water starting which is conveniently landing on a case of microphones, so I grab those and move them aside. The thing is there's some skylights in our building -- theres four in our space -- so all of those got smashed out. The one in the live room is capped to keep rain sounds and external sounds from getting in, but it still leaked."

Though the building itself sustained some serious damage, the wealth of musical and recording equipment housed within came away clean. "Nothing got ruined," says Brian. "A few amps got a little water on em, but as long as you don't turn 'em on until they dry out its ok. There's a few drops of water on a few things but nothing that scared me. We dodged a bullet. We were fortunate in that it really worked out in the best way possible."

So the studio itself is fine, save for a minor leak or two. As for Brian's car? "Every panel on it sustained damage. My windshield is totally fucked and the back window is in the back seat. If I had been at home I would have been mad about it, but at the studio all I cared about was the gear. We came away relatively unscathed so I can't be too upset. It turned out as good as it could."