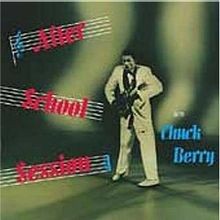 Chuck Berry entered the music scene at a time when singles were the predominant manner of disseminating music. That's probably why the St. Louis native is known more for individual songs than, say, a seminal album.

But while songs such "Maybellene" and "Johnny B. Goode" get the lion's share of attention from music aficionados, it should be noted in the sacred scrolls of rock and roll history that Berry has released over twenty studio albums. In fact, Berry's first album that only featured his music - After School Session - was released on this day in 1957.

True, some would consider the soundtrack to Rock, Rock, Rock - which featured indispensable "Maybellene" and "Roll Over Beethoven - to be Berry's first album. But that record - which was the first LP released by Chess Records - also featured tunes from the Moonglows and the Flamingos. In a testament to how much of a novelty LPs were back in the 1950s, After School Session was Chess' second LP ever released.

And in another example to how the music fans were accustomed to procuring singles, pretty much all the tracks on After School Session had been released in some form or fashion. "School Days" and "Brown Eyed Handsome Man," for instance, were released as A-Sides, while "Too Much Monkey Business" and "Wee Wee Hours" were B-sides to more popular songs.

[If "School Days" sounds strikingly familiar, that's because Berry ended using the same arrangement for "No Particular Place to Go."]

After School Session was not Berry's most commercially successful album. That honor goes to The London Chuck Berry Sessions, which is Berry's only album ever to be certified by the Recording Industry Association of America. And it's the record that included "My Ding-a-Ling," the only Berry tune ever to go to number one on the Billboard Hot 100. But while The London Chuck Berry Sessions wasn't universally loved, there's plenty to like about After School Session. As Allmusic's Bruce Eder correctly notes, the record displays Berry's diverse musical palate: "School Days" is a toe-tapping joyride with a little bit of narrative, while "Wee Wee Hours" is a slow-cooked jam that seethes with emotion. Berry even managed to infuse some Caribbean influence into "Berry Pickin'" and "Havana Moon," which seemed to conform to the tastes of the day.

No, After School Session isn't as sublimely cohesive as Sgt. Pepper's Lonely Hearts Club Band or as intricate as Pet Sounds. But it is testament that Berry's role in popular music wasn't just as an innovator. He was also a musician with enough creativity to put out great-sounding songs that didn't feel monotonous.

For the purpose of sprucing up a dreary Tuesday, here's a vintage Berry performance of "School Days:"

Chuck Berry This Day In History