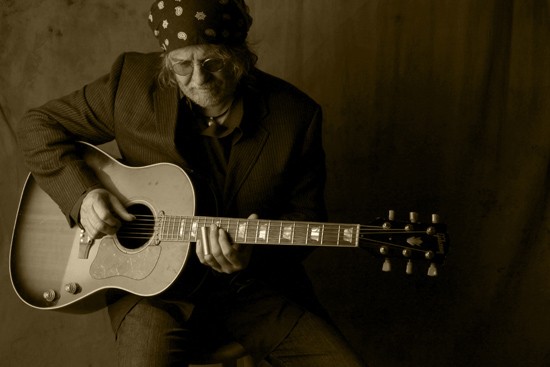 In the interest of full disclosure, I've known Ray Wylie Hubbard for going on 15 years, have crashed at his home in the hills of Wimberley, Texas and once rode on his tour bus (OK, it was borrowed) to one of Wille Nelson's picnics. I consider him a friend, in the same way, I suppose, I would consider the Nazarene a friend if there were any persuasive evidence he ever existed.

The evidence of Ray Wylie Hubbard's existence is all over his latest album, The Grifter's Hymnal, his ninth studio release since the breakthrough Loco Gringo's Lament, a 1994 collection that demonstrated just how much could still be done with the well-worn Texas songwriter tradition. Hubbard was an outlaw but he has ditched the cant for spiritual storytelling, visionary poetry and, above all, an original reworking of the country blues, all nourished by his exposure to great Texas bluesmen like Mance Lipscomb and Lightnin' Hopkins.

Of course when he does a show people will still call out requests for "Up Against the Wall Redneck Mother," and sometimes he'll oblige - the notorious song has paid a few bills - but mostly he just wins listeners over with biting wit, ravishing images, serpentine stories and grooves so ugly and primal they should be growing scales.

Roy Kasten: Don't take this the wrong way, but there's a sense that musically you're devolving, getting more primitive, reducing things. I can't imagine any songwriter your age, with the exception of maybe Neil Young or Iggy Pop, really pulling that off.

Ray Wylie Hubbard: I think the next record is just gonna be a bunch of sticks on a hollow log, a bunch of groaning and yelling. But other people, especially musicians, have said the same thing, that it's going back to a primal place. It's like the old saying, "the deeper the roots, the stronger the branches." I feel fortunate that I got to see Mance Lipscomb and Lightnin' Hopkins and Freddie King and Ernest Tubb. Going back and trying to honor it and be aware of it, that's where I'm at with my music.

With players like Rick Richards and George Reiff, you don't have to coach them, but it's still hard to capture that in the studio. How did you go about it?

It's like the way the record starts: "Say a prayer to the old black gods." We went in with the idea that those guys, Muddy Waters and Howlin' Wolf and the Stones, the first few records, and the MC5, the rawness, it was this vibrant feeling, it was real, just guys playing instruments. They weren't sloppy but they were real. We just took out the lip smacks and the coughs and the string squeaks. We're acknowledging those old great rock and blues and country records. We knew we wanted to make a bare bones album. I'm not a rock & roll guy, but we wanted to make it rock.

On the song "Lazarus" you sing the lines, "We're in the mud and scum of things" - but unlike Lazarus we "don't have to think twice about dying." Me, I think about it four or five times every other hour.

I've sort of gotten over my own mortality. The fear of death and the unknown, you have to think about it. There's old Lazarus, he died and Jesus brought him back, and, "Oh man! I gotta do this all again!" But I look at things through a fun house mirror. I have this warped perspective on being in this funky old world.

Your hell-raising days are long behind you, but do you feel like you have to tap into that, the fear and the anger, to write and play these songs?

I think now it's writing fearlessly, not worrying about the consequences. The type of writers I respect are fearless. They're not thinking about the future or reviews, but they're just writing in that moment. Back when I was drinking and doing drugs, I was pretty fearless. But my songwriting was crap! [Laughs] I'd come to and look at what I'd written and think, "What the hell is this? I can't read this!" Now I can write with reckless abandon. I have a foot in both worlds. You know what I'm saying. I'm able to get back into that spot, back when I was just hanging on to the steering wheel and seeing where the vehicle would go.

A lot of your songs are "praise songs" - that is you're giving thanks to the people, the musicians, the records, the sights and sounds that make life worth living. And you do it really directly, you're not self-conscious about it. You'll name check Fats Waller or your son Lucas or your drummer Rick, or an AC30 guitar amp.

I write what I know about. I like guitars and amps. I'm very aware of the roots and all these people, what an influence they were. I just want to acknowledge that. It's cool when you can throw in a lyric and mention Fats Waller and Gibson. I enjoy that. It's not like namedropping Kim Kardashian. That's pretentious.

Some of the songs on Grifter's Hymnal push into new themes, especially "Red Badge of Courage," which is a harrowing song about the life of a young soldier.

I was reading What It Is Like to Go to War by Karl Marlantes. I didn't go to Vietnam, but I had friends who did. I read that and I applied it to these kids who are coming back from the war now. And bringing back all that trauma. What do you say to them? They come back haunted by the whole deal. They're kids doing the dirty work for the failures of old men. I felt like I needed to say that.

How did you cross paths with Ringo Starr?

When Snake Farm came out, a fellow named Brent Carpenter, who did a lot of video work for Ringo out in California, burned a copy of it for him. Ringo liked it and did this video at the time about what he was listening to -- Bob Dylan's new record and the mono Beatles thing -- and he also mentioned Snake Farm. So that was cool. I was in a pretty good roster there. We were out in California, playing McCabe's, and Brent called and said Ringo wanted to meet me. He was really impressed that I travel with just a drummer. "He travels with a drummer! Not a guitar player or a bass player. Just a drummer! He's brilliant!" [Laughs] So we went out to the Greek Theater and he asked me to come out and sing on the last song. But he didn't tell security that he'd asked me. Billy Squier looked at me and nodded his head, so it was cool.

We ended up going back out there, and going to his house in Beverly Hills. It's not a big mansion, it's a one-story ranch house with a great view. We were just hanging out and talking. I told him I really liked his songwriting. "What do you mean?" he said. "Nobody thinks of me as a songwriter." I told him I really like "Coochy Coochy" from Beaucoups of Blues, and we decided to record it. He said, "I'd like to hear that!"

So when we were recording the album, we just kind of turned on the machine, got in the groove, did it live all the way through. We sent it to Ringo, and he called and said, "I love it, but the drums are so good. I don't need to play drums. Maybe I'll just sing and play shaker." So we did that, and he doubled his vocal, which is what they did on all those Beatle records. The thing is, he doesn't need the money. He just does it because he loves music. So I've got a Beatle on my record.

You've become a mentor to young songwriters like Hayes Carll and Lincoln Durham and the guys in Band of Heathens. What's the first thing you tell them when they ask for advice?

If they ask me about songwriting I'll say, "Read The Grapes of Wrath but don't listen to The Ghost of Tom Joad." Go back to the roots. Of course with the Heathens, they were already really good when I met them. I produced their album, just put a little air and space in it. With Hayes and Lincoln, I showed them some finger-picking patterns, maybe how to make an E chord without the third. They just took it and ran with it. Usually, it's more like: Here's some advice I won't be using.