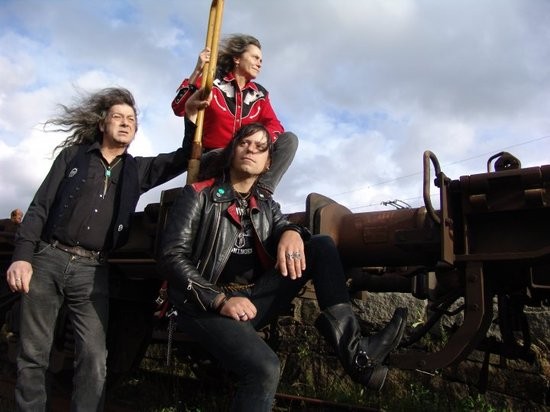 Ever have one of those nights when leave a concert thinking, "man, I am getting too old for this?" Sure you have, and Fred Cole's got the antidote for that decrepit feeling. Here's a guy who turns 64 this August, who's been recording and performing continuously since 1964. What's your excuse, Junior?

In 1987, Fred formed Dead Moon with his wife, bassist Toody, and spent the next 19 years recording, touring, and operating a guitar shop in their native Clackamas, Oregon during downtime. Dead Moon wound down in 2006, but like lifetime workaholics who can't hack retirement, Fred and Toody formed Pierced Arrows just a few months later with drummer Kelly Halliburton, whose dad had previously played in some of Fred's bands. The AARP should hire the Coles to give motivational speeches.

The three members of Pierced Arrows play rock and roll for all the right reasons, but chief among them: because they have to. Otherwise, why drag themselves on a nationwide tour and play for small crowds? However, they made their debut St. Louis show a real treasure for the few dozen of us who gathered at the Gramophone last night. Quite simply, no other band does 1960s-style garage rock quite so well. Over the course of their set, they summoned the spirit of Northwestern garage pioneers as the Sonics and Wailers, as filtered through a Crazy Horse-style tuneful/primal crunch.

Pierced Arrows' recorded material tends to be a little less raucous and frenetic than Dead Moon's, but in no way have the band members mellowed with time. This was clear from the opening song, "Guns of Thunder." Over sheets of guitar, Cole screamed like a man condemned for eternity. He possesses a trademark yowl that's as haunted as Roky Erickson, although a little more earthbound. On "Paranoid," he demonstrated an ability to leap from an Iggy Pop-esque croon to a desperate scream without missing a beat. Occasionally he and Toody would harmonize, and the result was rough but sweet. This was especially true on "Ain't Life Strange," a love song that audibly had the weight of more than four decades behind it. In between songs, all three members chugged cans of PBR (the drummer managed to put away an entire 16-ouncer between songs).

I came away feeling as if I'd had a refresher course in raw rock and roll. The Coles are a rare direct link through nearly half a century of musical history as lived in real time. As rock music continues to morph into the blues or jazz - that is, an art form that remains influential even as it loses its cultural prominence - their example is more necessary than ever. May Fred and Toody Cole live to be 100 years old, and may they embark on a Pierced Arrows tour to celebrate that birthday.

Critic's Notebook: Local opener Doom Town performed an especially energetic set, featuring an ultra-charged cover of the Mekons' "Where Were You?"