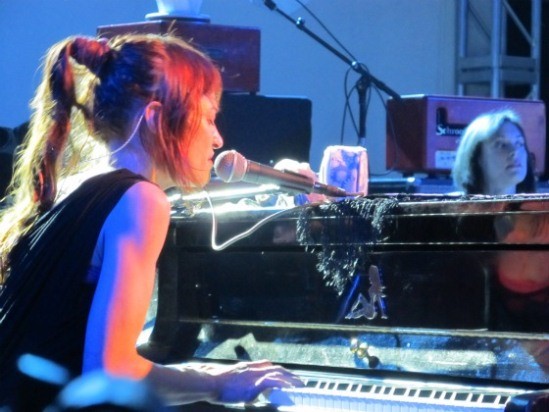 Fiona Apple is in an elite club of critical darlings that persevered, despite finding commercial success during the 1990s. Using the word "Despite" may sound odd, since selling a lot of records should indicate that a musical artist has something unusual to offer - a boisterous voice, an instrumental skill or a penchant to attract attention.

All three of those attributes would apply to Apple. But fair or not the 1990s have a reputation for being a superficial, freewheeling time before America went to war and sunk into economic calamity. Only a few artists have emerged unscathed and stronger, long after acres of Furbies ended up in landfills. Apple fits into the category, as she managed to make her comeback in the mid-2000s with Extraordinary Machine. More recently Apple's garnered a noticeable amount of buzz for her impending album, which will be supported by a tour that includes a July 14 performance at the Peabody Opera House..

[In line with Apple's propensity for long-winded titles, her new album is entitled The Idler Wheel is wiser than the Driver of the Screw, and Whipping Cords will serve you more than Ropes will ever do. It's commonly referred to as The Idler Wheel...]

If the 1990s were glossy, "Every Single Night" - Apple's first song released from The Idler Wheel.. - is the precise opposite. It's evolution through simplification: While songs like "Criminal" and even "Shadowboxer" have a polished sound, "Every Single Night" feels intently organic. The song projects Apple's impressive vocal range over a distinctly minimalist instrumental arrangement, paired with expressive lyrics describing what's going in the 34-year-old artist's head. Not a bad topic, given the well-documented intrigue over her personality.

As of Tuesday evening, "Every Single Night" has been listened to 164,501 times on SoundCloud. It's a digital following that seems to correspond with increasing interest in Apple's live act. RFT Music writer Roy Kasten noted, for example, that the line to see Apple at South by Southwest was the longest he's seen "outside the big outdoor venue since Metallica was in town." Most importantly, Apple's musical abilities haven't waned during her hiatus: The Houston Press' Chris Hlavaty wrote Apple's "voice was a gravelly wonder, now evoking Tom Waits:"

New cuts from the upcoming album, like "On The Bound" were raw, much more raw than her debut. But Apple was never a pop singer, she's a poet who happens to sing in line with Leonard Cohen or Laura Nyro. Fifteen years since 1996's Tidal and it's wave of adulation, and half a decade since Extraordinary Machine, she's still compelling onstage, minus the technical difficulties.

As Pitchfork Lindsay Zoladz notes in the opening lines of her article about Apple's return, a Yahoo news bulletin announced the aforementioned tour as "90s Singer Fiona Apple Plays a Series of Comeback Shows." The implication is that Apple hasn't accomplished much since Tidal, even though her subsequent albums both sold well and received critical acclaim.

But if the reaction to "Every Single Night" and her live performances are any indication, Apple's return is in no danger of being relegated as a nostalgic sideshow. And St. Louis fans should have something exceptional to look forward in the middle of summer.