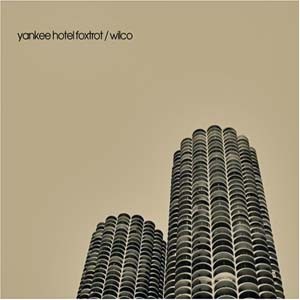 Wilco's Yankee Hotel Foxtrot is rightfully associated with excellence, a piece of work commonly heralded as one of the best albums of the 2000s. It's the type of record with enough depth, lyricism and experimentation to get people interested in serious music, no small feat for any band, and this one features members from the St. Louis area.

But great records often have back stories. Radiohead's Kid A, for instance, was created after the band went through a disorienting and punishing promotional regiment for OK Computer. And Pink Floyd's Wish You Were Here came about as the group was still coming to grips with Syd Barrett's disconnection with reality. Appropriately, the tale behind Yankee Hotel Foxtrot -- which was released ten years ago this week -- shows that a defining album doesn't come without patience or pain.

The "patience" part stems from the arduous path required to get the album released, which was documented in Zac Crain's 2001 RFT article. Yankee Hotel Foxtrot was going to come out on Reprise Records, the label that offered up Wilco's prior albums. But after an internal shakeup, the interim head of Reprise rejected Yankee Hotel Foxtrot:

Reprise's longtime president, Howie Klein, resigned on June 29, and in his absence, [David] Kahne -- the executive vice president of A&R (artist and repertoire) at Warner Bros. Inc., Reprise's parent company -- was temporarily in charge of the company. Tom Whalley was eventually chosen to succeed Klein, but, at the time, he was still running Interscope Records, with no idea what the label was giving away.

As it turns out, Whalley could have moved into Klein's old office on June 30 and the damage would already have been done. On June 29, the same day Klein resigned, Kahne informed Wilco he was rejecting Yankee Hotel Foxtrot, a decision that led to the termination of the group's contract, even though Wilco owed Reprise several more records. According to sources, Kahne listened to Yankee Hotel Foxtrot and believed it would kill Wilco's career. He was only saving the band from itself, he believed, as if frontman Jeff Tweedy ever cared whether he sold 10 million copies or 10.

A few months after Wilco left Reprise, the group streamed Yankee Hotel Foxtrot online for free. The feedback was enormous, and soon record companies were effectively falling over themselves to sign the band. The group eventually linked up with Nonesuch Records, which like Reprise was owned by AOL Time Warner.

But the decision to showcase the album online was controversial in the early 2000s, a time when the intersection of the Internet and music was still relatively unknown territory. As noted in a 2002 RFT article from Rene Spencer Saller, Tweedy felt that the decision paid off:

Contrary to all the doom-and-gloom industry propaganda, Wilco's self-bootlegging strategy didn't hurt sales when the album was officially released last April -- in fact, it debuted at number thirteen on the Billboard charts, the band's highest position ever.

"Probably the happiest I've ever been was when we were touring and the record was only available as a download," he continues. "People were really aware of our songs and knew the new music and were singing along to songs that they hadn't paid for. It created an environment where we could be very patient about signing a record deal, too. It was like we were the Grateful Dead or something. Whatever the Grateful Dead did musically is irrelevant to me, other than the fact that they probably had it more right than anybody in history about how to treat their fans."

There's another side of Yankee Hotel Foxtrot's backstory that had little to do with record company shenanigans. That's the part where drummer Ken Croomer and guitarist Jay Bennett were jettisoned from the group before the album was released. It's a part of the group's history that was chronicled in the film I Am Trying to Break Your Heart: A Film about Wilco.

[Friction between the two manifested itself in 2009, when Bennett filed a lawsuit against Tweedy. Sadly, Bennett passed away later in the year.]

Saller asked Tweedy about the lineup change in her 2002 article:

The good fit with Nonesuch isn't the only reason Tweedy's feeling more at ease these days. Before the recording sessions for Yankee Hotel Foxtrot were finished, founding members Ken Coomer and Jay Bennett were replaced by drummer Glenn Kotche and multi-instrumentalist Leroy Bach.

"I think the way the band is now is a lot more unified, and I'm way more comfortable sharing ideas in their initial stages," he says. "It's the way I've always thought it should be. I've really never been happier in a band than I am now."

In many respects, Crain was prophetic when he wrote that when Yankee Hotel Foxtrot came out "no one will care what took so long or who's releasing it." That's because the album obtained both commercial success and critical adulation. Pitchfork gave the album its coveted 10 out of 10 score. Paste Magazine ranked the album as the second best release of the decade behind Sufjan Stevens' Illinoise. And perhaps most importantly, Yankee Hotel Foxtrot was the opposite of a career-killer: Wilco went on to make a number of successful albums throughout the 2000s.

But the record is perhaps testament to how great work doesn't come without cost. And even though Yankee Hotel Foxtrot took its time to reach the masses, the musical universe is undoubtedly stronger as a result.