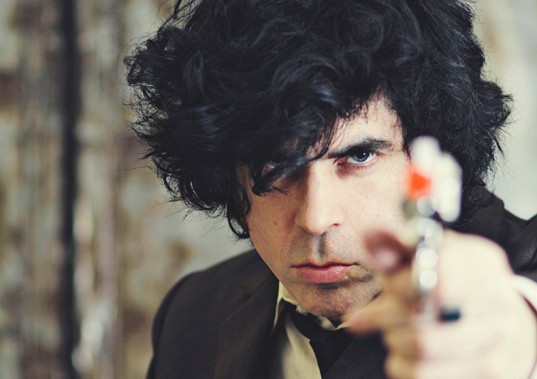 Back in the mid-1990s, there used to be an Indie-Rock Flea Market in Arlington, VA every summer. These events would attract not only music fans from throughout the Northeast, but also the local Washington, D.C.-area music celebrities. Once I saw Ian Svenonius there. He was dressed in a three-piece suit, and his hair was immaculately processed. He did not break a sweat -- and this was in August, when the D.C. humidity is so thick that you could practically chew it. He didn't just go for shorts and a t-shirt. He never broke character.

This story is a testament to just how dedicated Svenonius was, and still is, to the persona he has crafted over the past two decades. Since 1990, Svenonius has matched content-laden, theoretical lyrics to rousing music, and presented them in such a deadpan way that you're not sure whether to laugh or start breaking bank windows. His first well-known band, Nation of Ulysses, parodied such serious-minded Dischord peers as Beefeater and Fugazi by taking their slogans and ideas to an absurd extreme. With the Make-Up, he developed the concept of "gospel yeh-yeh," using American soul and gospel music as a platform to critique the ritual of rock and roll. Now, with Chain and The Gang, Svenonius and Katie Alice Greer questioning the very notions of progress and free will. This is, after all, a band that named its first album Down With Liberty...Up With Chains! At the same time, Svenonius doesn't let the meta dictate the music; indeed, he's one of the most energetic, entertaining frontmen you could ever hope to see. If you filtered the desperate cries of James Brown circa "Cold Sweat" through Marshall McLuhan, Sky Saxon and 1980s political hardcore, you'd end up with something close to Chain and The Gang.

In its second St. Louis appearance, Chain and The Gang succeeded in raising the roof. Besides Svenonius and Greer, the current lineup includes guitarist Brett Lyman, Madison Farmer on cool Danelectro bass, and drummer Fiona Campbell. Together, they lay down a spare rhythm with roots in garage-rock and soul. They could bring it up or down depending on the need. (It's amusing to imagine them being fined for errors or missed cues.) Over this musical bed, Svenonius testified, agitated and preached while breaking out some smooth dance moves. He didn't throw himself into a frenzy in the days of NoU, but who among us could after twenty years? Meanwhile, Greer gave her best Lydia Lunch wail while bopping around the stage. On songs like "Reparations," they would engage in call-and-response, resembling a politically-charged Lee Hazlewood and Nancy Sinatra. Rarely has onstage banter like "Everybody's going to die!" been quite this stirring. Or strange, for that matter.

The set ended with "What Is A Dollar?" It began as a typical I'm-broke lament, but over a long spoken-word section morphed into a comment on our current cashless society, and the chance to actually hold a dollar bill, despite being laden with "germs and cocaine" and the resultant threat of being arrested for drug possession. Somehow it was riotously funny.

Addressing the recent death of television host/mogul Dick Clark, Svenonius mused, "Who will now be America's oldest teen?" It was an odd question coming from a man who was once Sassy magazine's "Sassiest Boy in America," and who declared himself eighteen in NoU in solidarity with American teenagers. Clearly he's no longer willing to assume that mantle. All the same, Svenonius' unique mix of social commentary and straight-faced humor has endured over two decades and many incarnations, and this weekend's set showed this approach at its finest.

- How do you follow Chain and The Gang? It must feel a little like playing after James Brown on The T.A.M.I. Show if you're anyone but the Rolling Stones. That was the impossible position in which new local duo XXO found itself for its debut performance. They managed it with a quiet, sparse and brief set with prominent folk and old-timey influences. The vocal harmonies were a little uneven, and the two band members seemed unsure of themselves at times, but it all added up to a certain charm and earnestness. A very nice contrast. Looking forward to hearing more from XXO in the near future.

- In addition to serving as Chain and The Gang's rhythm section, Farmer and Campbell have their own band, Coasting. Their debut album, last year's You're Never Going Back, is ultra-catchy. They actually have played some Coasting shows on this tour, but not at Pig Slop. Another time, maybe? Campbell has also performed in St. Louis twice as the Vivian Girls' drummer.