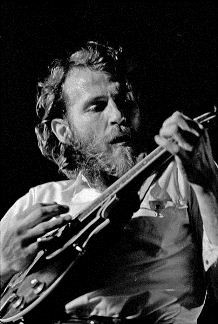 There will never be enough praise that could be directed to Levon Helm. Notwithstanding his incalculable contribution to the Band's brilliant rock & roll ride, Helm's titanic craftsmanship and distictive voice provided a heartbeat to an untold amount of musical acts. Not only did he inspire others, he helped cultivate and nurture a earthy genre of rock music.

Helm's death on Thursday from throat cancer sparked emotional tributes -- and for good reason. Helm connected himself to countless music spheres: Touring with Bob Dylan, creating an immense catalog of influential songs with the Band and luring in younger fans with his Midnight Rambles.

"Levon Helm was simply one of the greatest drummers ever," says Wilco drummer Glenn Kotche on his Facebook page. "But he was also one of the most influential musicians and important artists of our time. Levon had a depth of feel that does not exist anymore. His brilliantly economic parts, lyrical phrasing and incredible touch and tone on the drums were as unique as his song writing and timeless voice. His impact on me cannot be overstated."

That's just factoring in people that Helm personally worked with during his fantastic life. Perhaps a more striking testament of Helm's influence could be seen on Wednesday at Cherokee Street's El Leñador. That's where Middle Class Fashion, L.B. Johnson and the Cosmos and the Deadfall Fires performed at El Leñador's "Stag Night," which featured some darn good music to go along with the establishment's dirt cheap beer specials.

Near the end of the Deadfall Fires' top-tappingly exquisite set, the folksy quintet broke into a rendition of the Band's "The Weight." The original version of the song, of course, features Helm playing the drums and singing the lead vocals.

And no matter the venue or the performer, "The Weight" is still exhilarating. There's no gimmicks, no tricks, no distractions. It's just simple storytelling with a rich and harmonious feel. it's one of many songs that Helm contributed to that almost certainly inspired someone to pick up drumsticks - or a mandolin. And truth be told, not every popular musicians can attest to such influence.

If there's any solace to take in Helm's death, it's that he fought back cancer with enough bravery and ferocity to regain his voice for key period of his career. And that tenacity gave Helm critical acclaim that he was able to share with a gaggle of collaborators, including his daughter Amy. His 2007 release Dirt Farmer won a Grammy Award for Best Traditional Folk Album. And his 2011 release Ramble at the Ryman won a Grammy earlier this year for Best Americana Album.

In his review of Ramble at the Ryman, Allmusic's Mark Deming writes about just how much joy Helm had when performing later in his life:

While Levon sings (and sings well) on several numbers, there are moments when one senses the revue-style show is partly in deference to his voice, which clearly isn't as strong or as resilient as it used to be.

But Helm is still one of the most soulful drummers alive, and his work behind the kit is solid and joyous throughout, and his ensemble, capable of turning on a dime from spare and somber string band arrangements to rollicking New Orleans-style R&B, is superb, and does right by the half-dozen Band classics on the set list without slavishly copying the original arrangements.

There's no doubt Helm's prodigious and pioneering influence will inspire another generation to travel in a worthy musical direction. Rest in peace, Levon.