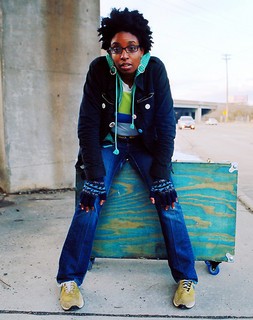 Syna So Pro has been bending St. Louis' collective mind for a while now, taking the concept of the solo act to new heights. Syrhea Conaway - the brainchild behind Syna So Pro - uses an array of foot pedals, instruments and looping technology to create a hypnotic stream of very rad experimental music.

Conaway - a finalist in the Best Solo Project category for the 2012 RFT Music Awards - has also created a series of a capella clips that incorporates songs from one local band at a time. The most recent edition came out earlier this week, when Conaway performed a "SMASHup" of songs from The Blind Eyes. She's also done renditions of songs by Bo and the Locomotive, Ellen the Felon, the Dive Poets and more. In total the series has had eight installments.

Some of the tunes have never been recorded, meaning Conaway only has her memory as a drawing point. Several of the SMASHups that feature Conaway performing live were captured on film by Kat Touschner, who also works as a media arts producer at KDHX.

RFT Music chatted with Conaway on the telephone to get a handle on the origins of this project -- and how it's meant to showcase the vibrancy of St. Louis' music scene. Questions and answers have been edited for clarity.

Jason Rosenbaum: How did this whole thing come about?

Syrhea Conaway: Sort of how it started is kind of like a funny story. I wouldn't say funny, but it's definitely interesting.

I guess about two days before the Cinco De Mayo show [last year], Paige (Brubeck) and Evan (Sult) of Sleepy Kitty texted me and said 'hey can you play our slot for us for Cinco De Mayo? Because Paige hurt her arm and is having a hard time holding a guitar.' And I was like 'oh shit yeah, sure I'll play it.' I start thinking about it and I said "Man, people are going to be really upset if they come to see Sleepy Kitty and then it's going to be me. And they'll be like who the hell is this? I didn't want to come see this." But I thought I could cover one of their songs just to be like "Hey - Sleepy Kitty couldn't make it. You've got me. Sorry." But then I would play one of their songs to appease the crowd for a second.

Then I was like, "Two days ... that's not enough time." But then I thought - I could do anything with my voice so much easier than grabbing a bunch of instruments. So I just put together five of their songs and smashed them altogether. And it turns out that I didn't get to play Cinco De Mayo because they were so behind schedule. This actually worked out perfectly, because I got sick the next day -- and I was even too sick to play for them anyway.

But we had recorded the smash with an iPhone - just a regular iPhone camera, totally low-fi. I made a DVD and gave it to Evan and Paige. And then a couple days later, they blew up my phone at two in the morning. They were like "Oh my God, that's so awesome." And I was like, "Thanks." I didn't think anything of it. And then maybe a couple weeks later I thought, "That was kind of fun, I wish I could do it again."

I picked the next band I really liked watching and that was Union Tree Review. And then I did that one. And then next was Humdrum. I just started doing bands that I'd seen a bunch and like a lot. I guess I sent out a mass e-mail by the third or fourth one. And I was like "Hey I'm doing this thing - any suggestions? Anybody I should check out?" And then I got a whole bunch of feedback.

I kind of regret sending out the e-mail because now I've got like a list of 45 bands in St. Louis. I'm like "Man - there is no way I'm going to do all of this." It's going to take me three years just to complete the list.

Are there some instances where you're smashing up songs that haven't been recorded yet? Or are most of them drawn from prior recordings?

I guess for Sleepy Kitty's case... they hadn't released their album yet. It's just me going off my memory of hearing their songs. But for the most part the last few bands I've done, this is stuff that's been recorded that I could be "Oh I know how this melody goes, but I have no idea what they're saying." So I'll go back and be like "Oh, that's their thing" and use whatever can be used for the song.

Is all the sound coming from your voice on these? Or are there instruments used in some form or fashion?

No, this is all a capella - it's all live a capella. I know it's kind of hard for people to follow that, which I why I was hoping the video would make it clear that I'm recording all the parts live. I'm beatboxing the drumbeat. It's all with the voice.

How challenging is this for you to do? Have there been times when you've had to start over? Or has it all been pretty natural for you?

For the most part the day that I sit down and work on the smash, whatever's the first thing I come up with is usually what I end up using. And I haven't really had too much difficulty trying to figure out how to put something together. I guess the hardest part is trying to find sounds that I can work with. But yeah, I don't know. Whenever we film it, I've already got the song figured out. You know it's not like we're filming it for the first time, we've never done it before just right then.

I don't think I really have too much of a problem with it. If I hear it in my head, I can sing it. ... Singing my show live or doing an all-live a capella show that I've done before is way easier than picking up the instruments and doing the exact same thing. Once I hear it my head, I just sing that note - no problem.

The Blind Eyes stated through social media channels that they were big fans of the SMASHup of the band's songs. What's the reaction from other people?

I guess for the most part I've gotten the same kind of response of like "That was really cool," whether it's on Facebook or whether it was just in-person. I guess the only one I did that I didn't really know the members of was the the Dive Poets. And I knew [Dive Poets keyboardist and RFT Senior Music writer] Christian Schaeffer, but I didn't know anybody else. Shortly after I did that, I went to one of their shows at the Pageant. And they stopped me and said "Hey, that was really cool."

But for the most part I've gotten a pretty good reception. The Blind Eyes are only number eight. Really if I kept up with it as I should be, I'd be on - I don't know - number sixteen by now. I took a little break from like September until pretty much this month. Because you know, it wasn't like I got burned out or anything. I have my own music that I do too and I don't want to wear myself thin of just doing other people's stuff. Which I don't mind doing,

I think it's a lot of fun and I definitely think it opens up horizons for me as far as being outside the box. You kind of get stuck in the same patterns whenever you're playing by yourself. Your only creative force is yourself.

I really think there's really cool stuff going on in St. Louis and the St. Louis music scene. Whether people want to disregard it or not, I don't care. I just kind of want to make this something unique to St. Louis. That's why I don't want to do any other band that doesn't actually live in St. Louis. I want to do only St. Louis bands.

As far as your own original work, anything that's come out recently that you want to mention?

You know, I haven't released an album since like late 2009. I was supposed to release two EPs last year, but I got many distractions. ... It turns out the studio that I was recording it at -- the Panharmonicon - [Gareth Schumacher] and his wife just moved to California. I was like "Man, I've got to find another studio to finish recording it at."

So no, I don't have anything like recent beside the first album from 2009. But I definitely have a whole bunch in the arsenal that I'm burning to get out. I just need to find a time to record it all and get it done.

How frequently can we expect to see new SMASHups?

My plan if I stick to my guns and don't burn the candle at both ends is to do at least two a month consistently. And that may or may not change. The point was to always do two a month. Sometimes life gets in the way and you've got to take time out to do your own thing for a second.

I think the whole reason I also did this acapella was: 1) it's not only easier for me, but 2) people tend to forget that your voice is an instrument. And that's what I'm trying to show everybody that you can do some really cool stuff with your voice than you can with anything else.