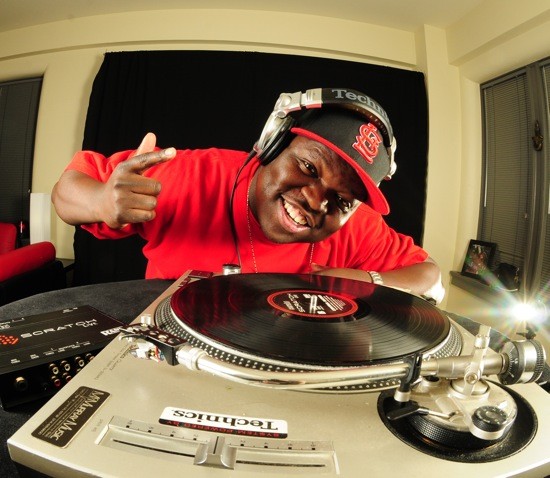 Recently nominated for a 2012 RFT Music Award for Best DJ, long-time St. Louis headliner Sir Thurl will be on the tables this Saturday night at The Ambassador in North County for promoter Jonathan Burns' 'B-Day Bash.' Flying in to perform are Birdman, Mystikal and a "special invited guest." (6 p.m., $35-$45).

Sir Thurl has been a musical force on the local hip-hop and party scene for the better part of two decades. Starting out as a rapper in the group Black Muzick's Funkiest with a friend from grade school, Sir Thurl turned to DJing in a serious way after meeting DJ Kut--Nelly and the St. Lunatics 'flagship' DJ--and began getting bookings every weekend. Known as 'The Official Party Starter,' Sir Thurl has spun for nearly everyone who's come up in the area, including gold-selling artist Murphy Lee, who he still tours with.

Aside from DJing for some of the biggest acts in the game, Sir Thurl is the CEO of Allstar DJ Service, managing a stable of nine local DJs for parties and events. He's on Hot 104.1 as half of the Lou Gotti Boyz--with DJ Cuddy--Saturdays from 7-10 p.m., and hosts STL Playlist Mix, Sundays at 9 p.m. He also DJs at The Loft and the Junkyard Bar & Grill. His Twitter handle is @DJSirThurl.

RFT Music caught up last week with Sir Thurl at his offices in North County, to talk about his career and the changes he's seen in the local scene over the years. Questions and answers have been edited for clarity and length.

Tony D'Souza: Congratulations on being nominated for the RFT award. I've always wondered how you came up with your stage name. Do you have royalty in your family?

Sir Thurl: (Laughing) My cousin was named Thurl and I always looked up to him. When you're young, you don't have your own identity. You kind of grab what's out there.

Nobody has been more active in St. Louis hip-hop than you've been over the past 15+ years. What kind of changes have you seen?

Back in the day, it was harder, there was no email; everything is more accessible today. Right now, music is kind of 'throw away.' You could do a tape back then and it would last a year, but now it only lasts like three months. There was more of a fan base back then, we used to support each other. I see artists who go to shows now, perform and leave. Back in the day, we used to stick around and check each other out.

You saw Nelly blow up, Chingy, Murphy Lee; you were right there for all that. Now some time has passed. What's the St. Louis hip-hop scene like today?

We have some great music; we have to get the business side in order to get things to prosper. The artists have to understand they need a team, that it's a business, that they have to work all the angles. I try to educate artists because I've been through it. The manager, the representation, your visual image, the type of product you put out--you have to have all of it. St. Louis is a big hood. We have a lil small hip-hop scene, and a lil small R&B scene. Mostly we have street rap. It represents the city. It's just that when you get too much of it, not everybody's good.

Do you tell people when they aren't good?

(Laughing) I'm honest. I'm known as the outspoken DJ. I've had a couple artists who've wanted to fight me. You know with opening acts, a lot of people pay for those spots. If the headliner is huge, they can charge $1,000 per act. I'll tell people not to waste their money. They don't listen to me most of the time.

You were at the T.I. show last month. Why did he rap over his own track? Isn't that lazy?

How's the party scene for DJs in the city right now?

It's like a drought. The clubs aren't making money like they did before. DJs are cheap. It used to be that the music you had [in your collection] made you a better DJ, but today with MP3s, anybody can get anything. I try to get all the DJs on the same page as far as charging, but it's a no-win battle. I understand. But when somebody gets a cheap DJ, they can't come close to the talent.

I'm noticing a bottle of champagne. What are you drinking these days?

Murphy Lee released a wine. 'Freaky Muscato.' People are drinking it like crazy! They're selling it at Schnucks!