Brothers Lazaroff's New Record is Out this Weekend: Review and Video 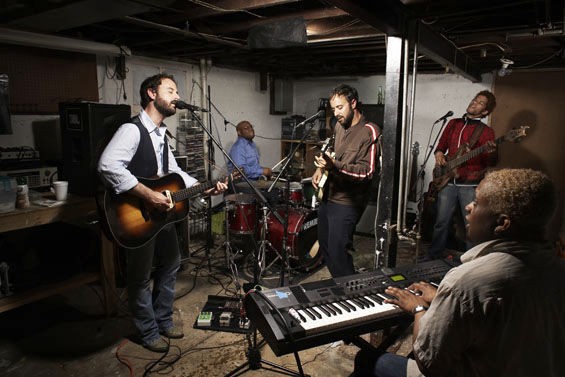 Through fate, musical kinship or blackmail, Jeff and David Lazaroff landed perhaps the most enviable backing band in town for their roots/rock outfit: With Grover Stewart on drums, Teddy Brookins on bass and Mo Egeston on keyboard, the Brothers Lazaroff turned into an amorphous and flexible force, with soul and funk filigrees peeking out from the Lazaroffs' folk- and rock-based songs. 2010's Give 'Em What They Need was the quintet's first recording, and the album never settled in one groove too long. For the just-released Science Won, the band takes an unexpected left turn and reverts back to the acoustic folk that attended the Brothers' earlier releases. Low-key campfire songs are not, perhaps, the most obvious use of players who pretty much live in the pocket. But as consummate sidemen, Stewart, Brookins and Egeston ably fill in the blanks with tasteful piano, sonorous acoustic bass and intuitive percussion. Their restraint on these recordings makes the occasional breaks and flourishes that much sweeter; listen for the rhythm section's bounce on the title track, which melds well with the jazz-flecked guitar solos.

For a rock band the all-acoustic record can bear the mark of introspection like a badge of honor or a scarlet letter: There are no distorted guitars or loud guitars to hide behind, just the lyrics, voices and nimble picking to focus upon. On Science Won, the Lazaroffs move in close and let the gentle quaver of their voices sell the song. (The brothers both shoulder singing and songwriting duties; I'm sure that Mother Lazaroff can tell one from the other, but here their voices share a fraternal timbre and delivery.) Lyrically, the band favors impressionistic character sketches that neither tell complete stories nor deliver big truths or startling revelations, which can be frustrating if you're looking for something to latch onto in lieu of hooks or compelling melodies. At their best, Jeff and David can get existential without going too far-out; "Under the Tree" considers the weight of family pride; conversely, "It's All Relative" casts too wide