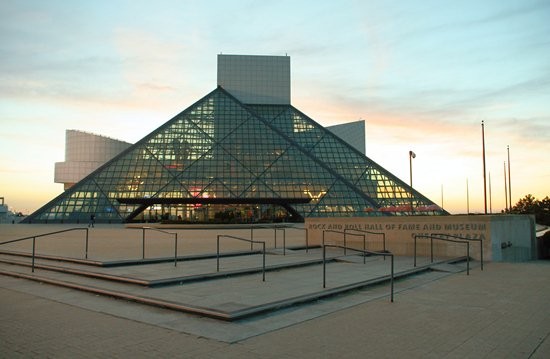 With music being so subjective, it's no surprise that the Rock and Roll Hall of Fame emerged over the years as a colossal punching bag. When people disagree over whether Lou Reed's Metal Machine Music is dreck or a stroke of genius, no decision is going to be universally loved.

The Cleveland institution has received flack for various reasons, from its nebulous voting system to its questionable decision-making (seriously, did Neil Peart spit in Jann Wenner's tea?). And the ceremonies for the venue have sparked some awkward moments with less-than-cohesive bands.

And then there was the time the Sex Pistols sent out a handwritten note refusing its enshrinement, effectively calling the museum a "piss stain." Yeah. That happened.

But for all the criticism the Rock Hall gets, it does make some good decisions every now and then. This year, for instance, the Hall inducted Laura Nyro, the outstanding songwriter who penned some of The 5th Dimension's biggest hits. And more often than not, some better decision making allows for some damn good performances -- and even some surprising reunions.

With an eye on the positive, let's look back at some of the better moments in Rock and Roll Hall of Fame history:

1993: The surviving Doors and Eddie Vedder don't screw up

One of the biggest roadblocks to a good performance is when a marquee member of a band has passed on. Such was the case when the Doors were inducted in 1993, many moons after Jim Morrison died under somewhat mysterious circumstances. While Pearl Jam's Eddie Vedder is not everybody's cup of tea, he did a more-than-serviceable job singing "Light My Fire" with the three surviving members. More importantly, the Hall allowed the band to play the song in its entirety -- not the wussy abridged version that gets spun on the radio.

People should be thankful that the band was inducted in 1993 and not the present day. Otherwise, the group may have come up with some zany scheme to have a hologram version of Morrison expose himself to the world.

Before 2009, Beck had already been inducted into the Hall as a member of The Yardbirds. But the Hall of Fame's grand poobahs decided to let him in as a solo artist as well in 2009, a wise decision considering Beck's immense skill as a guitarist.

Beck got to play a scene-stealing set that included a portion of his best song - "Beck's Bolero." He also got to perform a duet with Led Zepplin legend Jimmy Page, one of Beck's buddies from the Yardbirds. 2011: Leon Russell gets the nod

Russell in recent years finally received some mainstream recognition through his collaboration with Elton John. But since he was a teenager, the Oklahoma native gained plenty of friends within the music industry through his work away from the spotlight. It was fitting that Russell was honored for his toil, being inducted in 2011.

Russell's performance included a rousing contribution from - of all people - John Mayer. The truth is that the crooner is actually a pretty accomplished musician when he's not putting forward pop schlock.

The Police disintegrated at the top of its game, setting Sting free to conquer the adult contemporary world. But the trio managed to patch up any hard feelings to perform at the band's induction ceremony in 2003.

While the band didn't get back together right away, it did reform a few years later to embark on one of the most successful tours in modern history. The Rock Hall may have been the spark that put the ghost back in the machine, so to speak.

2002: Talking Heads tolerate each other for one more night

As we saw this year with Axl Rose's temper tantrum, the Rock and Roll Hall of Fame can cause some already tenuous personal situations within bands to fester. That could have happened with the Talking Heads, a group with members that frankly do not like each other. But the band managed to come to perform a few songs at its 2002 induction ceremony.

Chances of a full-fledged reunion are between slim and none, especially since bassist Tina Weymouth said that singer David Byrne was "a man incapable of returning friendship." But the Hall was clearly alluring enough to get a great band back together, to the delight of serious rock fans around the world. That has to count for something.