Out Every Night: The Best Shows From April 16 to 22 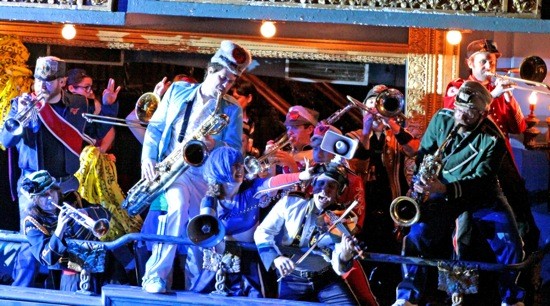 Ok folks, this week is insane -- the number of excellent shows that did not make the cut for this post could easily fill another, if not for the nagging reality that time is finite. We don't want to short-change you though, so here's the runner-up rundown: Crowbar at Fubar on Monday, Cursive at Off Broadway and Comeback Kid at Fubar on Friday, and (deep breath) Birdman & Mystikal (and special guest) at the Ambassador, Kix Brooks at Pop's, Judge Nothing's reunion show at Fubar, Steddy P and DJ Mahf's record release at Cicero's, the Mountain Goats with Water Liars at the Gargoyle and the English Beat at Blueberry Hill. Remember also that this Saturday is international Record Store Day, so many of the area's vinyl purveyors will be having parties with live music as well. Details for these and all of our other showlistings can be found on our recently re-designed concert calendar (oooh, fancy).

Click through to read about the other not-to-be-missed shows of the week, including appearances by Willie Nelson, the Hood Internet, Mucca Pazza and more:

La Dispute Mon., April 16, 7:00pm @ The Firebird - $12 By Ryan Wasoba Grand Rapids' La Dispute might make you nostalgic for the pre-Internet days of punk rock, that era when post-hardcore and emo were indistinguishable and bands made names for themselves through relentless touring rather than relentless digital campaigns. The workhorse quintet's devotion to its craft comes across on its newest album Wildlife, which finds relief from modern anxiety in classic devices like dynamic outbursts and lyrical over-shares. The band headlines its show at the Firebird, but it has been seen on tour with the likes of Thrice, Thursday and Hot Water Music: Bands who, like La Dispute, understand the importance of ground-level promotion. Frontman Jordan Dreyer Sounds Like: That dude from MewithoutYou, a less melodic Omar Rodriguez-Lopez circa At The Drive-In or a less drunk Craig Finn circa Lifter Puller.

Willie Nelson Tue., April 17, 8:00pm @ The Pageant - $45-$65 By Katie Moulton From this 2010 show review: While Willie Nelson may be a counterculture outlaw, he doesn't buck the popular opinion of his loyal fans: He plays the songs they adore and expect to hear. While I was fine that Willie played no tracks from his last album American Classic, a set of jazzy standards that lacked his earthy spark, I was hoping to hear a sample from his upcoming album Country Music, to be released on April 20. But the setlist was pure Willie, with 26 songs and two medleys clocking in at just under 90 minutes, and it deviated little from the set he played last summer on the small stadium tour. Even the way the band tore through three big hits straight out the gate - before setting in on their true rhythm - seems to have become standard. By the time the band switched into "Crazy" - the next breath after "Funny How Time Slips Away" - Willie and the rest seemed warmed up and got steadily looser as the show went on. He began shredding, and his voice, along with his signature guitar tone, rose to the forefront - unique, ageless, wry and wistful in equal parts. Man and instrument often seemed in conversation, as on "Angel Flying Too Close to the Ground," (the first slowed-down moment thirteen songs in), when the lonely guitar filled in the spaces, seeming like it was trying to explain the things its player left unsaid.

Kim Massie Thurs., April 19, 10:00pm @ Beale on Broadway - $7 By Annie Zaleski Although the word "diva" is so overused it's almost a useless descriptor, Kim Massie is one vocalist who deserves the honor. With its brash, gospel-influenced strains of vibrato, Massie's voice can be as big and broad as Aretha Franklin's, but it contains just enough Etta James-ian blues to undercut this strength with sorrow. When Massie sings the standard "At Last," you can close your eyes and imagine her voice as a vocal preacher, laying down the lyrics like audible commandments, just as easily as you can imagine the sound slinking down a smoky stage moonlit by a lonely spotlight. Massie is always -- and effortlessly somehow -- magical, spiritual and glowing.

Red Horse Fri., April 20, 8:00pm @ The Sheldon - $35-$40 By Roy Kasten The term "supergroup" has never been more ridiculous than when applied to singer-songwriters, who, when tiring of the solo acoustic trade, band together for a bit more oomph. Such is the case with Red Horse, a trio featuring Eliza Gilkyson, John Gorka and Lucy Kaplansky. The former remains one of the brightest, if least notorious, songwriters in Austin, while the latter two have been remaking the New England folk scene in their own witty and wise image. If the three veterans haven't influenced every folkie to follow them, it's not for lack of talent or consistency. Listen up, young strummers. You might learn something. What to Expect: Singer-songwriters can tend towards the dour and predictable, but Red Horse never is. The trio's originals pierce with honesty; its stories slay with surprising humor.

Mucca Pazza Fri., April 20, 9:00pm @ The Firebird - $15 By Christian Schaeffer For a certain stripe of one-time high school jock, a Mucca Pazza show must look like a reunion gone awry. For this punk-rock marching band, the band geeks have taken control of the reins. The Chicago-based outfit takes a battery of brass (alongside accordions, guitars and even a Day-Glo pom squad) and weaves in Balkan brass music, '60s surf rock and plenty of pulse-pounding rhythms in its tunes. Mucca Pazza has made a few records, but no amount of high fidelity can compare to the group's all-inclusive live show. So hide your letter jackets: the Big Man on Campus doesn't stand a chance against 30 sets of marching, stomping feet. Where'd He Go To High School: St. Louisan Jeff Thomas helped found the band, though his guitar playing is a little tough to hear over the saxophones and drum lines.

Apop Record Store Day Block Party Sat., April 21, 10:00am @ Apop Records - free By Daniel Hill Local lovers of punk rock/noise/metal/underground music in general have always found Apop Records to be an inviting establishment, and never is its overall hospitality so evident as it is come this time of year ― over a dozen bands will play its annual Record Store Day party, including seven RFT Music Awards nominees. Hardcore head honchos Shaved Women, noisy math-rockers Spelling Bee and drum and bass duo Volcanoes are just some of the day's highlights set to play in the street next to the building. Schlafly and New Belgium will provide the drinks, and the whole thing is free! This celebration of the independent record store happens every year on the third Saturday of April, providing a financial boost to the economically embattled establishments while simultaneously reminding us that physical media will forever trump the too-pervasive tinny low-fi downloads of the day. Don't Leave Empty Handed: Hey, while you're in there, why not buy all those records you were thinking about downloading? Go ahead; your ears will thank you.

The Hood Internet Sat., April 21, 8:00pm @ The Firebird - $12-$15 By Jaime Lees Windy City mash-up wizards the Hood Internet will be in town for a heavily sponsored event. This show is being billed as a party, not a concert and for good reason. The duo specialize in mixing hip-hop and '80s music with modern indie rock ― the resulting sound is a cluster-fuck of ever-changing, highly danceable tunes. The Hood Internet's contemporaries and co-conspirators are up-and-coming Chicago acts Flosstradamus and Kid Sister, so expect clips from these acts featured among samples ranging from Beach House to Drake to the Black Lips to Jamie Foxx to Deerhunter to Gucci Mane to Grizzly Bear. Pregame: Hit the Hood Internet's web site and download the free "mixtapes" to listen to while you're dressing and dancing in front of your mirror.