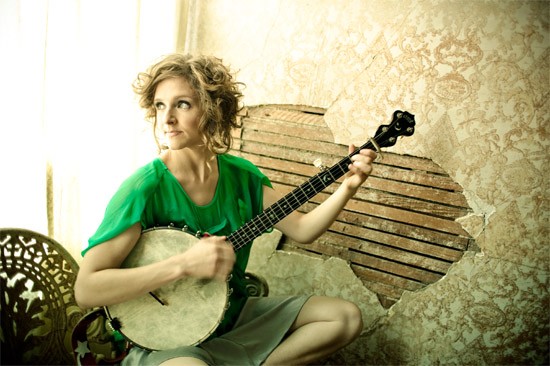 It's safe to say that of all the ambassadors for old-time music -- from Bill Monroe to Pete Seeger to Ralph Stanley -- Abigail Washburn has had, through her passion for and knowledge of China, the most remarkable of international impacts. At one time, the singer, songwriter and instrumentalist had planned to make a home in Beijing, not as a musician, but as a lawyer. But as much as she loved Chinese culture, she seemed to love the banjo even more.

Over the course of an eight-year career she has recorded with Uncle Earl and the Sparrow Quartet (which features her husband Béla Fleck) and made solo albums, including last year's City of Refuge, a Tucker Martine-produced fusion of indie rock and old-time music that manages to capture what's most expressive and electrifying about both forms. And she's returned again and again to China, exploring new ways to remake American folk music, challenging herself and finding new audiences for the old sounds.

Washburn's last appearance in St. Louis was with a full band, opening for the Head and the Heart at the Blueberry Hill Duck Room in 2011. This time, on Thursday evening, she'll be performing as a duo with City of Refuge-collaborator Kai Welch at the Sheldon Ballroom (3648 Washington Boulevard; 314-533-9900).

Roy Kasten: I wanted to ask you about Earl Scruggs, who passed away recently. Do you remember the first time you encountered his music?

Abigail Washburn: I would say it was in college. I was hanging out with a bunch of people who were discovering bluegrass. Of course, you hear Bill Monroe and the Bluegrass Boys. At first I thought it was a bit jarring and strange, somehow representative of a South I didn't know or relate to because I never lived there. But over the years now it's become my music, my home. I live in Nashville, just around the corner from where Earl lived. I got to spend a number of days on his couch hanging out, singing songs, playing banjo tunes. He became a friend to me, for sure, in those last few years.

He was the most influential banjo player in the history of the instrument, but your style is totally different. You play in the pre-Scruggs clawhammer style.

I was inspired to learn banjo by Doc Watson, a contemporary of Earl's. They were coming up at the same time, emerging out of these places like Sugar Hill and Shelby, North Carolina. I was drawn to the old-time sound, whereas a lot of people were drawn to the Flatt and Scruggs sound.

Can you put your finger on what drew you in?

One thing, to provide some context: I was a Chinese major in college. I was obsessed with China. I thought I'd spend the rest of my life there. I was studying for the law exams to go to Beijing Law School. I passed them and was ready to go. After seven years of being a total Sinophile, I heard Doc Watson's "Shady Grove" on an LP at a party. I thought it was totally beautiful. It was reaching out and meeting this subconscious desire to find something really special about America that I could share with my Chinese friends. I was struggling to find that, rather than some big concepts like democracy or human rights, that you're never going to find are simpatico with Chinese people. The sound was magnetizing. I went out and bought a banjo and started learning the old-time music.

Then there's the further exploration. I think old-time music appealed to me because it embraces a more feminine quality. What I mean by that is that it's an all-inclusive craft, a folk craft, a web of people creating a vibe and a trance together. Bluegrass incorporates more ideas of jazz, of showmanship. Here's this chord structure and this number of bars, and I'm going to show you what I can do. Today there's still a gender thing. Most women I know aren't interested in showing off, but in relating, creating community, a sense of connection. I definitely fell into the old-time trance.

What was your first experience translating that music to China?

At first it was just taking my banjo with me to China. There was a place, the CD Café, back when CDs were hip, and I was interning at a government relations firm in Beijing. I had some friends who played harmonica and things like that. I fell into a crowd of ex-pats and newbies to the business world in China and we'd just play songs together. I think that was in 2001. I only knew how to play one Doc Watson song and one Gillian Welch song.

I didn't have big hopes for myself and my music, but before I left for law school in 2003, I went on this road trip through Appalachia, and started learning some more songs. The whole point was to do these things in America that I wouldn't be able to do because I'd be so busy in Beijing being a lawyer. I made this bucket list of things to do. I went to Elkins, West Virginia, to study at the Fiddlers' Convention, I meditated in an ashram, I went to the International Bluegrass Music Association. I was there jamming in a hotel hallway with some girls, and Sugar Hill Records walked up to me and offered a record deal. My trajectory totally shifted. My blood was pumping at such a high rate through my veins, I felt like my whole body was pulsating from this craziness that was happening. I was excited. I was 23 or 24, and I thought, "Why not?" I'd try it for a year and see what happened. And now it's been nine years.

After I made my first record in 2004, I was terribly missing my friends in Beijing. I wanted to visit them, but they said, "You're a musician now, right? Why don't you play some shows?" So they set up some crazy shows in Beijing, shows at the Nashville Bar, places like that. The response was overwhelming. I took some friends with me, they all paid for their plane tickets just because they wanted to go to China. And I had hit on this thing. I was taking a traditional-oriented band, I was singing in Chinese, and we were filling up these bars, wall to wall. It was unbelievable. You know how in life when doors just open and you feel like that's where you're meant to be? That's what it was like for me in China that first time. This last year I completed my twelfth tour of China.

In one of the videos on your website for that tour, you're leaving an airport or somewhere, with instruments piled five, six feet high, strapped on a pick up truck, crossing the Yellow River. What's the biggest challenge of touring in China?

American pop and rock music has penetrated the Far East, but is that the same with old-time music?

No. I would actually say that American pop music hasn't penetrated China. Maybe there are a couple of huge pop stars that have made it into the Chinese general mentality. But in general they are psyched about Asian pop, Sino-pop. That's what you see on TV, the kings and queens of Hong Kong or Taiwan pop. There isn't the same kind of diversity; there aren't fans in the same way, subcultures. It doesn't exist. People just love Sino-pop. Maybe some people are more aware, maybe they went to a bigger university in a big city, so they know more about Western music, and maybe there's some freak who loves country music or old-time music. But that's rare. They aren't even psyched about their own folk music.

That's part of what I hope to see in my lifetime in China, this opening up of consciousness about how music can become part of identity and connection in the world. I think America has allowed people to have those subcultures in an intense, comprehensive way. One of my dreams is to do a folk revival tour in China, have Chinese folk bands involved, and get them in front of large audiences. I know some kids still do grow up and learn a bit of the music on piano and violin, but they get drawn away from it.

Are there any underlying affinities between traditional Chinese folk music and traditional American forms?

Uncomplex harmony is a big piece of a lot of folk music. I can't say that across the board, but in what I've heard of most ethnic Chinese forms of folk music and American folk music, it's simple chord structure behind really powerful grooves. That's not true of Han Chinese traditional folk music. You probably know that there are 56 different ethnicities in China. So, the Uyghurs and the Mongolians and the Tibetans, they have incredibly strong groove-oriented folk music. It's simplistic harmonically, which is perfect for old-time American music. It's trancey, vibey, groovy, in one mode, and it stays there. And if it changes chords it's not a big deal. You can just jam out on it forever.