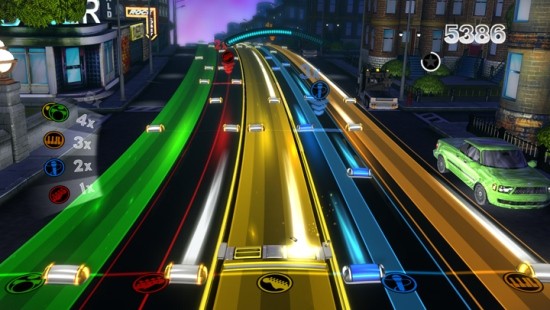 Recent music games have become opulent affairs, pulling out all the artistic stops to capture gamers' attention spans. The Beatles: Rock Band for instance was a beautiful visualization of the legendary group's music, complete with dazzling virtual representations of the Fab Four. And various iterations of the Guitar Hero franchise upped the ante by recruiting uber-popular bands to virtually appear during gameplay.

While grand-scale decision-making made the genre more interesting, it also ended up being something of an albatross. After all, licensing and promoting a game featuring The Beatles' music isn't exactly cheap. And with the economic slowdown prompting decreased consumer demand for pricey instrument peripherals, it wasn't long before the music game genre's hash was supremely mellowed.

The genre didn't used to be so grandiose. Harmonix - the Boston-based company behind the early renditions of Guitar Hero and all of the various Rock Band titles - released Frequency and Amplitude in the early 2000s, titles that prompted players to use regular controllers to match beats. While not as commercially successful as, say, Guitar Hero: Aerosmith, the two games developed a cult-following as the music game genre evolved.

Those two game came to mind last week Harmonix unveiled Rock Band Blitz, a downloadable game coming later this summer for Xbox 360 and Playstation 3. Requiring no instruments, the title is aiming for a more addictive, arcade-like experience than music simulators like Rock Band 3 or Rocksmith. Instead of matching notes on screen with a real guitar or an actual keyboard, gamers have to push buttons on a controller to nab high scores.

It remains to be seen how fun Rock Band Blitz is to play, but the potential is there. For one thing, the lessened complexity makes more difficult songs accessible to casual players. Vocalists, for instance, probably can't get through Megadeth's "Good Mourning/Black Friday" on drums without failing in 10 seconds. With the amount of notes to hit condensed considerably in Rock Band Blitz, that song - as well as other difficult ventures - becomes a bit more of a doable challenge as opposed to an obnoxious frustration.

The game incorporates the Rock Band series' massive library of downloadable songs, providing people with a new method of mastering Weezer's "Say It Ain't So." And since the game won't likely be more than $20, the barrier-to-entry problem caused by expensive equipment won't be as prevalent.

Judging from commenters on the very popular and informative web site RockBandAide, not everyone warmed to Rock Band Blitz's approach. Some were disappointed that the first new Rock Band title since 2010 wasn't a full-band game, while others weren't exactly sure how the gameplay worked. Someeven planned to merely make the purchase in order to export the 25 songs that come with the game onto Rock Band 3.

That type of reaction isn't terribly surprising, especially since hardcore rhythm game enthusiasts have grown accustomed to the full-band experience. But at a time when music games aren't as popular as they used to be, Rock Band Blitz is a low-risk approach that could bring casual fans back to the genre. And if that means a resurgence for full-bad games, all the better.