Megadeth Rocker Elaborates About His Love for Mini-Horse 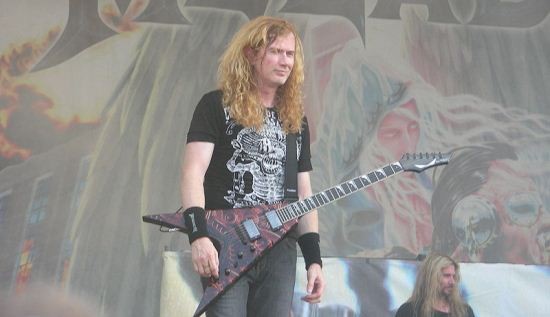 With so many years of rocking under his proverbial belt, Mustaine is entitled to some of the finer things in life. But according to Spin Magazine, one of Mustaine's most-prized possessions isn't a golden record or a platinum toothbrush. No, Mustaine is enamored with a miniature horse he found named Rocky:

We found him living in a parking lot with a bunch of junk cars around him. He had a little soul, and we just felt it when we saw him. We knew that he needed our help, you know? His hair was ruined, he was in really bad shape, he didn't like people. And now he's the friendliest horse -- he'll come running up to you no matter where you're at. We live in kind of a hilly area. The coyotes, they come and lie down by him 'cause they know that he's not a threat.

He was dribbling spit when you guys were doing the photo shoot because my wife was feeding him apples. I was like, "Don't do that!" I know the green skin on the apples is gonna make green spit, and he's gonna look like a rabid horse. We've had him inside the house, but it's usually just for special things, like around Christmastime.

Let's be fair here: There's nothing terribly unusual about metal-heads having curious passions. There's a running motif in Some Kind of Monster -- a documentary about the trials and tribulations of Metallica - showcasing the band members' rather strange hobbies. Drummer Lars Ulrich, for instance, enjoys collecting huge paintings, while lead singer James Hetfield gets his jollies hunting bears in Russia.

But Mustaine's mini-horse is exciting for one reason and one reason only: It conjures up memories of Li'l Sebastian -- the beloved creature on NBC's Parks and Recreation. On the show, Li'l Sebastian is largely responsible for the success of the Pawnee Harvest Festival. And the creature's death touched the Indiana community so much that it inspired the lovely and evocative song "5,000 Candles in the Wind:"

Given the emotional connection people have with these smaller-than-average steeds (Mustaine says that his mini-horse spends most of the day eating grass and breaking fences), it's only a matter of time before Rocky inspires a Megadeth song. That is, as long as the animal is somehow entangled in Middle Eastern warfare or emerges as part of Mustaine's subconscious.

Megadeth, by the way, is scheduled to be in town on May 19 at the Verizon Wireless Amphitheater (14141 Riverport Drive, 314-298-9944). The group is one of the headliners of Pointfest 30. Other scheduled to perform that evening include Rob Zombie, Sevendust, 10 Years, Trapt and Taproot.