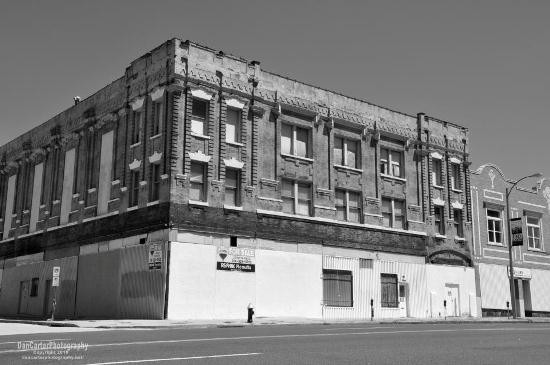 The Castle Ballroom - one of St. Louis' few remaining links its jazzy musical past - is in need of a buyer. And despite some challenges, boosters see potential to rehabilitate the facility to its former glory.

Located at 2839 Olive St., the Castle Ballroom was one of the first dance halls that targeted an African-American audience. The building hosted a number of legendary musical acts such as Miles Davis, Louie Armstrong, Jimmy Forest, Clark Terry, Ernie Wilkins, Duke Ellington and Count Basie.

Landmarks Association of St. Louis wrote about the Castle Ballroom on its web site, explaining the structure's origins and history:

The Castle Ballroom, originally known as Cave Hall, was designed by architect John Paulus, and constructed in 1908. Built for owners Cornelius Ahern and Herman Albers as a replacement for Uhrig's Cave, where they had previously operated a dance academy and hall. Known as the Cave Ballroom, the new facility opened on August 29, 1908, with music provided by the former Uhrig's Cave Orchestra. The venue hosted dances six nights a week, in addition to private balls and masquerades. Beginning in the 1920's the hall became a popular venue for Jazz concerts, and in 1922 changed its name to the Castle Ballroom.

In 1934, the ballroom closed as the neighborhood was underwent a demographic shift. African Americans were becoming a majority in the nearby Mill Creek Valley due in part to racially-based housing restrictions. The venue reopened in 1935 under new ownership, and was managed by famed African American promoter Jesse Johnson.

The building has been for sale for a while now, and is currently listed $399,000 on Re/Max's website. Since the structure is on the National Register of Historic Places, Leigh Maibes - a Re/Max Results agent tasked with selling the property - says that the expense of refurbishment could be defrayed by federal and state historic tax credits.

Noting that it would be "an extensive project" to renovate the building, Maibes says that a potential owner could end up "with something like the Pageant halfway between Downtown and the Central West End right across from SLU and Harris Stowe." But while preservationists have held sold-out tours of the building, Maibes says the structure isn't getting the interest expected of such a historical venue.

"I think as a general public, we haven't reached a broad-enough audience and really understanding what the significance of it is. A lot of articles have just glossed over it. From the preservation community, we've had two sold out tours at 40 people apiece," Maibes says. "We have two sold-out showings in the middle of the winter with no heat or water in that building. And people $12 to $15 apiece just to come see it."

"But that's the preservation community. I don't think the population at large knows anything about it," she adds

Andrew Weil, the executive director of Landmarks Association of St. Louis, says that the Castle Ballroom is structurally sound and could "certainly be rehabilitated." But he adds the building's most attractive feature - the actual ballroom - could limit its appeal.

"The stumbling block, though, is that the most historically significant part of the building is the hall itself," Weil says in a telephone interview. "And as such, a rehab that qualified for those tax credits wouldn't be able to carve out that interior space and, say, make it into individual offices or apartments or something like that. They have to leave that space basically intact. Which means that if you're going to turn it into an office or something like that, it's going to have to be sort of an open plan - or you're going to need to find someone who needs a big auditorium space."

He says one possibility is using the space as the home to a National Blues Museum, an idea being pitched for downtown St. Louis. Not only does the Castle Ballroom have a musical connection seeped in history, he says, but it also could come with a ready-made concert venue.

"I think it would be much more appropriate to put a National Blues Museum in the Castle Ballroom because it has a strong association with music but also a strong association with African-American music," Weil says. "And then also the added benefit is you've got a concert hall ready-made on the top. It's not just a museum; it could kind of be a living museum with a performance venue -- which would obviously be appropriate for a blues museum."

Maibes says time may be of the essence, adding "if we can't get somebody to step in and take this on as a project, we'll lose it."

"I feel like St. Louis is a rich music town, I really do," Maibes says. "And I feel like they're just thinking this is another brick building that's ready to fall down. I feel like the history of what it is isn't well-known. That's what I really feel."

Click here to see a Facebook page with more information about the Castle Ballroom. And click here for the Landmarks Association of St. Louis' profile on the building.