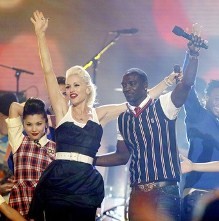 Akon hasn't been perfect throughout his career, but it's hard to accuse him of being selfish. The St. Louis native developed a propensity to share the spotlight with other artists, even if it means his presence isn't always noticed. That cooperative mentality allowed Akon's behind-the-scenes career to flourish - and his bank account to expand.

Such is the case with "The Sweet Escape," a Gwen Stefani track that was the number one song on Billboard's European Hot 100 on this day in 2007. The song eventually ended up at number two on Billboard's Hot 100, behind - coincidentally - Akon's "It Don't Matter."

That's a pretty nice commercial performance for the title track of Stefani's second solo album. But there's a little back story behind the collaboration: Akon almost didn't get his chance to work with Stefani.

Bigwigs at Interscope Records cajoled Stefani to collaborate with Akon, especially after his album Trouble was a commercial smash. Ever the studious producer, Akon spent an ample amount of time studying Stefani's body of work - from her early days with No Doubt to her bourgeoning solo career.

Stefani though was gun-shy, telling The Sun in 2007 that she "didn't want to go through the pain of trying to work with someone I didn't know:"

"That was scary but it worked as he is so talented and amazing. But trying to get me to work with Akon took more time."

"But then I decided I would go and within five minutes of being in his company, I felt like I'd known him for years. This track was totally left of centre and totally unexpected. We wrote it within ten minutes. I'd totally work with him again and now we're going on tour together."

Rather than being a prototypical hip-hop track, "The Sweet Escape" is a brassy do-wop number with an old school feel. It's a departure of sorts from the frenetic pop of Stefani's other solo work, such as "What You Waiting For?"

The song even served the utilitarian purpose of being a marketing tool for Stefani's L.A.M.B. fashion line, which is sold at upper-echelon stores around the world.

Akon would go onto guest star on a number of other hit songs. He's worked with everyone from T-Pain and David Guetta to Dr. Dre and The Lonely Island. This break-neck schedule often landed Akon on Forbes' Celebrity 100, a chart showcasing the earning power of famous people. Worth noting is that an Akon protégé of sorts - Lady Gaga - was number one on that list in 2011.

Here's the video for "The Sweet Escape" in honor of the song's anniversary on top of the European charts: