Out Every Night: The Best Shows From March 26 to April 1 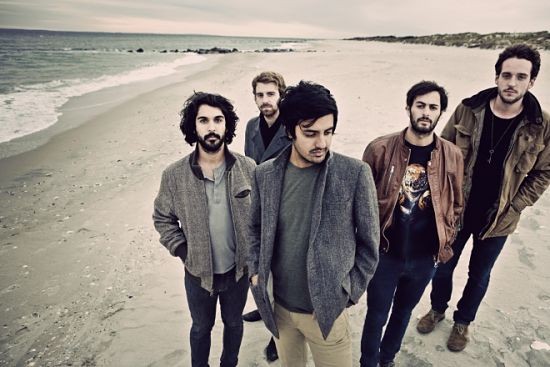 Still tired from last week? Too bad, March is unrelenting. Time to down some coffee, eat some energy bars and pack in the protein (might we recommend some pink slime?) because this week is jam-packed with shows as well. On Friday, two guys named Pete who happen to be legends in their respective fields of music will play (separately) -- Peter Frampton will play his entire live double disc Frampton Comes Alive at Peabody Opera House, while hip hop super-DJ Pete Rock will spin records as part of Lola's "Speakerboxx" series. I almost made a "Pete and Pete are coming to town" joke, but then realized that could potentially result in serious confusion and draw the righteous wrath of nerds throughout town. Never fear though, nerds, as Tuesday's Harry and the Potters show is definitely for you. Young the Giant's sold out show is this Thursday at the Pageant, if you don't have those tickets just go to the Pageant on Friday or Saturday and catch the Yonder Mountain String Band instead, you won't regret it. Local punk band Pillow Talk will be releasing a demo at their Saturday CBGB show and on Sunday Lemmon's will play host to a cancer benefit show stacked to the brim with local talent and sponsors. More after the break:

Cody Canada & the Departed Mon., March 26, 8:00pm @ Old Rock House - $20 By Jason Rosenbaum From this 2012 interview: ​Cody Canada throughout the 1990s and 2000s was the leader of Cross Canadian Ragweed, a hybrid of country sensibilities and rock influence. The group experienced a great deal of critical and commercial success in the country music world before disbanding near the end of the decade. Cody Canada & The Departed rose out of his old group's ashes, allowing the Oklahoma native to go in directions that he says used to be impassable. The band - which also features former Cross Canadian Ragweed bassist Jeremy Plato - is opening for Shooter Jennings on March 26 at the Old Rock House (1200 S 7th Blvd, 314-588-0505). In addition to Canada and Plato, the Departed includes Seth James on guitars and vocals, Medicine Show keyboardist Steve Littleton and drummer Dave Bowen.

Harry and the Potters Tue., March 27, 6:00pm @ The Firebird - $13-15 By Daniel Hill Harry and the Potters invented the genre "wizard-rock" in an hour on June 22, 2002. In the face of a shows's cancellation on account of the absence of all the bands, promoters / brothers Joe and Paul DeGeorge formed a Harry Potter-themed band and wrote seven songs -- in an hour. As all things Harry Potter tend to be, it was a hit. Soon the brothers were taking the act on the road, playing mostly libraries and the like and writing more music, though six of those orignal seven songs all made it to record. Nowadays the quirky group has a drummer and an EP club with several releases, and fans across the globe. Considering the group's inauspicious start, one wonders if a certain amount of otherworldly alchemy took place along the line -- or maybe its just that even Harry Potter nerds feel the need to rock sometimes, too.

Cassie Morgan & Adam Hajari (solo sets) Wed., March 28, 7:30pm @ Plush - free By Christian Schaeffer From this 2010 album review: Two local singer-songwriters, Cassie Morgan and Beth Bombara, are solo artists in their own right, but the women have developed a close musical and personal relationship which has led to fruitful collaborations. Under the mantle Cassie Morgan & the Lonely Pine, Bombara adds harmony vocals and miscellaneous instrumentation to Morgan's languorous, blues-flecked folk songs. This project's first full-length, Weathered Hands, Weary Eyes, will be released this week. Weathered amplifies the folk overtones of Morgan's earlier release; her acoustic guitar strums are simple, and Bombara's close harmonies and percussive flourishes keep the mood breezy but never lightweight. For now, Cassie Morgan & the Lonely Pine proudly remains a two-woman operation, though the musicians haven't closed the door to augmenting their sound.

Ruthie Foster Thu., March 29, 7:00pm @ Old Rock House - $20-23 By Roy Kasten "You can't find it in a shout," Ruthie Foster wails on the fiery 2009 single "Truth!" Like the whole of her Grammy-nominated album The Truth According to Ruthie Foster, the performance has plenty of shouts and twists in a packed-to-the-rafters church, or maybe it's a juke joint full of the faithful who still have plenty of sinning to do. The Brazos Valley, Texas-born artist has spent a life singing her way inside the tradition of Sister Rosetta Tharpe and Aretha Franklin. It shows. Her body of work is deeply anchored in stone-cold gospel, soul and earn-it-to-burn-it singing. Why you should go: Koko Taylor has passed on and the upcoming St. Louis date for Bonnie Raitt is sold out, so Foster (with touring mate Paul Thorn) is more than the next best thing. She's the real thing.

New Edition with SWV Thu., March 29, 8:00pm @ Scottrade Center - $32-67 By Josh Levi ​Serving as both propellants of New Jack Swing and fore-bearers of the boy band movement of the late '90s, New Edition's lasting footprint has rippled through popular culture since its beginning in 1978. Coinciding with the Foxy 95.5 FM's Birthday Celebration, the group's reunion tour finds all six members on one stage in St. Louis. Including the presence of the incomparable Bobby Brown, New Edition is sure to cause a frenzy amongst the grown and sexy as the evening highlights hits from the respective careers of its members. Add the seductive bump and grind of openers SWV and the night is sure to make you "weak at the knees." Worth It: This may be your only chance to see "Poison," "My Prerogative," and "Candy Girl" in the same setlist.

Young the Giant Thu., March 29, 8:00pm @ The Pageant - $15-18 By Kelsey Whipple Despite coming together in 2004, the members of Young the Giant didn't hit the radio or the mainstream until roughly last year. Known for years as the Jakes, the guys survived a name and personnel change before its 2011 debut drew crowds and earned the group a raucous live reputation as the little-band-that-could-jam. But good hype comes to those who wait: Named a band to watch by too many outlets to name-drop, the California quintet and its mid-tempo, croon-heavy modern rock have earned approval from even the most curmudgeonly of sources: Morrissey is a fan. Recommended If You Like: Earnestness. Live, the tambourine features heavily, and the band's track "Cough Syrup" has already made it to Glee.

Peter Frampton Fri., March 30, 8:00pm @ Peabody Opera House - $30-90 By Dan Moore From this 2011 blog post: Classic rock fans, recently empty-nested mothers, and talkbox enthusiasts take note: Peter Frampton is going to play the iconic Frampton Comes Alive! in its entirety in St. Louis, part of a 35th Anniversary tour that will see the 1970s rocker play his classic live double-album in its entirety. The show is on March 30th at the Peabody Opera House (14th St. and Market Street, 314-241-1888) Ed: Peter Frampton contacted RFT Music to clarify that he did not, in fact, overdub Frampton Comes Alive! Please see our interview with him for a full explanation.

Pete Rock Fri., March 30, 10:00pm @ Lola - $10-15 By Daniel Hill Pete Rock is a living legend of hip-hop ― often mentioned alongside J Dilla, the RZA and DJ Premier as a pioneer of the '90s East Coast sound. Rock also played a substantial part in incorporating elements of jazz into hip-hop, especially earlier in his career when he would add horn samples to accentuate his beats ― in this way, Rock can also list A Tribe Called Quest, The Roots and Gang Starr as peers. He's worked with Marley Marl, Wu-Tang Clan, Kanye West, Nas, Public Enemy....get the picture?? Legend. Rock even contends that the production credit for Notorious B.I.G.'s super-hit "Juicy" should technically go to him; the funny thing is he's not too worried about it. Considering his confirmed credentials, its easy for one to understand his position. Another Pete Rock Remix: As part of Lola's "Speakerboxx" series, Rock will be behind the turntables grinding away at what made him famous: DJing the party from 10 p.m. until 2:30 in the morning. Bring your dancin' shoes.

​Yonder Mountain String Band Fri., March 30 & Sat., March 31, 6:30pm @ The Pageant - $22.50adv / $25dos By Roy Kasten From this 2010 blog post: Once upon a time, a string band meant hillbilly music as advanced by Roy Acuff, Charlie Poole and John Hartford. But the Grateful Dead and outdoor-festival culture changed all that. The Colorado-based acoustic rockers of Yonder Mountain String Band have long known who now calls the tune: snowboard bums, collegiate bro-grassers and summer-fest freaks. That demographic has transformed it into the quasi-string band equivalent of the Dave Matthews Band, a massively successful touring operation that cranks out live recordings faster than even its own instrumental breaks. But like DMB, YMSB is fueled by musicianship and a groove channeled into warp-speed bluegrass -- and the band has enough of a connection to country roots that even skeptics may want to ring in the new year with a hyper-driven hippie twirl.

Pillow Talk Demo Release Sat., March 31, 10:00pm @ CBGB - free By Joseph Hess Nine months have passed since Glass Teeth tore a hole through St. Louis music, only to bow out the same night as its CD release show. Drummer Mike Hansen and venerable front-man Jeff Robtoy have since moved on to more aggressive pastures in Pillow Talk. Hansen's break-beats and Robtoy's aggressive banter draw clear parallels to their former band, but Pillow Talk features a metallic Albini-style guitar tone which differentiates the band from its predecessor. Comparisons aside, Pillow Talk offers vibrant psychedelic rock riffs with a vicious punk rock delivery. Don't Go Home Empty Handed: Pillow Talk is set to release its first recorded demo this evening, so don't leave without a shiny copy of your very own.

Lemmon's Cancer Benefit Show Sun., April 1, 6:00pm @ Lemmons - $5 By Daniel Hill A benefit show intended to raise money for the American Cancer Society, this show is jam-packed with bands and sponsors. There'll be music from several local bands: Black for a Second, Winchester, Guy Morgan, Popular Mechanics, Chill Dawgs and THORLOCK, and the event is sponsored by PBR, St Louis Sinner and Throwing Things Records. Raffles from Cheap Trx, Tap Room, Hammerstone's, Friendly's, Mokabe's, The Silver Ballroom, Lemmons, Mangia, Beauty Bar Hair Salon and Mud House will take place -- come out, have a good time and maybe win some prizes. Only 5 bucks and all for a good cause!