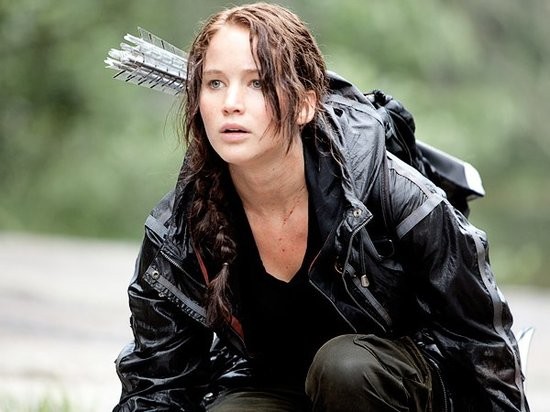 It's fitting that a film about a dystopian free-for-all would include music from the Arcade Fire. This is the group, after all, that composed several songs on Funeral about a world overrun by snow and power outages.

But the song that appears in the movie is not from Funeral. It's an original song composed for the Hunger Games soundtrack. which comes out today and is a grab bag of nearly every kind of music imaginable. The soundtrack includes the uber-popular offerings of Taylor Swift, the understated majesty of the Civil Wars and, yes, the Arcade Fire. It's one of the first new offerings from the Canadian outfit since the band shocked the world by winning the Album of the Year Grammy in 2011.

Throw in indisputably popular acts such as Maroon 5, Kid Cudi and Miranda Lambert, and the record is everything to everyone.

There's an obvious inclination to compare the Hunger Games soundtrack to Twilight's - and with good reason. And it's not because both films are based off fantastically popular books. The first Twilight movie soundtrack picked songs from nearly every genre of music, from the braggadocios arena rock of Muse to the folksy goodness of Iron & Wine. And lo and behold, the formula was wildly successful from a commercial standpoint. After all, Nordstrom Rack isn't selling Neon Bible in the check out aisle. Twilight on the other hand...

The arrangement worked pretty well for the musicians involved. Paramore and Muse were already successful before Twilight, but the movie almost certainly helped put both bands onto another level. It'll be worth watching if some of the less mainstream artists on the Hunger Games soundtrack - such as The Low Anthem or Punch Brothers - become more known to casual music fans.

While only Adele could come up with an album with enough commercial muscle to rival The Bodyguard soundtrack, Hunger Games is showing signs of such heft.

Swift's "Safe and Sound" - a collaboration with The Civil Wars - has become a hit before the album's release. The song made headlines when went to number one on the iTunes charts hours after its release. And it's safe bet that the album will chart well.

And for a movie that's as big as The Hunger Games, it's not surprising there's a St. Louis connection. The album's producer - the award-clutching maestro T-Bone Burnett - was born in the Gateway City.

The Hunger Games: Songs From District 12 and Beyond