The End of SXSW 2012: Too Much Portland to Count and a Little St. Louis

2:15 p.m. By mid-afternoon the South Congress strip had become a not-quite-debauched Mardi Gras parade of young and old, hip and unhip, crunchy and coiffed, and dogs, lots of dogs, all taking in the food trucks, boutiques, vintage apparel encampments and day parties, lots of day parties. They never end. The Friday slate for the back lot at Home Slice Pizza was packed with folk and pop acts, including fine Aussie band Husky, mashing up mope and fun with good blasts from the keybs for the crowd, who, like much of Austin this time of year, resembled a Portlandia casting call, buzzed on pale ale and basil-dusted slices.

2:40 p.m. Just down the street on Congress stands the poshly-zen Hotel San Jose, home to parking-lot party South By San Jose, with Dry the River wanking hard towards a full freak out on violin and Crazy Horse guitars. An intimidating warm up for the next band, Milo Greene, who recently joined the Civil Wars on tour. A sensible match: though the band suffers from a lack of identifiable songs and personality, it does have a sneaky sampler for the corny violin parts.

3:24 p.m. Back to Home Slice for Typhoon, an excessively-named Portland band (yeah, I saw a few of those this week) with twin violins sounding not corny at all. I dug the slap-back delay on Kyle Morton's voice, the twin drumming and the trumpet player who couldn't fit on stage. Nostalgia for the early years of Margot and the Nuclear So and So's set in.

3:55 p.m. Buzz band Hospitality got off to an inhospitable start, pushed back 15 minutes by an impromptu song or two by Adam Arcuragi, because clearly there wasn't enough music on the dual stages (cleverly separated by curtains and removable doors; while one band played, another set up in secret beside it). I expected more than just a few hooks and "dah dah dahs" (tally at SXSW 2012 approximately 3200). The band looked fried and ready to go back to Brooklyn. 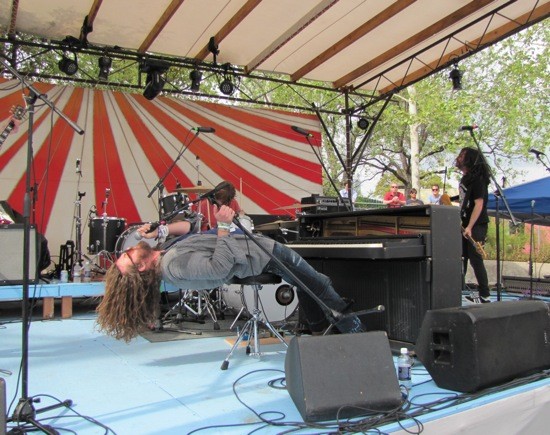 4:10 p.m. "It made me want to puke," Dylan once said of the word energy as applied to his reunion tour with the Band. Twenty-eight years later, he still has a point, so let's make a pact to strike it from our impoverished musical lexicon. J Roddy Walston and the Business doesn't have energy. The band has testicular fortitude, rock & roll in the glands, from Leon Russell to the MC5 to Little Richard, whose "Lucille" Walston pillages in the most unholy of ways. At least that's how it sounded on the South By San Jose stage on Friday afternoon. I would call it the most electrifying set of the week if I hadn't seen Springsteen the night before.

6:20 p.m. Back at Home Slice, Dan Mangan was finishing up a quick set with "Leaves, Trees, Forest" and "Post-War Blues," both of which evoked M. Ward with blaring trumpet and sweaty, angry strumming over a sharp band. You can't hear it all, so my Friday day parties ended all too abruptly.

8:20 p.m. If you've ever been to South By you know the deal. Young band scores a showcase, travels from Minneapolis or Los Angeles or St. Louis, gets to the gig, and the only critic in town who knows they exist arrives twenty minutes late, only to discover the PA is shit and the sound man is clueless. Such was the fate of sparkling Philadelphia guitar-pop quintet Young Statues, whose artful, cliché-free songs deserved better, while still somehow managing to zip around the room. Clubs in St. Louis: Give these guys a chance if they're routing through.

9:06 p.m. By SXSW standards, Friday night on 6th Street felt relatively tame, or at least navigable, and so I made it to the Parish in time to catch the KCRW showcase with Brighton UK soul singer Alice Russell, backed by San Francisco jazz-funk fusion band Quantic. Russell can belt with the bravado of Candi Staton, but tonight she let the cool, almost Cuban son groove ripple around her, with mysterious violin lines everywhere, and Russell's winning wit and charm overcoming the non-stop chatter of the chattiest club in town. "Look Around the Corner," the forthcoming single from this collaboration, was dazzling.

9:52 p.m. Non-Shocker Cancellation of the Week Award goes to the Ting Tings, narrowly beating out John Mayer, both of whom canceled headlining sets at Stubb's for SXSW. Mayer had a throat injury and the Ting Tings had a hang nail or maybe it was too hot out. Just speculating but the no-show meant opening Icelandic band Of Monsters and Men won a longer set, sounding like an angrier Mumford and Sons, and thoroughly enjoyable from the cheap seats, though the band has one too many songs about sleeping. Then followed Delta Spirit playing their 16th show (literally, I believe) of the week, spraying everything they had left in their tank of frenetic, back-to-Replacements-basics songs at a crowd that really wanted to see fun. You can always tell when a band is trying too hard, and Delta Spirit tried as hard as they could to catch fire, and they nearly did on a terrific "Bushwick Blues."

11:36 p.m. The recorded work of Shearwater is admirable and expressive, including this year's Animal Joy, but at the Sub Pop showcase on the Red 7 patio it mostly sounded like a good band to check your Twitter feed to, if you're following Fake Marcel Proust and Opera St. Louis.

12:17 a.m. Freelance photographer Dana Plonka (SXSW slideshow here) was desperate to hear the buzzy Chairlift at Empire Automotive, so what the hell. If there's a thing that's not my thing it's dreamy electronic dance pop with finger cymbals clinked by an asexual singer in a borderline chador. It's too late for cool points: I did not feel the rapture and I did not groove out on the laser-light show.

1:12 a.m. Feeling a bit like a wimp for ending my night early on Thursday, I pushed on into hour twelve of music for the day with Cloud Nothings at barely east-side warehouse-styled club ND. If the next time you see me you ask, "How was South By?" and I lean in and say, "What?" you can blame this Cleveland band and an arena-cranked PA. Fucking loud enough and a fucking-hard mosh pit, but I went in anyway, getting sprayed with beer and soda and pretty much loving every gnarly thrashed, crashed and spazzed-out hook. Great punk band. Great end to the penultimate night.

Noon-5:30 p.m. I spent the first part of my last day at SXSW 2012 at the second KDHX (88.1 FM) and Twangfest party of the week at Jovita's. For the sake of brevity (right, 47 periodic sentences too late for that) and for the sake of my conflict of emotional interest (I'm a KDHX DJ, KDHX Web Editor and Twangfest volunteer), I'll just graze the highlights: 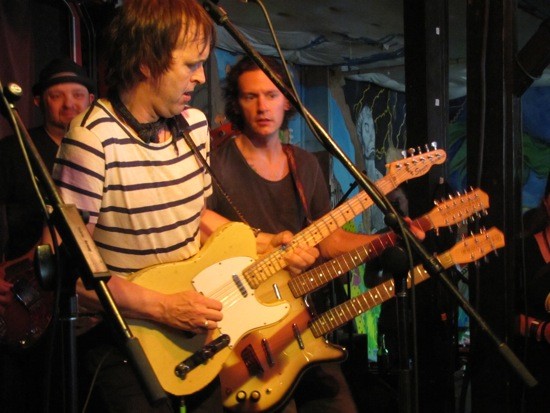 Deano and the Purvs, featuring members of the Waco Bros and the disbanded Meat Purveyors, kicked things off with old-school hillbilly rock and good songwriting delivered by torch-and-sass singer Jo Walston. Rising young songwriter Joe Pug held a solid audience on the outdoor stage (often a challenge at these parties) while Chuck Prophet and the Mission Express ripped through the most-packed crowd I've ever seen inside this Mexican restaurant -- a great teaser of a set for his upcoming show at Off Broadway on March 22. Kentucky Knife Fight won over new fans with a loud and tight performance outside, as did fellow St. Louisians Jump Starts and the Blind Eyes, though the latter played to a small crowd, but so it goes at the end of a long day. JC Brooks & the Uptown Sound smoked through a short run of old-school soul and might have rivaled Prophet as best band of the afternoon, were it not for Nikka Costa, whose shit-kicking, hard pop and funk, with perfectly-timed floor-tom pounding and trombone riffing, made for a sexy, joyous show, and a coup for a by-all-accounts successful event. 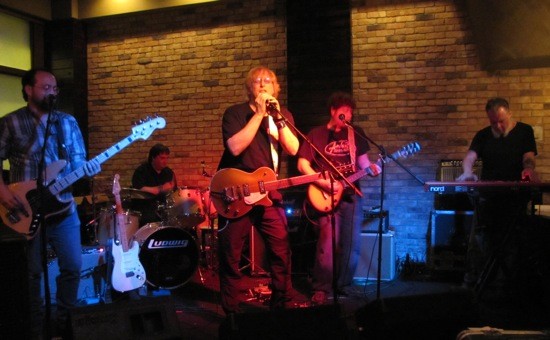 8:16 p.m. Memphis power-pop legends the Scruffs surprised me with a show at tenOak, as I didn't even know Stephen Burns and company were in town. I had high hopes for this rare chance to see the band, but as excellent a record maker as Burns can be (2010's Conquest remains one of my favorite albums from that year), he's a shaky performer and his terrific melodies and garage limbo rhythms never fully translated.

9:10 p.m. I made the trek down to the relatively newly-revived Rainey Street district of bungalows-turned-into-charming-bars-and-eateries via pedicab steered by a young John Belushi doppelgänger, impervious to chafing in his St. Paddy's Day kilt. On the back decks of the Clive Bar, the 43rd drink of the week was in hand and all seemed well. But the catch tonight was the band, the unfortunately named Greylag, who sounded both grey and lagging (glib but true). This is what happens when you plod through Oregonian chamber folk with a falsetto that would make Justin Vernon swear off octaves forever. Subtract any remaining points for the hippy Sumo hairdo. 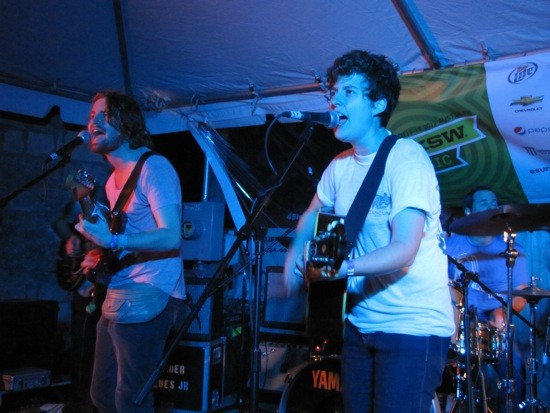 10:01 p.m. I'd come to the Clive Bar for Los Angeles band the Belle Brigade, whose excellent self-titled album from 2011 only approximates what siblings Barbara and Ethan Gruska can do live. With a good little rock band around them, they jolted the crowd with straight-up rockabilly and Everly-esque harmonies, and songs about not caring about being winners and finding true freedom instead. I'm not exaggerating with the Everlys reference and I'm not hyping when I say they were as exciting and pop-smart on stage as any band of the week.

11:10 p.m. I lasted all of three songs for Widowspeak at the aforementioned chattiest club at SXSW. Think Best Coast on Brooklyn art rock and morphine, which would probably work just fine on headphones over a muted David Lynch flick. On stage, nothing was happening, so I fled to catch some of Belfast's Cashier No. 9 at the crap-sounding Sixth Street joint Friends. The band was ending its set, but I liked what it was doing with the apparently world-historical influence of Bon Iver. Extra points for not pandering to the green-beer contingent.

11:46 p.m. I wouldn't expect a Portland indie pop band like Radiation City to pay homage to Etta James, but that it did, led by the mighty pipes of Elisabeth Ellison, who set her organ aside and killed the song, poor sound and all.

12:35 a.m. Earmarking another Portland band Y La Bamba to close out my SXSW dance card might seem like an odd choice, but I've fully fallen for its Steve Berlin-produced, never-too-twee take on Calexico-esque ranchera pop. I'm also smitten by singer Luz Elena Mendoza's prolific dancing and equally prolific body art. On stage at Maggie Mae's Gibson Room, with technoid bass from the bar below shaking the floor, the band all seemed to be serious musicians who yet have great fun renovating traditions and veering from predictions, even when one of them had the terrible idea to run a Fender Squier bass direct and even when the sound person seemed to want to end their career before it truly starts.

And yet I won't forget what Y La Bamba hoped to do and what it did -- make a joyful noise -- with the little time it was given.