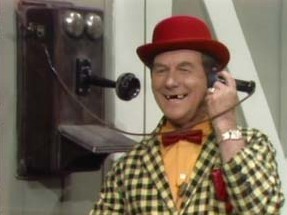 From Spinal Tap to The Lonely Island, nearly every type of music has an act with purposeful comedic overtones. Country music is the elder statesman of this trend, as evidenced by a Missouri native that blended a down-home sound with a big dose of humor.

Gilbert "Speck" Rhodes made a name for himself bringing a comedic presence to the Porter Wagoner Show, one of the more popular country music programs in recent history. Rhodes died of cancer on this day in 2000.

Rhodes was born in 1915 in West Plains, a small town near the Arkansas border. Several members of this Howell County family had a musical streak, as Perry "Dusty" Rhodes and Ethmer "Slim" Rhodes went on to have show business careers. (For a point of clarity, Dusty Rhodes was not related to this Dusty Rhodes.)

In the 1930s, the three siblings toured the RKO vaudeville circuit together as the Log Cabin Mountaineers. The brothers had different talents: Dusty Rhodes became something of a fiddle virtuoso, while Slim Rhodes emerged a popular guitarist and vocals.

Speck Rhodes was certainly musical in his own right, as he became proficient playing the bass fiddle and the banjo. As they grew older, the brothers were part of a group called Slim Rhodes and His Mothers' Best Mountaineers.

All the while, Gilbert Rhodes spent some time cultivating a comedic alter ego. Before long, the character became a fixture on Wagoner's popular television show. And while Wagoner himself was from West Plains, the two men had never work with each other until the 1960s. In addition to performing stand-up comedy on the television, Rhodes also played in Wagoner's band. Wagoner's show cultivated the careers of other mega-famous country artists, most notably Dolly Parton and Willie Nelson. And Wagoner himself cemented his own legacy as one of the more popular country music stars of all time, topping off his career with an induction in the Country Music Hall of Fame.

In many ways the "Speck" character was a polite country bumpkin, which admittedly was not the most original comedic decision. He was often adorned in a plaid suit, a bowler hat and blacked-out teeth. And he had a long-running routine where he had humorous telephone conversations with a girlfriend named Sadie:

But Rhodes' musical streak came through between the guffaws, as seen in this very special rendition of "Hound Dog." Eat your heart out, Elvis.

Besides Wagoner and Rhodes, West Plains was at some point the home of Dick Van Dyke, Jan Howard and several members of the band Ha Ha Tonka.