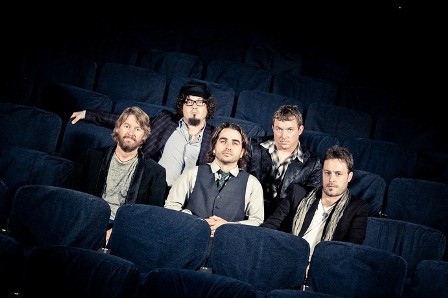 Cody Canada throughout the 1990s and 2000s was the leader of Cross Canadian Ragweed, a hybrid of country sensibilities and rock influence. The group experienced a great deal of critical and commercial success in the country music world before disbanding near the end of the decade.

Cody Canada & The Departed rose out of his old group's ashes, allowing the Oklahoma native to go in directions that he says used to be impassable. The band - which also features former Cross Canadian Ragweed bassist Jeremy Plato - is opening for Shooter Jennings on March 26 at the Old Rock House (1200 S 7th Blvd, 314-588-0505).

RFT Music talked with Canada by phone earlier this month, discussing with him his influences, the formation of the new group and what's ahead for his new endeavor. Questions and answers have been edited for clarity and length.

Jason Rosenbaum: What sort of memories do you have playing in St. Louis? And what does it mean to play here with your new band?

Cody Canada: St. Louis has always been musical to me because of Chuck Berry. I know that probably comes up a lot. He was my Elvis. I was a guitar guy before I was anything else. So Chuck Berry was it for me, and I always knew where he was from.

For one thing, [St. Louis is] real close to Oklahoma where we started, as well as Illinois and Nebraska. And that neck of the woods has always been good for anybody with this brand of music. It's really right there in the middle. Not to sound cocky, but we know we're at least going to at least get a good handful of people who come out and listen, you know?

I'll admit I always enjoy talking to people from Oklahoma, mainly because my grandmother grew up in Ponca City. How did coming of age in that state influence your music?

Cody Canada: I know it's so very confusing for so many people. I see everybody's confusion. I had a guy the other day who've I known forever ask me 'how long have you lived in Alaska?' I'm from Yukon, I was raised in Yukon, Oklahoma. Canadian County and the Canadian River is just a coincidence. My last name's Canada. For the whole thing, there was a Cross in the band, there was a Canada and there was a Ragsdale. And we always called [Randy Ragsdale] Ragweed, Randy Ragweed. That's where that was.

As for the influence of Oklahoma, man I didn't know that it was in my backyard. I was 15, I guess, when I started sneaking into bars and playing for tips. ... I went to a concert in Stillwater, Oklahoma ... and I never went home. I was kicked out of high school anyway and I went over there to see this concert and I met these people that were living for each other. They were writing music together, living at the same house. If they had a gig, all those people would come out. That person would play their songs, and other people's songs.

It was just a good way of life. It was very organic, it was very loving. And people took of each other. Every Sunday at a place called The Farm ... fans would bring food and we would have pot luck. We would sit around and play songs and we'd get to eat a good meal for once that week.

Tell me a little about what went into this new band, as well as the thinking being This Indian Land.

Cody Canada: When it comes to the original stuff, we didn't want to push it. We didn't want to force it. Because Jeremy over on bass, he was with me in Ragweed for the duration and for all of it. When we saw Ragweed falling apart and when we knew there was really no saving it, we decided that we needed to get on top of this. And we needed to get a band together before Ragweed's last gig so we could pop right back out and say 'OK that was the last gig of Ragweed. Next week is the first gig of The Departed.' And we knew the people to call, obviously. We've known these guys since we were kids.

We didn't want to have our last gig in October and then rush a bunch of new songs. Because we've been a part of rushing a record before, and once that album comes out there's always pieces that you wish you had done different. ... We're all in our early or mid-30s now. We've learned our lessons with that stuff. And I wanted it to be thought out, and looked over with a magnifying glass.

The first album was a tribute to the Oklahoma songwriters. And this is a record had been kicked around for eight or nine years with Ragweed. But they were inter-arguments. Not bad arguments, but still a disagreement over what tunes would be or wouldn't be on it. So that kind of shelved it for a few years. And then there was the record label saying they wanted original stuff. [And we said] 'we've given you eight original albums - let us pay tribute to our heroes for at least one record.' And we kind of realized we wouldn't get the love we needed. So we shelved it.

And once Ragweed split, Jeremy and I thought this was the perfect opportunity. We can put this record out for a year. And by the time that year is up, we're ready for that first original album to come out - and we've been living on the road together as a band. So we thought it would buy us some time to put out a good, well-thought-out original record. That's where we're at right now - we're just waiting to get into the studio. So This is Indian Land is full of covers of Oklahoma artists?

Cody Canada: All those people I was telling you I grew up with that I met, it's all those guys. There's only one song one there that can really be counted as original. And that's because [Departed keyboardist] Steve Littleton plays keys. He was one of the first people I met up in Stillwater when I was 15 or 16. He was in a band called Medicine Show. And it was one of their old songs. But Medicine Show is one of the bands that influenced Jeremy and me.

These are all songs written by other people. Because we had a few tunes and we knew we could have done it. But it was going to be rushed.

When you come out to St. Louis later this month, should fans expect a set heavy with songs from This is Indian Land? Or could they expect some original songs as well?

What do you think is the biggest difference between The Departed and Cross Canadian Ragweed?

And now, Seth had fifteen years of his own career, just like me and Jeremy did. And now it's Steve's words, Seth's words and our different backgrounds in music coming together. The reason that I said I don't want to sound shitty is that Ragweed was kind of a windows-down, full-throttle, haul ass. With this, we sit and think about it. And we doctor it. And we have parts and changes instead of just four-chord country rock or whatever you want to call it or whatever they call it these days. It's more mature. It's thought-out.

I think in the past, some of the Ragweed tunes were predictable. And a lot of these tunes are very unpredictable.

When can fans expect an album of original songs?

Cody Canada: The next album is going to be 100 percent original. And we're aiming for fall right now. Right now, we're so busy trying to get the band's name known out there. Now what we do is go out for a couple weeks and come home to record what we can. Get back out there and play some more shows and practice during sound check. Get back in and record those new tunes we practiced in sound check.

It's one of those things that where you get down it just good enough to where you feel confident enough to bring out live for the first time, you know?