Radiohead at the Scottrade Center, 3/9/12: Review, Photos and Setlist 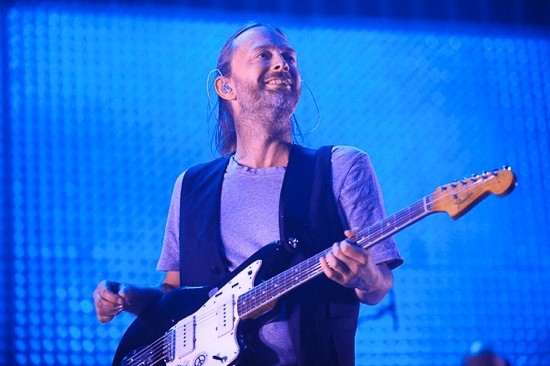 On Feburay 13, 2011, there was nothing much to say about Radiohead. On February 18 there was a new album, The King of Limbs, propelled into the world by its creators with little more than a shrug. There were no interviews, no tour dates, no word from the band beyond the bullet points. Instead there was a black-and-white video released on the same day; it featuredThom Yorke dancing. It was all we had to contextualize the music. And after Friday's performance in front of a sold-out Scottrade Center, it's clear that video contained everything that needed to be said.

Other Lives, whose sweeping prairie songs mesmerized the crowd at the Gramophone in February, is no stranger to big crowds made up of fans of other bands. Its resume includes opening stints for Bon Iver, the Decembrists and the National. None of that compares with acting as entrance music in arenas for Radiohead.

The space in its songs left time to clearly hear the click of a stick on a snare rum bounce hard off the club-level floor, to hear Jesse Tabish's sustained voice echo out to the lines of people stacked at every bag check and ticket scanner. Other Lives had fans, mostly among the GA crowd at the stage, and left with more -- give the Oklahoma five-piece a jones for blips and bloops and get 'em agitated, and you'd land comfortably in the neighborhood of mid-period Radiohead.

The opener was deferential (how else to respond?), playing a half-hour set and keeping the banter perfunctory. Tabish editorialized only once, to call Radiohead the greatest band in the world.

At 8:30 p.m., that band stepped onstage to a roar that only got louder by the end of the night -- no cheap trick for a show with this much anticipation. The Scottrade Center is a damn big venue, and this band had people scrambling for tickets from November to the day of the show, when several hundred seats - many of them quite good -- opened up through the official channels. Radiohead and its attendant machine is proactive about staying a step or two ahead of scalpers; putting a few hundred tickets on the market hours before the doors open can't have been great for hucksters.

Still, people who paid more than face value surely felt they got their money's worth. They might have felt that way at the revelation of the mere visuals -- giant LCD panels repositioning throughout the night; bright, floor-to-ceiling columns as a backdrop layered with a wall of lights shown through concave tiles; a marquee of screens high above the stage projecting images of the band, colored to match the distinct visual treatment of each song.

Radiohead is in fine form. Its members seem free, somehow, of whatever fueled the paranoia of the several albums centered around Kid A. And, more impressively, of the expectation leveled on them as one of the most obsessively chronicled and scrutinized bands in existence. To wit, new song "Identikit," seven performances and zero official recordings into its existence, had been sufficiently documented and consumed online that people were singing along by the hundreds.

Feedback that deafening is impossible to shrug off instinctively. Yet by all indications, that is exactly what Thom Yorke, Jonny and Colin Greenwood, Ed O'Brien, Phil Selway and additional guest drummer Clive Deamer (on loan from Portishead) are doing. What few justifications for their actions they have offered in the past year in interviews and elsewhere amount to, "Why not?" That was the prevalent demeanor on Friday as well.

Thom Yorke set the standard for nonchalance, cracking off little streams of late-night consciousness between songs and dancing, limbs akimbo, with so much abandon that it is the thing mentioned most frequently in coverage of this tour.

The King of Limbs material, heavily represented on the setlist, made a lot more sense after seeing it performed. Its even keel is no accident. Many dismissed the album as relatively shapeless, but there is complexity and heft to be found. It helps, of course, that cranking the songs to jet-engine volume and projecting them from a riveting stage and band makes it easier to hear and appreciate all the little shuffles and layers of manipulation.

With apologies to "Reckoner," "Idioteque" and "Identikit" (!!), "Myxomatosis" is your unlikely most badass cut of the evening, its hulking melody tumbling down from the rafters, Yorke commanding its lurches like the unlikely arena rock god he has become.

For all its swagger, Radiohead is riff-averse these days, straying no further into the back catalogue than OK Computer, despite the ample supply of rock & roll to be found before that. Incredibly, it wasn't missed.

Notes and setlist are on the next page.

Personal Bias: It's easy to mistake Radiohead the band for its peculiar place in the conversation about The Industry. Radiohead is that band Pitchfork earned its reputation applauding, that band that put out a tip jar for an album and that band that's a handy analogy in a thousand other talking points. I will not make that mistake again for a long time.

Random Detail: Thom Yorke's wardrobe of choice for this tour (and it appears to be consistent) is a vest and t-shirt. Plus he's got a ponytail. Do you know many people in the world of his stature can pull off a vest and ponytail? Exactly one: The badass who fronts Radiohead.

Overheard: Not much over the loudest-cheering crowd I have ever heard in my life.

Setlist: Radiohead at the Scottrade Center