Grammar Heroes: Four Artists Who Know Their Its From It's 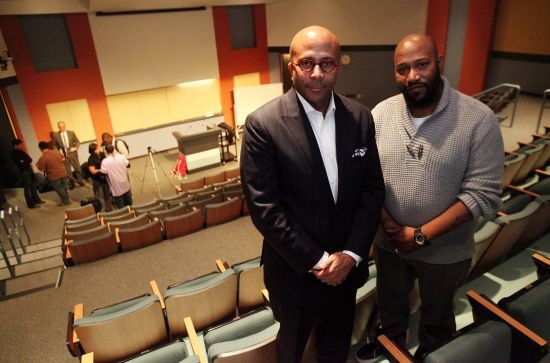 We're exhausted after a long week of running around town, correcting greengrocers' apostrophes in honor of National Grammar Day, which was March 4. (Punctuation over punctuality, we always say!) It's easy to blame technology for society's lazy spelling, but music is also complicit in this pandemic: From clunkers such as the Steve Miller Band's cringe-inducing but rather innocuous rhyming of "Texas" with "facts is" to, well, pretty much Papa Roach's entire catalog, music has committed some grievous syntax sins, but it also has some noteworthy moments of redemption.

(Confidential to Rihanna: Though the lyrics to your song "S.O.S. (Rescue Me)" appear to be "Y.O.U. are making this hard," it sounds like you're singing "Y.O.U.R. making this hard," further muddling the difference between "you're" and "your." You're not helping. If it's not too much trouble, could you consider changing your song? Thanks a ton.)

Grammar Hero: Van Halen's "Right Now" video Van Halen's 1992 video features pretty much impeccable grammar, and lots of it. The vignettes are both silly and solemn: "Right now, a tired man with a wounded heart is sitting in a coach seat on an eastbound transatlantic flight looking out the window wondering how to say 'dog,' 'howl,' and 'moon' in French just in case it comes up." Chills, right? (Of course, Beavis and Butt-head poked fun at this track while the pair watched David Lee Roth's video for "Just a Gigolo": "Right now, David Lee Roth is trying to convince some chick he used to be the lead singer for Van Halen.")

Grammar Hero: Enya Enya figured out a way to avoid any messy grammar gaffes: She invented loxian, her own language. After all, she can't break the rules if there aren't any rules to break. In loxian's Wikipedia entry, English professor Terence Dolan says about the language, "It seems to choose elements at random. It brings in a whole wealth of different language forms such a Anglo-Saxon, Hindi, Welsh and, I think, Siberian Yupik as well.... It seems to have no form of grammar or word order which has very limited comprehensibility." Plus, when Enya gets all rip-roaring drunk backstage -- as she almost certainly does, ahem, Kings of Leon -- nobody can tell if she's fumbling the lyrics or not.

Grammar Hero: INXS Yeah, yeah, we know. Lyrics on cue cards -- Dylan did it first. (And, yes, one of them says "aktivate.") But between the delicious bedhead and seductive eye contact and spot-on spelling, well, collect your prize, INXS.

Grammar Hero: Prince EA In his quick, two-minute paean to hitting the books rather than hitting the streets, local hip-hopper Prince EA engages in some lyrical acrobatics in "Backwards Rappers." (Although it technically should be titled "Backward Rappers," because "backwards" shouldn't be used as an adjective. But, hey, artistic license and all that.) About halfway through the song, Ea trades the backward hat for a mortarboard, and his lyrics reverse course onscreen, now extolling the virtues of education. "I make 'smart' cool," his T-shirt says. Oh, if only there were more than one of him.