Raekwon Showed up at the Gargoyle at 10:55, Ten Minutes After Wash. U. Faculty Pulled the Plug on His Show

Last night, the Wu-Tang Clan's legendary Raekwon the Chef was scheduled to play Washington University's on-campus music venue, the Gargoyle, alongside Indiana rapper Freddie Gibbs. The small club filled out nicely by 9 p.m., and a packed room waited anxiously to see some of hip-hop's best artists do what they do in an unusually intimate setting. Two hours and one local act later, neither artist was in the building, and faculty at the college pulled the plug on the show, sending everyone home with refunds -- much to the chagrin of Raekwon, who arrived shortly thereafter following an eighteen hour drive from the rugged lands of Shaolin New York, only to be told the show was cancelled. We tracked down his tour bus near the venue, where we found a very disappointed rapper. "Bullshit, bullshit. I mean, you know, yeah, you just let 'em know man -- we came," he said. "We came and we feel bad, you know what I mean, that they didn't get the chance to see a great show."

A timeline of the night's events, as well as the rest of our conversation with Raekwon from the bus are below. 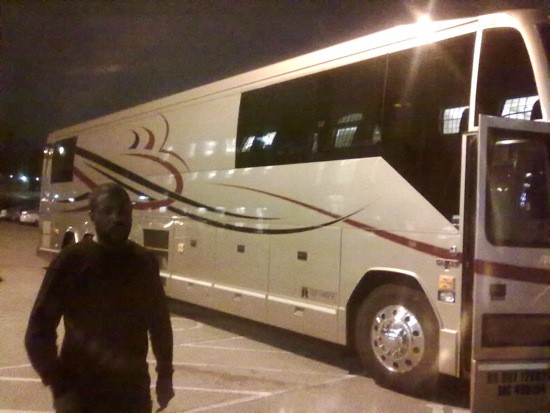 Daniel Hill: So what's your take on this whole situation?

Raekwon: Shit's crazy, shit got me pissed off, man. Damn, man, we was excited, we came straight in -- like, straight in. We knew that we didn't have no time to really go to the hotel.

How long was the drive?

To get in and get right on, it's like, you know....this is what we do, though but....this is fucked up, I don't like situations like this when people come out and they can't....you know, they could have been a little bit understanding of the fact that where we're coming from -- it ain't like it's a three-hour drive. You know in situations like that, you gotta have some kind of sympathy for the drivers and the distance that we traveling, you know what I mean? Its like, come on man, give us a little break. though. It could have been a little later show though. Eleven o'clock we was here; it would have been alright.

Get the fuck out of here.

At 10:45 they turned the lights on, gave everybody their money back and they were out the door. I was talking to the promoter when your manager called and said you guys were here.

Bullshit, bullshit. I mean you know, yeah, you just let 'em know man -- we came. We came and we feel bad, you know what I mean, that they didn't get the chance to see a great show. You know I was coming, we was coming to do what we do.

If it was anything like that show at the Firebird, damn.

Show at the Firebird, right?

Didn't even have a chance. Damn, and I was ready to go, too. Wow.

On the next page: A full timeline of the night's events. 8:15 - We arrived just before showtime, which was slated to be 8:30, and were surprised to see a sparsely populated room -- 50 or so college students were scattered throughout a spot that could probably hold at least 200. Granted, the night is still young. A student DJ is playing songs off of a laptop; the playlist would read very similarly to one of Ego Trip's lists of hip-hop singles, starting from like 1993 on. Not the deepest cuts in the world, but the young crowd seems to be enjoying it.

8:45 - There doesn't seem to be anything going on. More people are filing in, but there is no activity onstage. When questioned, one of the students near the soundboard just informed us that Freddie Gibbs cancelled his whole tour via Facebook yesterday -- major disappointment. Raekwon is now going to go on at 9:30; a local opener named Jabari Kiongozi will start the night off shortly.

9:00 - Thanks to futuristic cellphone technology, I have more information on Gibbs. According to a post on his Facebook page timestamped only 30 hours after the cancellation notification, many of his dates are back on...not St. Louis though. [Update 3/8, 3:20 AM: And now the initial cancellation post is gone. Interesting.]

9:10 - Jabari Kiongozi takes the stage, dressed in a tuxedo. J.K. for short, the young rapper ably worked his way through a decent if unfocused set -- it is hard to pin down exactly what his personal style is. While clearly capable on the mic, Kiongozi semi-schizophrenically jumped from R&B stylings on one song to look-how-many-sylables-I-can-fit-in-there wordplay on the next, while the music stayed danceable and generally upbeat. Then on some tracks he dropped his voice low and slow, but unfortunately the sound in the room rendered his vocals inaudible from where I was standing in these cases. Still, the artist was met with the approval of the crowd, especially when suddenly breaking into an impressive impromptu freestyle. After a brief but effective twenty minutes, he left the stage.

9:43 - Standing outside, I just met the promoter, Andrew Nathan, as he got off his cell phone. He says Raekwon is not here yet, but on the way. OK, more waiting -- I sure wish this wasn't a dry venue.

10:10 - Maybe its the aforementioned lack of booze causing me to get cranky, but the scene here is starting to be awfully reminiscent of a high school lock-in. Students are seated indian-style on the floor in the hallways; inside the club kids are dancing to Jay-Z's "Hard Knock Life", Snoop Dogg's "What's My Name" and other comparably obscure tracks. I'd suggest deeper crate-digging for this DJ if only anyone had crates of anything anymore, instead of the lame laptops. Whatever, clearly the kids here are still into it; I'm probably just old.

10:30 - Students are trickling out. Another student involved in the show just told me that it is most likely cancelled, as Raekwon still hasn't arrived.

10:45 - They just turned on the house lights and instructed everyone to trade their wristbands back in for a full refund. People are disappointed to say the least; I met one fan that drove two hours to get here. Daaaaamnnnn.

10:55 - The majority of people formerly in attendance have left the building. I was just talking to the promoter to get the details on what happened -- apparently he had been in contact with Raekwon's people all night and had been told a few different arrival times, which had all already come and gone. Faculty was ready to pull the plug on the show, but the students who were working it were pleading with them to wait just a little longer, pointing out that hip-hop shows often run or start late and touring musicians aren't always the most punctual, especially when traveling from quite a distance. As we were talking, he got a phone call from Raekwon's manager -- they're here now, they just heard the show was cancelled, and they are pissed.

At this point I left the show, got in my car and started driving around the campus looking for the tour bus. After I found it, Raekwon and his people granted an interview on the condition that I take a picture of the bus as proof that they showed up.