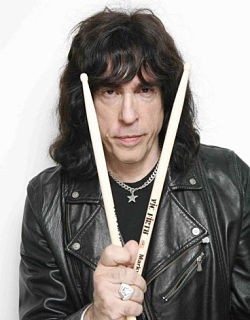 Surely it could not have been easy being one of the lesser Ramones, but never let it be said that Marky Ramone, who assumed the drum kit after Tommy dropped out, was content to rest on the laurels of secondhand rock stardom. Even as the band stopped touring and its founding members slipped off this mortal coil, Marky was making plans for his second act, as he revealed to Tom Scharpling, host of The Best Show on WFMU radio out of Jersey City. (The radio station, by the way, that, via deejay Irwin Chusid, introduced the world to the unique musical stylings of the St. Louis-born chanteuse, Lucia Pamela.)

"It's not your mutha's romance novel," he says proudly. "There's nuthin' too dirty or too graphic, but it's kinda titillatin'."

Marky, it turned out, had been a romance fan for quite some time, ever since the band's last tour in 1995. Bored one afternoon before a show in Pittsburgh, Marky wandered into a used bookstore and, as he was browsing the comic books, one particular volume caught his eye.

It turned out to be The Kingdom of Dreams by Judith McNaught. Marky was fascinated, and then deeply moved, by the story of the Duke of Claymore and the chick, named Jennifer, and the deep and abiding love between them. The book, he tells Scharpling, was like an addiction. He began seeking out other historical romances.

"History was kinda like one of the only subjects I kinda liked when I was in school," he explains, "and sex, too, which I always liked a lot, too, and still do."

If you, like Scharpling, think this sounds "yucky" ("I hate that word," says Scharpling, "but it's the best word I can think of"), have no fear. Lady Wainsworth's Desires is guaranteed to improve your eroticicity.

Oh, and if you, like Scharpling, think you detect a similarity between Marcus, the buff stableboy, with his long black hair, black leather jacket, canvas shoes and jeans, er, breeches torn at the knee and a certain someone else -- well, you're wrong! Lady Wainsworth's Desires is a work of fiction! Clem Burke, the drummer for Blondie, may have stooped to that level in his romance novel, Art of Glass, but he's no Marky Ramone!

* In case you couldn't tell, based on Marky's announcement that he and his staff of 37 are planning some grand architectural projects made from drum sticks, this whole interview is a fake. Or a piece of performance art, if you will. Which is actually kind of sad because if Lady Wainsworth's Desires existed, we would read it, if only to see the phrase "heaving bosoms" used at last. It's far better than Marky's actual new project: Marky Ramone's Pasta Sauce.