A Radiohead Preview: Possible Setlists, New Songs and Lessons from Past Shows 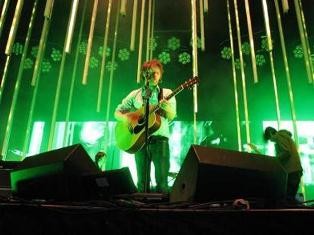 When Radiohead comes to town, it's a big deal. And for good reason: The Oxford super-group only plays in St. Louis every four or five years, meaning there's pent-up demand for one of the most popular live acts around.

Still, Friday's sold-out show at the Scottrade Center (1401 Clark Avenue, 314-241-1888) is different than the past two Radiohead concerts in St. Louis. In 2003 and 2008, Radiohead played what is now the Verizon Wireless Amphitheater in Maryland Heights. Those shows had a more summery, festival-like feel than what will likely transpire at what's usually a hockey stadium. In other words, don't count on Thom Yorke dedicating "There There" to "for all the people on the lawn that we can't see."

While Radiohead shows are relatively unpredictable, this tour's early offerings have had some commonalities. Here's a quick guide on Radiohead's recent tour, which could provide some hints to what's coming on Friday:

Radiohead's first show in Miami featured two completely new songs - "Identikit" and "Cut a Hole." "Identikit" has been performed at pretty much all of the band's shows on the present tour, so it's a fairly safe bet that it'll get played in St. Louis.

Whether the new material amounts to a new Radiohead album or EP remains to be seen. But it's assuredly evidence that the band isn't finished making music in the slightest after the King of Limbs.

Speaking of the King of Limbs, expect a hefty dose on Friday of the band's most recent album. For better or for worse, the band decided to incorporate nearly all of the songs from the 2011 album into their recent concerts. From the Miami New Times:

While not extraordinarily prolific, Yorke and company has a lot of material. And some fans we spoke with weren't entirely satisfied, two of whom felt that Radiohead's 2008 performance in West Palm Beach featured a stronger selection of the bands back catalog.

Nevertheless, the audience was more than patient through seven of eight King of Limbs songs. The only KOL fan favorite: "Lotus Flower," which got a distinctly louder response than anything else from the record, as did Thom Yorke's signature prancing.

It should also be noted that Radiohead has incorporated some recent tracks that weren't released on King of Limbs - such as "These Are My Twisted Words" and "The Daily Mail" - into the band's set lists.

Radiohead's extensive array of B-sides is somewhat of a hit or miss affair, but it does contain some gems. St. Louisans would be profoundly lucky if the band breaks out "Polyethylene," one of Radiohead's most heralded hidden songs. Jackknifed Juggernaut 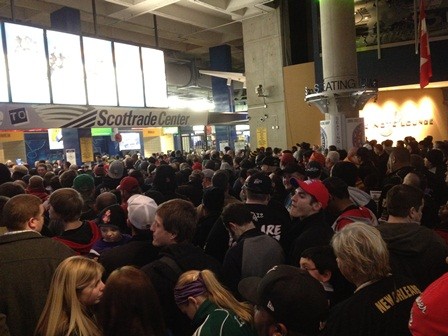 One of the benefits of a Verizon Wireless Amphitheater is that it has lots and lots and lots of parking. That isn't the case with a major concert situated downtown, although it is not necessarily impossible to find a parking spot around the arena.

In addition to a smattering of parking garages relatively close to the arena, there is a fairly spacious parking lot around Union Station. That's the lot this writer used when attending the Royal Rumble, an event that attracted quite a few people. Of course, a sold out concert might a good opportunity to carpool or even consider the Metrolink.

On the plus side, there are plenty of opportunities for post-show festivities. After all, it's a lot easier to get to" the city's celebrated watering holes when the show isn't all the way out in Maryland Heights.

It's a somewhat good assumption that Friday's concert probably won't resemble 2003, where the band played a set consisting of songs from The Bends, OK Computer, Kid A and Hail to the Thief. It may not even find common ground with the band's 2008 show, which was in support of the accessible In Rainbows.

But while the Miami New Times wrote that Radiohead's recent shows tend to include a lot of material released after Kid A, the band is (thankfully) notorious for not producing repeat set lists. For every obscure track, there are well-loved favorites such as "Paranoid Android," "Karma Police" and "Everything in Its Right Place."

Chris Gray of the Houston Press perhaps put it best:

There was probably very little Saturday to contradict once-ardent fans of the band's beloved guitar-heavy albums The Bends and OK Computer who think, to borrow an expression from Radiohead's home country, that they have been up their own arse for a while.

But there were moments where Radiohead's esoteric, challenging music also made great arena-rock theater - who knew Kid A's frenetic electronica track "Idioteque" would make such an excellent clapalong?

So for the lucky many who were able to grab a ticket, enjoy Friday. If the past two St. Louis are any indication, one of the best bands in the world is set to blow this city's collective mind.