Casino Queen Kicks Off Battle of the Bands Competition 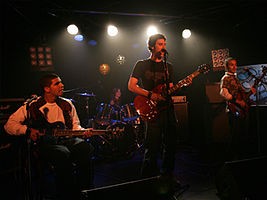 Is there anything more ubiquitous in musical culture than a battle of the bands competition? In addition to being a plot device of myriad entertainment vehicles, these fights for melodic supremacy are a prime incentive for up-and-coming bands to hone their craft.

Of course, these competitions don't just happen in a vacuum. They occur in real life -- including at one of the St. Louis area's many casinos.

Casino Queen is currently holding its "SEVENS Showcase," a battle of the bands-type competition where a victorious group can win $10,000 and a performance contract. The shindig kicked off last Thursday at the East St. Louis casino.

"Several talented, local bands and musicians have performed at SEVENS, so it seemed natural for us to host a competition to find the next great band," said Jeff Watson, general manager of the Casino Queen, in a statement. "SEVENS Showcase will be a great opportunity for local bands to gain some exposure while giving their fans the chance to show their support."

The rules are relatively simple. Each Thursday night, three bands will perform a one-hour set. Patrons can vote either at a kiosk located on the casino floor or on the Casino Queen's Facebook page.

The first round lasts from March 1 to April 19. Nine bands will move on to the semifinals, which stretch from April 26 to May 10. The finale will be held on May 17.

Laura Kochan, the president of La*De*Da Entertainment & Events, said in a telephone interview that performers will be compensated even for the first round. Bands that move on to the semifinals, she says, get more.

Kochan says she is looking for "bands that will obviously entertain an adult audience," because people need to be at least 21 years old to the enter the casino. She adds that each night of the contest will feature groups from different genres, including country, funk and hip-hop acts.

"I'm trying to schedule it so it's a real entertaining night of good entertainment," Kochan says. "So if you're coming to see a certain type of band, you'll like all the bands."

This Thursday is "pop and rock" night. The lineup includes RIO, Charmed & Dangerous and Mr. Wizard, according to a posting on the casino's Facebook page.

Any band interested in getting involved in the competition should contact Kochan at [email protected]. And more information can be found at the Casino Queen's web site.