The Music of True/False Film Festival: A Conversation with Music Director Amanda Rainey 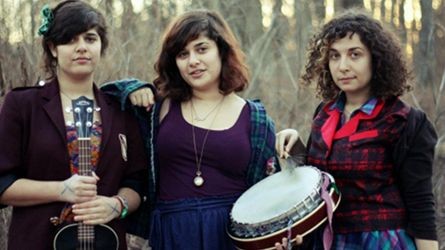 As its title suggests, The True/False Film Festival is focused around a cavalcade of non-fiction motion pictures. In its ninth year, the scope of the festival has widened to feature prevalent artists in independent music such as Dark Dark Dark and Bramble. Based out of Columbia, True/False has become a prominent player in the festival scene, selling more than 30,000 tickets alone in 2011.

True/False is no stranger to live music, as busking musicians have accompanied the festival since its inception. Films dominate the day-time, and live music lights up the night life. Cafe Berlin, Mojo's and The East Side Tavern are all home to dynamic showcases in conjunction with the festival's line up.

If you want to catch the films you'll have to make a trek to Columbia, but St. Louis natives can catch a taste of the festival's sounds right here at home. Traveling French group Les Trois Coups made its way to Plush yesterday, and Pearl and the Beard performed at the Gramophone the same night. Foam, located at the corner of Cherokee and Jefferson, is housing a special post-festival performance with Bramble.

Amanda Rainey, known for her work with Special Passenger Records, serves as the True/False Music Director. Rainey spoke with us about the festival's connections to St. Louis and the festival's merging of film and live music.

Joseph Hess: How did you get started as the music director for True/False?

Amanda Rainey: Last year I volunteered and ran a couple of the concerts. This year both of the music directors left, so I caught one of the jobs. It's been amazing. I was really fortunate that I was able to take the position. I moved back to Columbia for grad school but it didn't work out. The festival does really great things, and I had a flexible schedule, so I went for it.

How has your first year as music director been?

The booking was pretty easy. We had a lot of requests for people to play and not enough spots. We had to turn people down, it was kind of hard. And also, around this time of the year, everyone wants to know the musician schedule. We don't really send the busker schedule. We have to explain to people that outside of the showcases the films are the focus and the music is a surprise.

How were this year's True/False Film Festival's performers chosen?

We started by asking bands back who had played in previous years. We have sixteen returning buskers, and bands who love to play the festival usually call back. We look for bands who can busk, who can just play anywhere. These bands are playing to people who come to see a film. The focus is to be friendly and make friends and not be a diva. This is definitely a community effort. There are a few performers from St. Louis; Ra Cailum, Jay Fay, Dubb Nubb and Cassie Morgan. Out of the performing artists, which do you personally anticipate the most?

I'm really excited to see Dark Dark Dark from Minneapolis play. There's an eight person band with a horn section called Why Are We Building Such A Big Ship? They're from New Orleans but share a accordion player with Dark Dark Dark. It'll be great just having a big group of friends coming to hang out and play. Also, I think it's our first time bringing in an international band. Festival Director Paul Sturtz stumbled upon a band playing on the street while he was in France. He asked them to come play and it actually worked out! The band is Les Trois Coups and they have never been to American before. They'll also be performing in St. Louis before the festival at Plush (Wednesday, February 29). Nick Jaina from Portland, Oregon has spent the last month working on a ballet score and he's bringing a band. I'm really excited to see all of the bands that I have never seen live before.

Are there any special events that might not be featured on the official schedule?

The closing for the festival is called Busker's Last Stand. This happens after the closing film on Sunday night and we get four bands to stand around the lobby of the Missouri Theater. One group stands on the stairs, one on the balcony and two in the lobby. They [the bands] switch off playing songs. In the past they've ended up in the lobby together and people have been encouraged to sing along. It's pretty intense and amazing. What are your goals with the merging of live concerts into this annual festival?

The main goal is that the films and the music will always be merged. We love how the films are integrated with the musicians playing before the film. We do have music showcases at night and we focus on the music then. Also, we encourage bands to come and play on the street. So if you're just in Columbia, walking around, odds are that you'll hear music.

It takes a passionate music lover to work and organize events such as these, tell us a little about yourself, and why you do what you do!

I do a small record label, Special Passenger Records, and I put together one or two compilations every year. The compilations are usually done with a theme, and that theme brings everyone together who works on the project. I just love live music more than anything. I don't really spend a lot of time on music blogs, or downloading new albums off Pitchfork or anything. I just like going to shows and experiencing new music. It's great that this is a festival where 30 bands will play at your small town in Missouri, it's just amazing.

Pearl and the Beard with lace, Bo and The Locomotive Wednesday, Feburary 29 | 9:00 PM | The Gramophone

For a complete list of participating musicians, please visit http://truefalse.org/program/music. 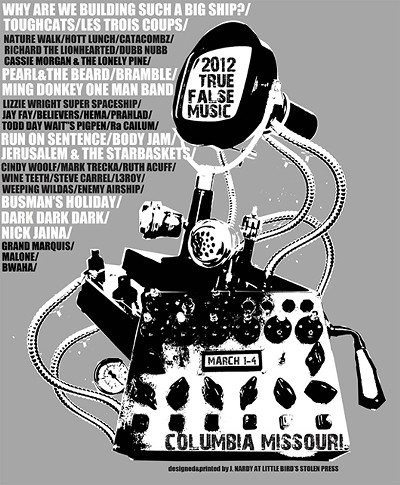