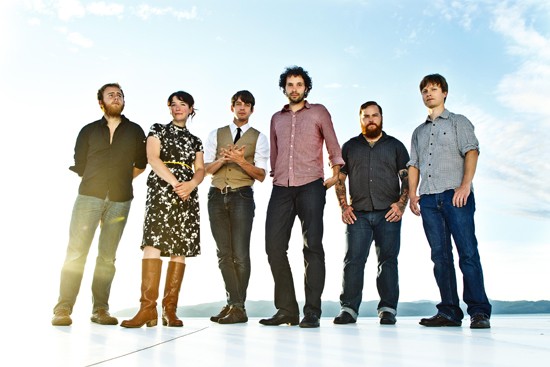 In this week's RFT, Senior Music Writer Roy Kasten chronicles the story behind Blind Pilot, a rising Portland folk-pop band touring behind its sophomore album We Are the Tide (produced by Tucker Martine, best known for his work with the Decemberists and Laura Veirs). The band performs at Plush (3224 Locust Street, 314-535-2686) on Friday, March 3.

In this story outtake, lead singer and songwriter Israel Nebeker gives a glimpse into his songwriting process and shares a stream of the track "White Apple."

Roy Kasten: As a songwriter, do you keep a regular notebook or journal for ideas?

Israel Nebeker: I keep a journal that has whatever I find interesting in it. It's funny, those things I write down never end up in songs. But it's an important part of writing to always be listening and writing. I'll include bits of conversation I hear, with the intention of using them in a song, but I rarely go back and use them, at least not consciously.

Can you talk about how a song like "White Apple" comes about?

Often times, I'll write down ideas that are interesting, but for whatever reason they won't become songs. They won't grab me enough to finish. The first lines of ["White Apple"] came to me while I was riding through the Redwoods. But it took me over a year to write the song. It was still there, the idea, and I sat down to figure out what the idea was about. That's a pretty good example of how it goes with me. I almost never sit down and think, "OK, this is what's going on in my life and this is what interests me so I'll write a song about it." I have to put myself in a place where I'm writing, and I just listen to what's in the air and see what comes out. That's how that song got finished. I can't speak very well about the process. I'm still learning for sure.