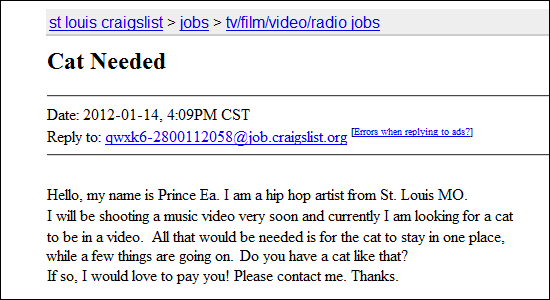 He would never say it like that, though, because he is a gentleman. In a world where many hip-hop starts are accused of being hyper-sexual misogynistic jerks, Prince Ea proves 'em all wrong. A smart, driven man with a smooth flow and clever lyrics, Prince Ea would never stoop to begging for pussy.

He does, however, need to borrow a cat to star in his next video. If his past video for "Backwards Rappers" is any indication, your cat might end up being an internet superstar.

This Craigslist post is from last month, so it might be too late to offer up your kitty friend, but it's worth a shot. Now your cat can be famous somewhere other than I Can Has Cheezburger.