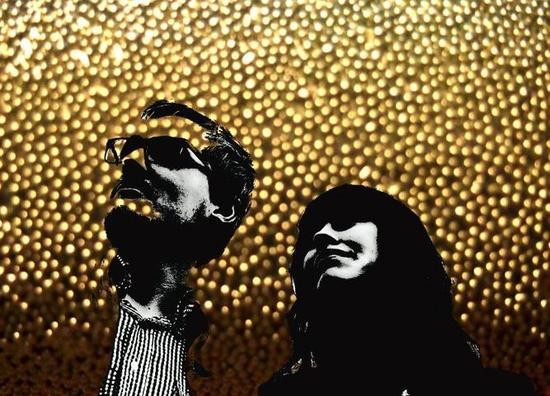 Lantern Lights is the nimble pop project of Gareth Schumacher and Kari Wasoba. The pair will release their first album tomorrow night at Foam Coffee and Beer (3359 Jefferson Avenue) -- the self-titled effort was the subject of a recent Homespun column.

You don't want to wait on this band. Wasoba and Schumacher are moving to LA in the next month, and this will be your only chance to catch the duo in St. Louis until it's no longer their hometown. And while Lantern Lights is brand new, both its members have long participated in this area's music scene. Christian Schaeffer asked them about the ups and downs of making music in River City and why they're making the move.

Christian Schaeffer: You'll be leaving St. Louis soon. Where are you headed, and what awaits you there?

Gareth Schumacher: We're headed to Los Angeles. It's been Kari's dream to move there since she was 18. Plus, she moved to New York for me while I finished school so I owe her one. What awaits us is a bit unknown. We'll have to figure out a way to start performing our songs and building some awareness of the Lantern Lights record. Ryan and Dan have been awesome collaborators but we can't take them with us, so I guess we'll be looking for a new rhythm section.

Kari Wasoba: It's a little scary but luckily we have friends out there, so we won't be completely without a tribe.

How has this town's musical community aided your own development as musicians?

Wasoba:The bands in this city are so different from each other and have such a unique sound for themselves, it makes it challenging to see how you can carve your own place here as well. We have so much support here it sort of blows us out of the water.

Schumacher: We really do. For my part, practically everything I know about being in a band, playing shows, and being part of a scene I learned in St. Louis. When I joined my first band (which became The Floating City) twelve years ago, I had no idea how to write songs or play in front of people. I just wanted to play loud music with my friends and we would figure out the other stuff eventually. We happened to get involved in a scene that included some uncannily talented bands, so creatively I benefited a lot just by going out and seeing amazing shows by people I knew and liked. My musical life was really shaped by all the people I hung out and played music with, and that was something I missed terribly when I first left in 2006. When Kari and I moved back two years ago the first thing I did was produce Humdrum's second album, and then I ended up joining the band because I had so much fun. So for the past two years I've been making records, playing a lot of guitar, and now we're putting out the Lantern Lights album. As musicians we couldn't ask for a more positive and supportive community. What is St. Louis' music scene's greatest strength?

Wasoba: When Lantern Lights started playing in New York, we were really surprised to see that most of the bands were really competitive. We had bands even make comments to us at shows that were sort of weird and unnecessary. In St. Louis, musicians are excited to play shows with each other and be entertained and learn from each other. Let's be honest. None of us are earning our livelihood in doing this. We're proud of the musicians we know. We get kind of proud of the people we don't know. It's fun!

Schumacher: Ditto. I would also add that there are a lot of amazing venues right now that are booking really savvy shows. This is a great time to be playing music in St. Louis. There's KDHX, which I think is a huge asset to local music and just awesome all around. Lastly, there are some wonderful (and affordable) recording studios all over town. And some very talented engineers.

Wasoba: I think it could be said that sometimes musicians in St Louis don't take themselves as seriously as maybe they should. Our community is also pretty spread out.

Schumacher: I tend to agree, especially about the community being spread out. If creativity and collaboration is going to happen I think people need to live near each other. I think this is starting to happen in certain pockets, like the Cherokee Street area, but it's not always easy.

What will you miss the most of this city and its music?

Schumacher: On the music front, there are some super compelling bands around, and moving will make it harder to keep up with what they do next. It feels like there's a lot of momentum pushing everyone forward, which is really exciting; I'll miss being a part of that. But I think the hardest thing will be leaving our musical family here. We have an amazing group of friends and bandmates who are pillars of support when it comes to us. I think the future holds great things for all of us, but it's still hard to say goodbye.