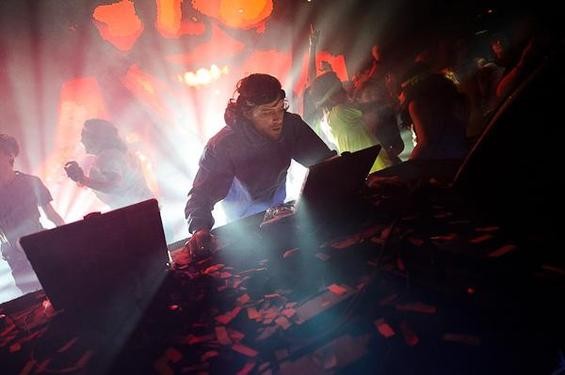 Update, 3/22 Our mystery Girl Talk party host is Chiara Andriole, whose story you can find in the comments. Pin-Up Bowl, evidently, is where you can find Nirvana fan mash-up kings.

Last year's deluge* of coverage upon the 20th anniversary of Nirvana's Nevermind included just about every perspective on the punk-breaking landmark. Spin asked musicians to explain what the album meant to them, and Girl Talk's Gregg Gillis included an anecdote about St. Louis:

I played a show in St. Louis recently, and these kids invited us back to their apartment. Everyone was playing a bunch of new bands, so I got on YouTube and played "Drain You." My friends were, like, "Yes! This is what we needed to hear at five in the morning." The younger people were, like, "Yeah, cool." They were feeling it, but it's different if you lived through it.

It's a little get-off-my-lawn, and Gillis has made himself a living off the kids whose taste he's questioning (however gently and with whatever good intentions). But it's still a cool story, and we give him major props for not being too cool to hang out with his fans.

He's probably referring to one of the two shows he played here in early 2011. First in January at the Pageant and then at Webster University in April. The latter seems a little more likely, doesn't it? Either way, if you were the host of this late-night visit from the mashup king, we'd love to talk to you. Email me: kiernan DOT maletsky AT riverfronttimes.com or comment below.

*So heavy was the deluge that we are just now finding this.