Five Bible Verses Creed Should Have Paid Attention To 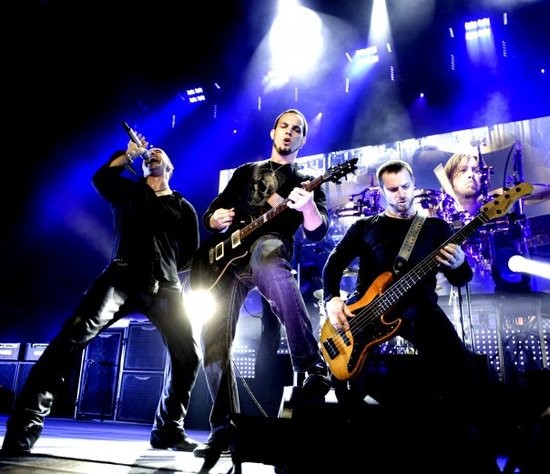 These days, any old band can come out as Christian (even ICP) but the title used to come with a heavier dose of Savior swagger. And maybe more guilt. Because Creed recently announced its plan to grace the Pageant (6161 Delmar Boulevard, 314-726-6161) with its divine presence May 26, we decided to harken back to the lessons Scott Stapp and company have taught us since their early '90s heyday -- and the lessons they should have learned. If being a Creed fan isn't technically a sin, being in Creed seems to include a heavy handful of them, packed in there with religious gestures, overbearing sanctity and deep, guttural growls. But in the beginning, there was God. Below is a list of the top five lessons we wish the band had learned from its man upstairs.

5. "A man that hath friends must show himself friendly: and there is a friend that sticks closer than a brother." -Proverbs 18:24

For argument's sake, let's call that friend a bandmate. In 2004, ironically the same year that Creed's Greatest Hits album hit shelves, the band broke up not long after a particularly embarrassing concert at Rosemont, Illinois' Allstate Arena. Lead guitarist Mark Tremonti eventually cited the biggest issue as singer Scott Stapp before claiming the foursome would never reunite (and then, as evidenced by this tour, eating his words). In the time between the band's first and second coming, all of the members not named Scott Stapp banded together for a post-Creed side project called Alter Bridge. If they were treating him as they would want to be treated, signs suggest that the guys just wanted to be left alone.

Because his first album, 2005's The Great Divide, did not sell enough copies to fill the CD bins at Goodwill, Stapp has announced his plans to go solo yet again with a forthcoming double-disc concept album entitled Between Lust and Love. You might already have guessed that the concept is -- of course -- lust versus love, with one disc devoted to exploring each theme. This is one idea that is absolutely sinful (in the bad way). Who's lusting after Stapp's solo career? 3. "A good name is rather to be chosen than great riches." -Proverbs 22:1

So how did they end up with Creed? To be fair, the band was originally formed under the pseudonym Naked Toddler, which smacks less of overbearing piety than it does of a court-mandated ankle bracelet. Although Stapp recently announced his plans for a concept album, you could argue that Creed is, in its entirety, a concept band -- that concept being "Eddie Vedder sings overwhelmingly symbolic interpretations of the lessons in Veggie Tales." And the name for it all could be way, way worse. (It could be P.O.D.)

2. "No one can serve two masters. Either he will hate the one and love the other, or he will be devoted to the one and despise the other. You cannot serve both God and Money." -Matthew 6: 24

All of this said, Creed has some legitimately amazing qualities. Around the time the band first regrouped in 2009, Slate's Jonah Weiner covered these in a behind the-Behind the Music-style piece for the online magazine, and in most cases, he is 100 percent correct. But in the grand scheme of concept reunion tours that follow a middling album with a metaphorical title (Full Circle) that followed a standard reunion tour, there are few better motivations than the holy dollar. And Creed is charging a lot of them.

1. "What good will it be for a man if he gains the whole world yet forfeits his soul? Or what can a man give in exchange for his soul?" -Matthew 16: 26

It sounds like this man is selling out -- perhaps by reselling his most popular album, the one that hit diamond level in addition to being certified eleven times platinum. Although St. Louis will only be honored with Human Clay on this tour, select cities have earned two times the Creed, with the first night dedicated to the band's (six times platinum) debut, My Own Prison. Tickets cost $55 to $75, roughly five to seven times the price of purchasing either album on iTunes and rehashing the glory days alone in your apartment over some Maker's Mark. In exchange for $75 of your soul, however, you get a primo spot in front of a living, breathing god complex.