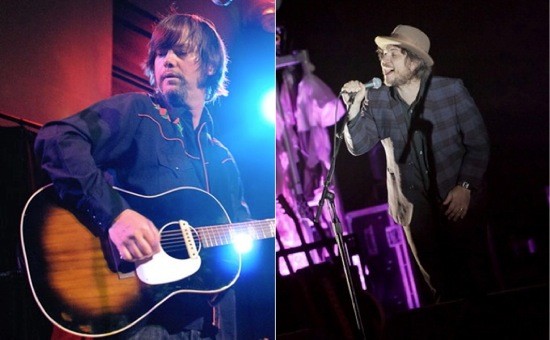 Over the weekend, Billy Bragg announced that he and Wilco would release a third installment in their Mermaid Avenue series. The albums draw inspiration from Woody Guthrie's notebooks of unreleased lyrics. Also drawing inspiration from that source is Jay Farrar, who has collaborated with Will Johnson (Centro-matic), Anders Parker (Varnaline) and Yim Yames (My Morning Jacket) for a tribute of his own entitled New Multitudes. That's out next week on Rounder Records.

Wilco frontman Jeff Tweedy and Jay Farrar were bandmates in Belleville's Uncle Tupelo, and the split wasn't especially amicable. The two have gone their separate ways, putting the experience mostly behind them though never going so far as to reconcile.

The Guthrie tributes put them as much in the same conversation as they have been in years, even if that conversation is mostly among fans and not those actually involved in making the records. The timing isn't all that surprising -- this year marks Guthrie's 100th birthday. The Mermaid Avenue album will come with a package called Mermaid Avenue: The Complete Sessions including the first two installments and a documentary on their making.