The Ten Biggest Presidential Endorsements by Musicians in the 2012 Campaign 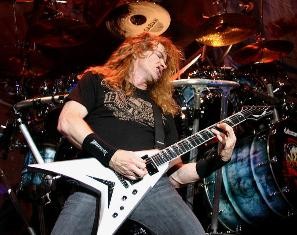 Megadeth rocker Dave Mustaine raised a few collective eyebrows this week when he endorsed former U.S. Sen. Rick Santorum's bourgeoning presidential bid. The former Pennsylvania senator has been gaining steam as of late after prevailing in a trio of February contests, including Missouri's non-binding primary.

After noting to musicradar.com that he hopes "whatever is in the White House next year is a Republican," Mustaine listed off the negatives of the last candidates standing in the GOP field. He expressed concern about how former Massachusetts Gov. Mitt Romney made so much money and called former House Speaker Newt Gingrich an "angry little man." He also voiced some skepticism about some of U.S. Rep. Ron Paul's political positions.

Then Mustaine got around to Santorum:

"Earlier in the election, I was completely oblivious as to who Rick Santorum was, but when the dude went home to be with his daughter when she was sick, that was very commendable. Also, just watching how he hasn't gotten into doing these horrible, horrible attack ads like Mitt Romney's done against Newt Gingrich, and then the volume at which Newt has gone back at Romney... You know, I think Santorum has some presidential qualities, and I'm hoping that if it does come down to it, we'll see a Republican in the White House... and that it's Rick Santorum."

Although Slate writer Dave Weigel says that "Mustaine is one of the most outspokenly conservative men in metal," it could be argued that Megadeth is one of the more challenging bands utilizing political messaging. For instance, try to interpret the message behind "Peace Sells" without experiencing a little confusion. And it should also be noted that Mustaine hasn't always been complementary of Republicans.

In any case, Mustaine may be the first musician of note to endorse Santorum, but he isn't the first to weigh in on this year's crop of candidates Here's a sampling of the politicians other musicians are backing during the 2012 presidential contest.

Gene Simmons (Mitt Romney) The KISS bassist has tended to be more right-leaning than some his rock peers, especially on the topic of Israel. Although he says he voted for Obama "last minute," Simmons told FOX News in January that he's backing the former Massachusetts governor's presidential bid.

Kid Rock (Mitt Romney - sort of) While Kid Rock probably can't be counted as an active presidential endorser, he did allow Romney to use the song "Born Free" as a campaign anthem.

"I said he could use it and I would say the same for any other candidate," Kid Rock said in a statement. "I have to have a little faith that every candidate feels like he or she can help this country. Without faith, we got nothing."

Kelly Clarkson (Ron Paul) The American Idol caused something of a stir late last year when she Tweeted that she "loved" Ron Paul.

Although she got some solidarity from fellow singer Michelle Branch, Clarkson received a torrent of criticism. Her endorsement coincided with an increased focus on controversial newsletters linked to Paul.

Joe Perry (Ron Paul) After Tweeting that Obama "hasn't done anything close to what he promised he'd do," Aerosmith's guitarist expressed his support for Paul's campaign.

"Media is trying to crush Paul. It's so transparent," Perry Tweeted. "They will smear him every chance, beware! Get your news from lot of different sources." Barry Manilow (Ron Paul) Stating that he he "agrees with just about everything he says," the singer who brought the world "Mandy" and "Copacabana" is yet another musician who backed Paul.

Snoop Dogg (Ron Paul) The Long Beach rapper has been all over the place when it comes to politics. For instance, he said some not-so-nice things about FOX News commentator Bill O'Reilly on Dutch television. And he told Larry King that he's "not down with the Republican Party or the Democratic Party -- I represent the gangsta party."

So needless to say, there should be a great deal of skepticism about what Snoop Dogg says about politics. But he did attract mainstream news coverage after posting a picture of Paul with the words "SMOKE WEED EVERYDAY" stamped on his head. That sentence, of course, is the memorable line in the song "The Next Episode." It also parlays with Paul's squeamish attitude toward drug prohibition.

Wayne Newton (Michele Bachmann) Not every musician picked a candidate with staying power. Newton -- an old standby in the Las Vegas music scene -- decided to back the Minnesota Congresswoman earlier this year.

Bachmann eventually flamed out after her victory in the Iowa Straw Poll. She is now shooting down rumors that she'll soon be on Dancing with the Stars.

Kinky Friedman (Rick Perry -- or so it seemed) One of the odder endorsements of this election cycle had to come from Friedman, a country music singer who's long been active in politics. Friedman actually ran against Perry as an independent in 2006, and was considered a somewhat serious contender. While Perry won re-election that year decisively, Friedman wrote in a Daily Beast article that he holds no hard feelings.

"He is not only a good sport, he is a good, kindhearted man, and he once sat in on drums with ZZ Top," Friedman wrote. "A guy like that can't be all bad." But the Kinkster has since clarified his comments, including at his recent show in St. Louis where he declared Perry an idiot and ensured the crowd he did not have the singer's endorsement.

Like Bachmann, Perry didn't last in the GOP presidential contest. He dropped out after underperforming in every contest he entered before eventually endorsing Gingrich.

Lady Gaga (Barack Obama) The singer -- who has been active in gay rights movement over the last few years - attended a fundraiser for the Democratic president last year. ABC News reported that Gaga "read from what she said was a letter from a fan about the suicide of another fan who had been subjected to bullying."

Jay-Z (Barack Obama) The so-called "best rapper alive" claimed that he's been invited by Obama to the White House several times. He ultimately declined, but added "hopefully, we'll keep him in for eight years so I'll have time to get there."