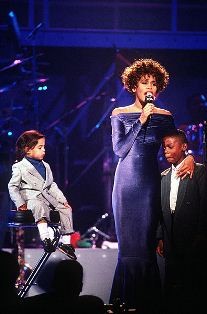 The news of Whitney Houston's death sparked a disparate reaction amongst the music fans. People expressed every emotion imaginable -- distress, distain, reverence and befuddlement. The varied response correlates with Houston's troubled personal life, which gripped the later stages of her career.

But lost amidst some focus on her visible struggles with drugs and her rocky relationship with Bobby Brown is Houston's remarkable impact. From a commercial standpoint, Houston was one of the best-selling female artists of all time -- and one of the most popular musical acts of the 1980s and 1990s. She possessed a voice that was often imitated but rarely duplicated.

Still, Houston's influence extends beyond her commercial appeal or even her talent. She set a number of musical benchmarks that will take a generation or two to be met or surpassed. Here's a look at key points of Houston's musical legacy:

As Rebecca Traister pointed out in a 2006 Salon article, Houston was "one of the only black faces that white girls like me who grew up in the 1980s ever saw in magazines in our dentist's office or in video rotation on early Af-Am-light MTV."

"For many black girls, she was the only young female role model presented in lily-white teen bibles or mainstream entertainment who looked anything like them," Traister wrote at the time.

Stunning debut Houston's self-titled album was the epitome of a monster introduction. The album - which featured classics such as "How Will I Know," "The Greatest Love of All" and "Saving All My Love for You" - is to this day the best-selling debut by a female vocalist. Many of those tunes from that album are still radio staples to this day.

In Houston's Los Angeles Times obituary, Geoff Boucher wrote that "critics moaned that the material was too flimsy for such a prodigious instrument, but Houston reveled in the success."

"She became a major crossover star and, with her church background and relatively wholesome aura, she was the rare female recording star who was young and attractive but not overtly sexualized on stage and on screen," Boucher wrote.

Perhaps unsurprisingly, given the show's history, Houston was not allowed to compete in 1986 for the Grammys' Best New Artist award. She was disqualified from the category because she took part in a duet with Teddy Pendergrass.

No matter. Whitney Houston is the gold standard for debuts by any artist, male or female.

The follow up to Whitney Houston -- Whitney -- set even more records. The first four songs of the album -- "I Wanna Dance with Somebody (Who Loves Me)", "Didn't We Almost Have It All", "So Emotional" and "Where Do Broken Hearts Go" -- went to number one. That gave Houston seven straight number one singles -- surpassing such bands as the Beatles and the Bee Gees. Patriotic fervor Singers belt out "The Star-Spangled Banner" before every American sporting event, but most renditions are generally forgettable. Then there's Houston's performance at Super Bowl XXV, which came right around the time the United States had started fighting in the Gulf War. Notwithstanding the controversy over whether the actual performance was lip-synced, Houston's version of the patriotic tune was so popular that it actually charted on the Billboard Hot 100. Roughly ten years later, Houston's execution of America's National Anthem reentered the public consciousness after the September 11 terrorist attacks.

The Bodyguard conquers all Houston's commercial and creative peak came through an unlikely conduit -- a soundtrack. Even though film itself was a hit, the soundtrack for The Bodyguard was nothing short of historic. The album is far and away the best-selling record for a film of all time, and it also captured the Grammy for Album of the Year in 1994.

An influential voice Houston's commercial and cultural impact is undeniable. Yet one of the biggest takeaways from Houston's career is how she influenced others.

Would there be Mariah Carey, Christina Aguilera or Jennifer Hudson without Houston? Maybe. But Houston paved the way for female artists with serious talent to thrive in the realm of popular music.

Hopefully, Houston's immersive excellence looms longer than her sad decline. For now, the artists she influenced will continue her legacy.