Craig Finn and Mount Moriah at Off Broadway, 2/10/12: Review and Setlist

People still talk -- and most of them were doing so through all but the quietest numbers last night, but I digress and we're only three words in -- of the one-and-only show by the Hold Steady at the Off Broadway Night Club.

It won't happen again. Last night was a different kind of joy.

You know the background: This month Finn, lead singer and songwriter of the Hold Steady, released his first solo album, Clear Heart Full Eyes, recorded in Austin with non-Hold Steady hired guns. The twang and folk and Dylanesque blues shouldn't fit him, but over time this songwriter album will likely sink in. It's about the stories and the way Finn delivers them. But could he deliver them onstage, without the band, or even the concept of a band, one that means so very much to a performer like Finn? It's a meaning us non-performers can only imagine, can only feel when the joy of Finn's performance art hits us like the all-time happy drug.

Craig Finn and Some Guns (the semi-official name of his touring band) more than made good on a different kind of rock 'n' roll promise, with nary a Hold Steady song in the set. 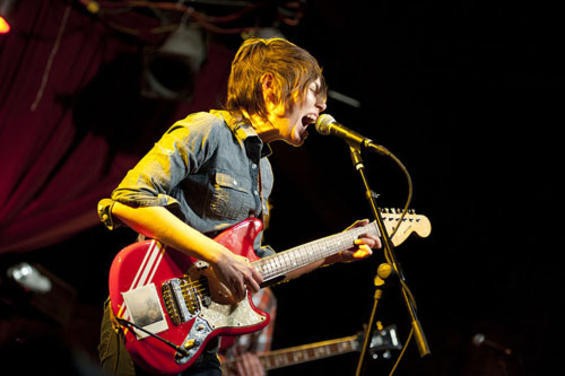 At 9 p.m. sharp, openers Mount Moriah, from Durham, N.C., eased into its first show in St. Louis with "The Letting Go," an older song that set an insinuating tone: "Oh, lover don't you know now all that's left is hope." The pixie-like Heather McEntire has a fetching voice, somewhere between Hope Sandoval and Jessica Lea Mayfield, and her band echoes those artists' mix of mood-twang and expressive psych-rock that's hard to resist should you have a taste for melody, single-note guitar lines and fragrant harmonies. Mount Moriah has tone, above all else, and enough songs -- though the band has only one full-length release, 2011's self-titled album, it chose to dip into unreleased material like "Union Street Bridge" and "Swannanoa" -- most notably the song "Lament," a heart-melting, hand-clapping kiss-off that lingered, like the whole of the too-short set, long and true.

Backed by Ricky Ray Jackson (guitar/pedal steel), James Stevens (guitar), Falcon Valdez (drums) and Alex Livingstone (bass), Finn started off with "Apollo Bay," the first track on Clear Heart Full Eyes, a good level test and a statement of solo intent: "All my days stretch out before me, all my nights get away from me." He lightly strummed a Silvertone acoustic guitar all night, and only flashed his gesticulating charisma, but he smiled and smiled, mostly, looking askance just a few times at the chattering dudes who are always with us. And though Finn's solo material is mostly introspective, darker, believably paranoid, splendidly isolated, he still finds joy in the sound of a good band, and this is a good one, especially with lanky, stoic Livingstone (of the much-missed Austin rock band Grand Champeen) playing simply and focused, and Jackson most often making his pedal steel sound like everything but a pedal steel. If they only caught fire on could-have-been-but-aren't-Hold-Steady songs "No Future" and "Honolulu Blues," they let Finn tell his stories the way he wants to tell them.

That way is often funny, dark side of the betrayed sweet part of the city be damned. Finn is probably the funniest serious American songwriter this side of John Prine and Loudon Wainwright III, especially on "Balcony," the best cut on Clear Heart Full Eyes, a song for all the dudes at the party who come back from the 7-11 to find their date making out with some other dude, or an unreleased song about more dudes, this time from St. Paul, hiding out in a basement, trying to maintain, breathe through their noses and make it through the paranoid night. These couldn't be Hold Steady songs, and Finn knows it, so that palpable joy is really about how good it feels to write and sing good, self-reliant lines - "Certain things get really hard to do when you're living in a rented room ... My pillow still tastes of her perfume ..." -- and know that people will really hear them, the grand, glorious power of rock 'n' roll be damned.

Across some seventeen songs, Finn and Some Guns told stories of breaking up or breaking through, figuring out how to live with the ghosts, figuring out how to let them go, with or without a personal savior, with or without anyone to watch your back. Some of the night's best deliveries were least well-known, especially the new, comic and wise "Going to a Show," - What's true? This is true: "You shouldn't try and fall in love when you're going to a show..." and the desperate "Sarah, I'm Surrounded." When Finn let Some Guns take a break for a few solo songs the not-quite capacity crowd fell silent and smiled and laughed with the singer. With that voice and those chops, Finn shouldn't even think about flying solo this way, but he glides right through because his images carry him, tumbling out, finely, effortlessly pitched between book smarts and street smarts, and always as surprising as life, at its highest highs and lowest lows, should be.

When the band returned for the night's final suite -- there'd be no other return, the lights and house music came up instantly at the end -- it barreled through "Honolulu Blues," got creepy and playful on "Terrified Eyes" and wound down with all the regret available in pedal steel and credit card scams on "Not Much Left of Us." But even without an encore last night felt as if there was so much left, with so many more songs to come, however Finn wishes to share them.

Notes and setlist are on the next page.

Personal Bias: I saw the Hold Steady make its St. Louis debut at a nearly empty Hi-Pointe in 2005, and interviewed Finn before the show. That show and conversation persuaded me that I had found a band and a songwriter I'd be following for a very long time.

Overheard: It wouldn't have been a Craig Finn show in St. Louis without a baseball reference, and the diehard Twins fan congratulated the audience on the Cardinals season, even as guitarist and Rangers fan Jackson clearly still isn't over it.