Who's the Surprisingly Knowledgable Music Fan on Jeopardy's Writing Staff? 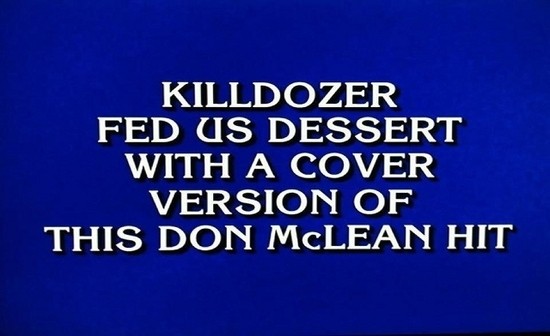 Now that Odd Future rapper Earl Sweatshirt is apparently back from Samoa, one of the music world's biggest mysteries is over. This means we can turn our attention to other matters. Such as this: Just who is sneaking all the indie-rock questions into Jeopardy!?

In the past month, Jeopardy! contestants have been faced with questions about Fleet Foxes and Best Coast. Those are hardly unusual, albeit unexpected. After all, Jeopardy! had an "Indie-Rock" category back in 2009, and it wouldn't at all be surprising if someone on the writing staff kept up on current buzz bands and frequented rock clubs.

What threw us for a loop was last month's question regarding Killdozer's cover of Don McLean's 1971 epic hit single, "American Pie."

Just to be clear, that evening's Jeopardy! contestants were expected to answer a question about this track:

Killdozer was a Milwaukee three-piece that mostly recorded for Touch & Go Records in the 1980s and 1990s. Led by gravel-voiced bassist Michael Gerald, the band recorded a series of albums with soon-to-be-superproducer Butch Vig. These more or less set the template for the weirder side of grunge a la Cows, Tad and Scratch Acid. Killdozer's sound was generally slow and dirty, and Gerald's lyrics generally evoked Deliverance-style portraits of Midwestern life. However, the band was also armed with sharp eyes and ears for detail, and humor that was ironic without being too in-jokey. Tracks like "Hamburger Martyr" melded pulp horror to existential philosophy. Elsewhere, there were odes to the films of Irwin Allen ("Man Vs. Nature"), a wheelchair-bound boy and his faithful canine companion ("Knuckles The Dog [Who Helps People]"), and the death of Flannery O'Connor ("Lupus"). At its best, Killdozer was a uniquely highbrow/lowbrow mix that was as often hilarious as horrifying.

But it was the cover songs that really lightened the mood. Everything from Jessi Colter's "I'm Not Lisa" to Janet Jackson's "Nasty" was Killdozed. What made these covers so sublime was the way they were played completely straight. If not exactly paying homage, these certainly wasn't some sort of Limp Bizkit/"Faith" butchery. To hear Michael Gerald croak out, "I'm not a prewwwd! Ah just want some re-SPECT-uh!" is to behold warped genius.

In 1989, Killdozer produced a whole album of covers, 1989's For Ladies Only. There "American Pie" rests among debased versions of Elvis Presley's "Burning Love," the James Gang's "Funk #49," and the Steve Miller Band's "Take The Money and Run." It's strangely touching.

The point is this: anyone who knows enough about underground music to reference Killdozer's cover of "American Pie" is not some musical dilettante. Whoever made this into a Jeopardy! question knew damn well that it would confuse 98 percent of the viewing audience, and send the other 2 percent into a disbelieving, Facebook-screenshot-posting frenzy. I mean, what's next? "I'll take Jandek for 200, Alex?"

We wanted to know who this anonymous prankster was. So we tracked down the email address of Jeopardy!'s head writer and asked who wrote the questions and whether they would be available for a brief interview. Less than 24 hours later, a publicist responded thusly:

Thanks so much for your note!  We're thrilled to hear that you appreciate our varied musical tastes.  But as a rule, we don't discuss the writing process.

This wasn't a complete surprise. Some of us at RFT Music have worked for entertainment conglomerates in the past, and we know just how impenetrable those walls can be when it comes to the press. Still, it was disappointing. So Jeopardy! writer, let's make a deal, pun obviously intended. If you're out there, get in touch so we can ask some questions. We promise complete anonymity and only the deepest background.

And once we've solved this mystery, maybe we'll look into how the Butthole Surfers' "I Saw An X-Ray of A Girl Passing Gas" recently made it into a trivia quiz on Bravo's Watch What Happens Live.