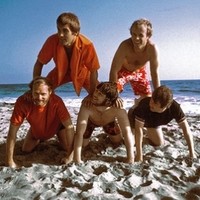 Beach Boys fans are resilient, and they'll get over it. I want to begin there, because it's important to remember that the news that recently broke about the Beach Boys' reunion performance at the Grammys is no more than the fifth most embarrassing thing Beach Boys fans have had to deal with in the band's impossibly convoluted history. A long-awaited reunion combining Brian Wilson's stationary post-breakdown stage-manner and gruff voice with Maroon 5's auto-tuned Jaggergänger Adam Levine?

Sure, whatever! It's not a collaboration with Jeff Foxworthy! We'll always have Pet Sounds, and we'll always trust in Brian Wilson's fragile genius, and that's good--because If you put together the five worst indignities suffered by any of the sixties rock-and-roll patriarchs--the Beach Boys, the Beatles, the Who, the Rolling Stones, et cetera--it would probably be entirely unchanged from the list I'm about to present. Okay, maybe Spies Like Us.

5. Beach Boys collaborate on long-awaited comeback performance with Maroon 5, Foster the People. You may have also noticed that both Paul McCartney and Ringo Starr will be at the Grammys this year. I'm told they'll be performing a rousing version of "Let It Be," with lead vocals by Liam Gallagher and Andy White on the drums.

4. "Howdy from Maui," by Jeff Foxworthy (feat. The Beach Boys) The Beach Boys--probably just Al and Matt Jardine, according to this guy--parody their own work while Jeff Foxworthy talks about his redneck aunt Rose, who can urinate very long distances, even for a redneck.

If you okay a collaboration with a catchphrase comedian and then aren't even credited for your work, you might be a member of the Beach Boys.

While he's at it, he proceeds to tell us that Rhonda was an idiot, Barbara Ann cheated on him, and he probably never loved that little surfer girl anyway. Also, he's a hip, leg, and breast man. In his defense, "Wouldn't it be nice if PhDs / were stroking me with hypotheses?" kind of worked for me. Also in his defense, he was kind of literally brainwashed at the time. 2. Any song from Summer in Paradise, but hey, how about "Summer of Love"? "Doing unto others is the Golden Rule / but doing it with you would be so very cool."

1. Mike Love announces the Tanner family on stage It's bad enough that if you tell someone you love the Beach Boys "Kokomo" is the first thing that comes to mind; it's even worse that if you ask someone to name a member of the Beach Boys, they'll probably lead off with occasional drummer John Stamos. These things just shouldn't happen! The Beach Boys--all the Beach Boys--produced one of the greatest albums of all time and put together several great albums on either side of it! They're an American treasure!

But the worst part of all is that, thanks to this appearance on Full House, if you tell someone between 18 and 34 that you love the Beach Boys, they will, in the absence of other evidence, assume you look and dance like this:

If you watch this long enough while playing 15 Big Ones, it locks in all at once and you reach satori.