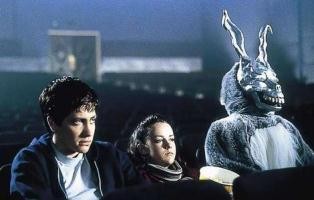 Donnie Darko is one of those films with much more staying power than anybody expected, especially to folks who are constantly followed around by giant rabbits.

The movie isn't exactly everybody's cup of tea, but there's no question that the 2001 Jake Gyllenhaal vehicle managed to develop a cult following. The same could be said for the film's soundtrack, which features a raft of seminal tunes from the 1980s.

For the very special people that enjoyed the film's soundtrack and are obsessed with the Rock Band video game series, take heart. Today marks the release of "Head over Heels" by Tears for Fears as downloadable content for Rock Band 3.

While "Head over Heels" was a very popular song well before Donnie Darko, the track probably regained some steam after it played during the iconic scene introducing Donnie's high school:

"Heads over Heels" is actually the third song from the Donnie Darko soundtrack to make into the Rock Band music catalog. Echo and the Bunnymen's "The Killing Moon" was released as one of the 83 songs encased in Rock Band 3, while Joy Division's incomparable "Love Will Tear Us Apart" was released as DLC last year.

To commemorate the release of the "Head over Heels," here are a few other songs from the Donnie Darko soundtrack that will hopefully be released for Rock Band 3 before the world ends in a convoluted manner:

"Under the Milky Way" by the Church Australian bands are well-represented within the Rock Band universe. There are, for instance, six songs from Wolfmother [including "Woman" and "Joker and the Thief"] and two songs from Silverchair ["Tomorrow" and "Straight Lines"] available as DLC. There's also an entire game packed with live renditions of AC/DC tunes. But the Church's biggest hit hasn't made its way into Rock Band just yet. While the tune wouldn't be the most challenging endeavor in the game, it may be a nice cool down song after chugging through selections from Cannibal Corpse or Dream Theater.

"Never Tear Us Apart" by INXS Speaking of Australian bands, this classic tune by INXS is the opening song during the director's cut of film [the theatrical version features "The Killing Moon"]. INXS most famous song - "Need You Tonight" - was released as an on-disc song for Rock Band 3. And since Harmonix hasn't released another other songs from the band as DLC, it's not out of the question that this song could eventually be in the game.

"Notorious" by Duran Duran While we may sometimes doubt our internal commitment to Sparkle Motion, the same can't be said for Duran Duran's contributions to music gaming. "Hungry Like the Wolf" was released as an on-disc song for both Rock Band 2 and Guitar Hero 5, while "Rio" and "Girls on Film" were released as Rock Band DLC in 2008. Now that most Rock Band 3 DLC incorporates keyboards, the song that plays during Sparkle Motion's iconic dance sequence would be a welcome addition.