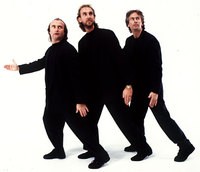 The key change is an essential device in the pop canon. Play song, move chords and melody up a half step or so, continue in new key until otherwise noted. It's simple, really, and often effective, which is why it has been employed to the point of abuse. Here are the six best key changes in pop music.

6. Genesis - Invisible Touch (2:42) First things first, Invisible Touch is not the big shark jump in the Genesis catalog. The title track is not Phil Collins' pop takeover of the prog rock band. There is plenty of musical ambition in the song. That synthesizer interlude between choruses destroys. And something about the upward shift on the repeated final hook comes off like something Yes would do. Every prog band went through an identity crisis in the 1980s, and "Invisible Touch" may have alienated some diehards, but it's a hell of a lot better than, say, "Owner Of A Lonely Heart."

4. Stevie Wonder - I Just Called To Say I Love You (3:00 and throughout) I feel a societal pressure to hate on "I Just Called To Say I Love You," but I can't. It is a hokey love song by a respectable artist. "Silly Love Songs" by Sir Paul without the self-awareness. Stevie manages to underplay the "no, you hang up" sentiment, just like he underplays the key changes that occur almost ever chorus. No big deal, just calling to say he loves you, just moving the chords up a bit. Just repeating most of the song with a vocoder. Ain't no thing. 3. Dionne Warwick - Do You Know The Way To San Jose? (1:41) If this were a list of the greatest recordings of all time, Dionne Warwick's version of "Do You Know The Way To San Jose?" would certainly make the cut. Her take on Burt Bacharach's best song is flawless, but the arrangement is even better. When those horns take over, the song propels so far forward that the half step slide-up almost goes unnoticed. Dionne dives in, totally owning the high note on "L.A. was a great big freeway" and tune stays up until the final fade-out of "bah bah bah bahs." With the exception of Jim O'Rourke, who might have the lyrics do "Say A Little Prayer" tattooed on his lower back, Burt Bacharach has an understated influence among modern artists. But imagine there's no Bacharach: no Costello, no Sufjan, no Yo La Tengo. It's easy if you try, but why would you want to?

The commonalities between All 4 One's "I Swear" and Whitney Houston's "I Will Always Love You" are many. R&B artists from the 90s covering pop country ballads (John Michael Montgomery originated the former, Dolly Parton the latter) and outselling the originals. Oh, and both climax with highly dramatic key changes. All 4 One's cut leads into the key change with a sax solo - young bands take note, this combination is successful at least 85 percent of the time. Whitney Houston trumps all with her final push in "I Will Always Love You." We get a snare drum hit, a half second of silence, then her "and IIIIIIIIIIIIIIIIIII" comes off like it's the most important thing that has ever happened in your life. All-4-One dropped off the planet shortly after "I Swear" left the charts, unless you count follow up single "She's Got Skillz," which you don't. Whitney might wish she had disappeared. If time is friendly, her drug charges and nightmare reality show will be forgotten. Her key change - and that scene in The Bodyguard where Kevin Costner uses scissors to cut her dress - shall live forever.