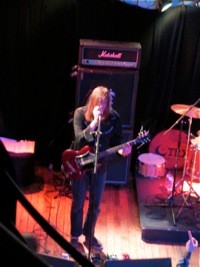 Between Evan Dando's Lemonheads set at Old Rock House on Saturday and the Ryan Adams show at the Peabody this Tuesday, St. Louis is being paid visits by two of the more mercurial personalities in alternative rock n'roll. Both have let fits of erratic behavior over the past several years -- largely due to self-destructive demons -- get in the way of their genius within. And without taking for granted the beauty of their work, it's hard to walk into either one of their shows without wondering which Dando or Adams you're going to get.

But when the news came that the Lemonheads would play its flagship 1992 album, It's a Shame About Ray, in its entirety, it actually made sense. Perhaps the best way to keep Dando on point is to confine him to playing songs in the exact sequence they were recorded; there's less of an opportunity to meander too far off.

The sold out crowd at Old Rock House was greeted with a relatively grounded Evan Dando. Hiding behind an acoustic guitar and his lush, hippie-chic mane, he appeared band-less, not quite ready to lunge into Ray. With little small talk, he eased into "Being Around," the tongue and cheek country-tonker off of Come On Feel.... The song's sense of light-heartedness would serve as a fitting theme for the evening.

After strumming through a handful of serviceable numbers on his own, and as a collective sense of anticipation started to brew among the buzzed-out 30-something crowd, Dando's hired guns Chuck Treece (drums) and Fred Maschernio (bass) took the stage. And just like that, Dando fired out the classic Eddie Van Halen-meets-Bob Stinson opening riff of "Rockin Stroll" -- the opening track from Ray. The Old Rock House suddenly transformed into deleted scene from the movie Reality Bites.

Mascherino filled in all the back up vocals, adequately plugging the void of Juliana Hatfield's signature lines in "My Drug Buddy" and "Bit Part." Treece and Mascherino's feet will likely be throbbing by the end of this tour, as Dando kept them on their toes throughout the night. After a punchy rendition of the beautifully desperate "Rudderless," Dando inexplicably detoured into a suspect version of Danzig's "Mother," as if the 90's nostalgia meter wasn't already buried. Seeing Dando live makes you realize that his guitar chops are mostly overlooked. For as aloof as he may come off, the guy carries the weight of two players easily. This rang particularly true on non-Ray tracks "The Great Big No" and "Pittsburgh."

After strumming through the final chords Ray's closer, "Frank Mills," Dando teased the crowd by playing a few bars of the band's ever-popular cover of "Mrs. Robinson." Having always shown some resentment towards the song, Dando only made it through a few lines before he hit the brakes and confessed, "I can't even fake it," and quickly started in the post-Ray songs that served as the encore.

Behind the band hung a huge projection screen running hand-shot footage of driving through urban architecture, the Grand Canyon, and other random scenes of killing time. As the set drew closer to its end, video ran of what was presumably the band's bus cruising southbound on I-70, approaching downtown, on its way to the club.

After 30+ songs, the set ended with a freaked out version of "Rick James Style," with Dando repeatedly pleading "I don't wanna get stoned/I don't wanna not get stoned," as Mascherino wailed on the guitar and the band's roadie held down bass duties. As luck would have it, St. Louis saw the true Evan Dando: still conflicted, but focused and talented enough to pull it off regardless. Critic's Notebook: Overheard: By multiple concertgoers: "How high/strungout/drunk do you think Dando is right now?"

Personal Bias: This particular music scribe would have walked out semi-bummed if he didn't get to hear "Pittsburgh." Not the case.

Setlist note: Feel free to fill in the gaps below. I thought tracking the set would be easier since the band was playing an entire album straight through. Also not the case.

Being Around (acoustic) ? (acoustic) ? (acoustic) All My Life (acoustic) Outdoor Type (acoustic) Rockin Stroll Confetti It's a Shame About Ray Rudderless My Drug Buddy The Turnpike Down (Pollen Mask interlude) Bit Part Allison's Starting to Happen Hannah & Gab Kitchen Ceiling Fan in My Spoon Frank Mills (Mrs. Robinson teaser) Hospital (acoustic) ? The Great Big No Why Do You Do This to Yourself Tenderfoot (Smudge) Pittsburgh ? Break Me In the Grass All Wine Colored No Backbone Layin' Up With Linda (G.G. Allin) Ride With Me Divan (Smudge) Rick James Style