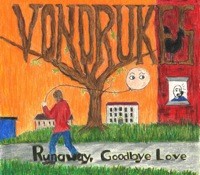 The Vondrukes, winner of the RFT's Best Country Band (Alternative) in 2011, just released a full length called Runaway, Goodbye Love. The album is the subject of this week's Homespun column, and in it Christian Schaeffer applauds the band's overall feel: "Fans of good-natured alt-country can stagger along to many of the tracks here." Read the rest of his review and listen to standout tracks "Everything But Fine" and "Take it Away" below.

The Drive-By Truckers may have crafted a new subgenre solely with the title of 2001's Southern Rock Opera, and traces of that fine band pop up here and there on the Vondrukes' debut LP, Runaway, Goodbye Love. Like DBT, the sextet finds two singer-songwriters (Jeff Griswold and Bob McKee) working with heartland twang and country rock, adding occasional flairs of drama and extended narrative. Runaway will never break your heart like a Patterson Hood or Mike Cooley song (tall order, that), but fans of good-natured alt-country can stagger along to many of the tracks here. Opener "Take It Away" rumbles with a rockabilly thump and shows the band's three-guitar attack with some Thin Lizzy-like harmonics. Later on the disc, the stop-start guitar workout on "Everything But Fine" gives a little nod to Belleville's best-known cow-punk trio.

This style of streamlined twang is the dominant sound on the album, but a few others sneak through the transom. The minor-key mariachi flourishes give "The Prince of L.A." a fun Latin tinge and a little gravity, even if the lyrics are, at best, stream-of-consciousness one-liners. But even that South of the Border excursion doesn't prepare you for the Incubus-like ambience, ska-guitar upticks and a goddamn Vibra-Slap come to bear on "Maybe Another Day." Coupled with some rock-dude vocal explosions and an interminable seven-minute length, the song plays like a catalogue of Regrettable '90s Musical Tropes. Even the song's main lyrical hook, "No, I won't go see your band tonight," finds the Vondrukes tempting fate -- it's either a small mercy or a cruel trick that "Maybe Another Day" is an anomaly. The band is better at more stylized, often tongue-in-cheek twang-banging, and the clear-eyed "Little Bit Like" takes things home in a nice, big-sky fashion.