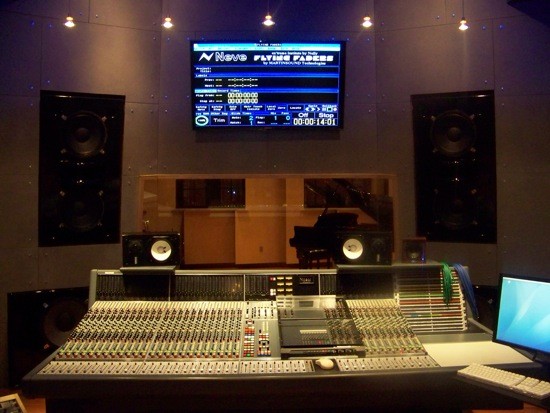 Contrary to what you might think, local legend Nelly's latest collaboration isn't with some up-and-coming rapper or hot-shot producer; it's with St. Louis-based Vatterott College. Located on Laclede's Landing, Ex'treme Institute (800 North Third Street, 888-669-0633) by Nelly opened its doors last November to students looking to break in to 'the biz' through music recording, music production, or graphic design.

"EI by Nelly" hosted a reception last night following the premiere episode of their live streaming webcast, Seviin @ Seven. The webcast itself featured the lovely and vibrant Seviin Li as host, with emcee Murphy Lee and singer/songwriter/Atlanta Housewife Kandi Burress as guests. With a clear focus on making it in the music industry, the show offered some insight on the do's and don'ts, although nerves seemed to be a factor during the interviews, and some of the "Seviin Questions" were outright goofy. Example: Kandi was asked what she does when she "gets the bubblies" during a live interview. Without missing a beat, she replied "Just let it slide slowly."

The after-party provided a chance for invited guests to take a look around the space and do some networking. The building, formerly the Skybox Sports Bar and Grill, retained some of the design elements from the previous business, particularly in the lobby. Exposed brick walls and beautiful hardwood floors give it an 'old St. Louis' charm, but with a very modern and upscale decor. It definitely had the feel of a recording studio with a school inside, as opposed to the other way around.

According to the school's Executive Director Carl Nappa, "I structured the program after the way I learned. This is an actual studio, with students as interns." Nappa, who has been Nelly's personal engineer for years, also picked out the school's gear and brought in Francis Manzella for the studio's elegant design. "From nine to five we're a school," said Nappa, "after hours, we take clients like any other studio."

Classrooms are small, but sufficient for the 5-10 student class size. As the building's only occupant, there's plenty of room for expansion - which the school is already making plans on. "Soon we'll be expanding to teach dance and theatre, and we've already got an amazing voice coach," Nappa explained. Currently the school offers a wide variety of non-degree courses such as Pro Tools, Mixing, and Photoshop. "We're offering an option for someone who wants to learn engineering or beat-making, but doesn't want to spend the amount [a four-year college would cost]. You can come here and learn, then go spend your money on a console. Spend your money on speakers. Get yourself a rig so you can go right to work!"